A look at optimal merchandising methods for organics. 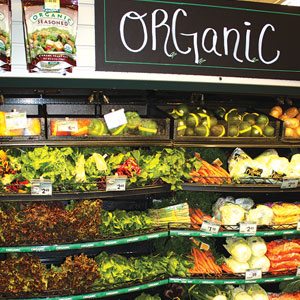 The best way to merchandise organically grown fruits and vegetables within the supermarket’s produce department has been a long-time topic of debate. On one hand, do you segregate all organics into one section? Or integrate organic produce next to its conventional counterpart? This question started popping 15 years ago, when the USDA’s Agricultural Marketing Service implemented its National Organic Program (NOP), thus legitimizing this growing method to the masses. Today, the answer to this selling uncertainty is about as definitive as the scarecrow character’s ultimate directions in the 1939 classic movie, The Wizard of Oz: “… some people do go both ways.”

“For years, we integrated our organic produce,” says Richard Stiles, director of produce and floral for Redner’s Markets, a Reading, PA-chain with 44 markets and 13 quick shoppes in Pennsylvania, Maryland and Delaware. “Then two years ago, I started in a few of our newer stores to put all of our organic produce together and create a destination point. It’s had an impact on sales.”

Driving this growth is consumer demand and availability of organic produce.

According to the Washington, D.C.-based Organic Trade Association’s (OTA) 2016-published U.S. Families Organic Attitudes and Belief’s Study, 84 percent of families said it was important to choose organic when shopping for fruits and vegetables.

“Organic buyers tell us their choices are guided by the desire to provide the most healthful, nutritious foods for their families,” says Angela Jagiello, associate director of conference and product development for the OTA.

At the same time, consumers do differ in terms of their involvement with organics when it comes to knowledge and beliefs about the products themselves, according to Bellevue, WA-based The Hartman Group’s Organic & Natural 2016 report. For example, “the most involved organic users (24 percent of consumers) believe organics encompass a set of federal standards that represent ‘a good place to start’,” says Laurie Demeritt, chief executive of The Hartman Group. “Such shoppers echo beliefs like ‘at minimum, it’s better than conventional for me, animals, the planet and workers, but it doesn’t take every important factor into account.’ More conventional organic users (24 percent of consumers), believe organic is a set of federal standards that regulate farming practices, pesticide use and animal welfare. These shoppers might say, ‘It’s better for me and my family, and also good for the planet.’”

This same report finds organic users continue to skew toward having a higher income, higher education and younger age. Forty-two percent of Millennials say they buy organics compared to 32 percent of Baby Boomers.

On the supply side, increased availability means retailers have a chance to build organics into a more robust category than ever before, says Laura Grossman, organics customer group manager — sourcing,for Robinson Fresh, Eden Prairie, MN.

Addie Pobst, organic integrity and logistics for Viva Tierra Organic in Mount Vernon, WA, agrees and adds: “Because we have seen a strong demand for organics, primarily apples and pears since that’s what we sell, we have established both North American and South American programs to supply these two categories year-round.”

“Unlike a decade ago, when there was a wide price gap, today there is typically only a 10 to 30 percent price
difference between organic and conventional on commodity items.”

“Unlike a decade ago, when there was a wide price gap, today there is typically only a 10 to 30 percent price difference between organic and conventional on commodity items,” says Robert Schueller, director of public relations for Melissa’s/World Variety Produce in Los Angeles. “As a result, many of the Top 10 retailers will carry conventional or organic, one or the other — and many times it’s just the organic.”

Additionally, there are more imported and specialty organic produce items available now than in the past. “We’re also seeing an extension of the season. For example, now organic ginger is available year-round rather than just a few months. Specialty ethnic items especially have a lot of room to grow in organic,” says Schueller.

According to Grossman, merchandising is the unchartered territory of organics. “Similar to the dawn of the packaged salad era, and on par with the merchandising of value-added cut fruit and vegetable items, retailers are testing different strategies,” she says.

The OTA hosted a panel discussion last summer with several produce merchandising experts, says Jagiello. “Their consensus was retailers could be equally successful with integrating organic produce or segregating, given they had the fundamentals of produce merchandising down. However, it is incumbent upon all retailers when handling organic produce — whether the retailer is certified organic or not — to prevent commingling with non-organic products and contact with prohibited substances.”

That said, the prevalence of one merchandising method over another often depends on the individual store, addsSchueller. “Retailers who are new to carrying organics or trying to build their programs and have a small or medium number of offerings should put these in its own section. Retailers, especially those who offer a large amount or almost all organic produce, should have an integrated program.”

An advantage to an integrated merchandising approach is increased visibility of organic choices for all shoppers.

“Merchandising value added next to conventional organic produce is the ideal display,” says Vicky St. Geme, vice president of marketing for Taylor Farms in Salinas, CA. “This allows the consumer to trade up without moving to a separate section of the produce department, and allows for substitutions when an item is temporarily out of stock.”

“For markets that are in areas that may not have as much exposure to organic produce, integrating with conventional may create an opportunity to educate a customer on the benefits of organic produce,” says Mayra Velazquez de León, president and chief executive of Curtis Bay, MD-based Organics Unlimited.

“A challenge to integration,” says Schueller, “is that it can be harder for consumers to tell which products are offered in organic when they walk into the department.”

On the segregated front, Redner’s Stiles says he saw an increase in sales after grouping the chain’s offering of organic produce into one destination display.“We developed an 8- to 12-foot refrigerated section with signage above calling out organic. This created a big enough section, so even customers who didn’t come in looking for organics could see it, stop, look and buy — especially if the pricing is like conventional,” he says.

Northgate Markets, a 41-store Hispanic retailer based in Anaheim, CA, has been offering organic produce to its customers for three years. “We put all of our organic produce in a segregated display for several reasons. First, it’s a new category for our customers. Secondly, I remember back in the 1990s, when I was working as a produce clerk for Albertson’s and we integrated the organic produce. It seemed confusing and not consumer- or worker-friendly. For example, it’s easier to tell in a segregated set when something needs attention or a section is empty,” says Alfonso Cano, produce director.

Grouping all organics together offers a couple of additional benefits, including providing the retailer with an opportunity to gauge consumer interest in organic produce before committing to a larger area amount of self-space.

Another benefit is the reduced risk of pesticide crossover that could come from conventional produce. “We’re proud that we do the work to avoid pest without the poisoning from restricted chemical pesticides. It would be a shame to have our produce exposed to those at store level from contact with heavily sprayed produce that often doesn’t go through a wash before it hits store shelves,” says Jessie Gunn, marketing manager for Wholesum Harvest, Nogales, AZ.

On the other side of the coin, The Hartman Group’s Demeritt says, “our display and shelving recommendations for organic products are unified as far as we do not recommend specialized sections or ‘stores within stores.’ Too often, specialized sections are overlooked or ignored by consumers who might otherwise be eager to try the products.”

Call Out. Use signage to call out the availability of organic produce.“This could be category signs, shelf strips or danglers. These can help to build awareness and lead to intrigue,” says Robert Schueller, director of public relations for Melissa’s/World Variety Produce in Los Angeles.

Take a successful page out of the large retailers’ organic merchandising book.

“Safeway stores in our area use chalkboard signage at the entrance of the produce department to list what’s available in organic in-store that day,” says Addie Pobst, organic integrity and logistics at Viva Tierra Organic, Mount Vernon, WA. “It makes organic more visible, easier to find and lends an upscale vibe.”

Educate. Educate the produce staff to be able to speak effectively and knowledgeably to the benefits and differences of organic produce, and why it’s important not only to the diet, but to the environment and to the conservation of important resources.

“Act as a resource for your shoppers. Explain the benefits of organic over non-GMO, which only addresses a seed issue. Organic handles both the concerns of consumers from both the non-GMO and the free of pervasive chemicals perspective. Use creative shelf talkers, bin stands and bin drops to help message the importance of organically grown produce,” says Gunn.

Schuller recommends featuring one to three organic items each week in the store’s ad circular to help attract consumers.

“While 30 to 40 percent of a store’s organic ring comes from produce. to be truly successful with an organic program, a retailer needs to go beyond produce and embrace the entire store,” says Schueller.