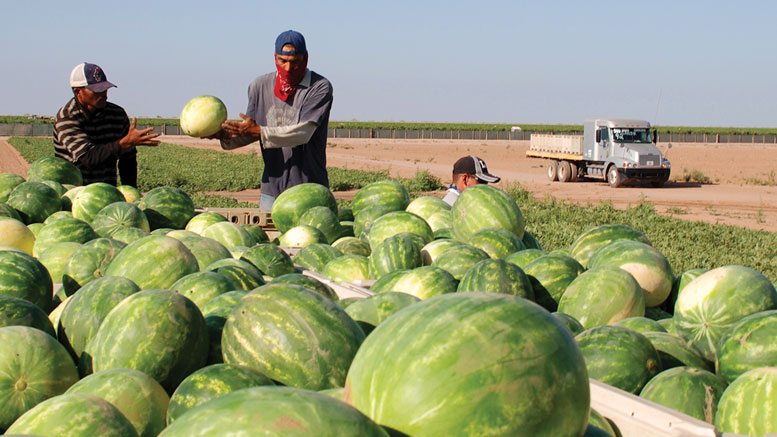 Expansion in volume, variety and seasonality put the industry in position to meet market demands. 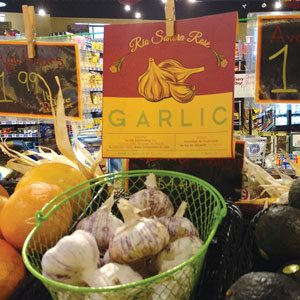 West Mexico already holds a major stake. The Fresh Produce Association of the Americas (FPAA) reports more than 8.2 billion pounds of produce imported via Arizona and California entry points in the 2014/15 season according to USDA Market News data. More than 68 percent of that volume entered through Nogales with a little less than 32 percent entering via the California points.

Continued investment on both sides of the border looks to sustain and grow West Mexico’s position. “The Mexican government continues deploying significant amounts of resources for growers to invest in farm infrastructure such as irrigation systems, cold rooms, packing equipment and post-harvest processing technology,” says Allan Acosta, vice president of operations for Vision Produce in Nogales, AZ. “Growers in the western portion of Mexico, especially the northwestern region of the country, have benefited from such initiatives, as their crop’s quality productivity per hectare has increased.” 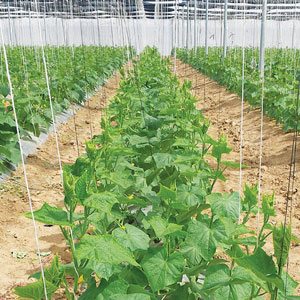 consistent supply. “Products expanded and evolved from Mexico, because growing and packing exceptional quality has been key,” says Jerry Havel, director of sales and marketing. “Retailers learned food-safety protocols in Mexico are top in the industry. Buying quality backed with certifications for food safety makes Mexico a desirable destination for almost all retailers, foodservice clients and wholesalers.”

Based in the current strength of the West Mexico deal, several growing trends point toward an even more fruitful future. Over the past few years, Giumarra-Nogales has seen significant shifts in the timing of volume surges, overlapping growing areas, and extended production periods. “Much of this can be attributed to new varieties, new growing areas, varying weather patterns, and ever-changing advances in growing practices,” says Gil Munguia, division manager.

Chris Ciruli, chief operating officer for Ciruli Brothers, LLC in Rio Rico, AZ, asserts the paradigm for Mexican agriculture is changing. “It is growing and diversifying,” he says. “It’s probably best not to think of West Mexico but of Mexico in general, since growing regions and seasons are expanding.”

The geographic region of West Mexico is expanding — though Sonora and Sinaloa remain the big players. “The increase in production and the extended season is coming from Sonora and Sinaloa,” says Havel. “In the future, though, you will see an expansion of our season from other states.”

Some production is reportedly moving west to Baja. “Although Sonora and Sinaloa have been the most predominant states in the West Mexico deal, farming investments in Baja California are becoming relevant for certain produce items and harvest seasons,” says Acosta of Vision Produce. “The Baja deal, however, lags behind due to the limited availability of irrigation water.”

Ta-De Distributing in Nogales, AZ, is mostly shipping from the two states of Sonora and Sinaloa but is also expanding south into Nayarit and other areas. “Nogales’ West Mexico deal has really now become most of Mexico,” says Robert Bennen Jr., president.

Edmeier of Sicar Farms says the states of Nayarit and Colima have exploded with production. “As technology improves, many more items are being produced with protected environments offering greater diversity.”

As the protected agriculture industry in Mexico changes, Ciruli expects more farming further south in Mexico. “This will allow producers to grow fresh items longer from southern states such as Jalisco, Zacatecas and Puebla,” he says. “These states have been farming for their domestic market for years, but as demand for fresh, quality and flavorful products increases, growers will seek to produce more exportable products.”

Expansion of production area and methods has resulted in expanding seasonality. “Mexico’s expansion of growing regions over the past 10 years, both north and south, has meant a longer season for almost all products,” says Havel. “The vegetable season from Mexico now starts in mid-September and finishes around June first.” 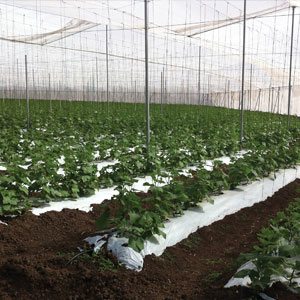 Acosta notes how the expansion of protected crops, encompassing shade houses, greenhouses and macro tunnels enables many growers to extend their harvest seasons. “In many cases now their window overlaps with that of other regions within Mexico and, sometimes, even Central America,” he says.

Lengthening seasonality has become critical for retail. “Consumers expect formerly seasonal items such as grapes, cantaloupe and watermelon to be fairly seasonal year-round now,” says Ray Garrett, owner of Garrett’s IGA Supermarket in Rio Rico, AZ. “Due to the expanding seasonality of Mexico, we have these products pretty much year-round.”

Acosta points out retailers and consumers benefit from extended seasons. “When conditions are there for the harvest season from multiple regions to overlap in the marketplace, buyers find themselves with plenty of available products at very competitive prices,” he says.

Increased seasonality also offers the benefit of consistency in the marketplace. “Retailers are recognizing Nogales as a consistent source for many fruit and vegetable items for a 10-month span,” explains Havel. “With the length of our season we are much more than a seasonal source of supply. We basically are out of the deal for two or three months when California is ‘in’ season.”

“Production has increased on nearly every item in West Mexico,” agrees Edmeier. “Peppers, chilies, tomatoes, limes and pineapples are starting to become more abundant and are being propagated by a few family-growing operations such as Sicar Farms.”

The FPAA 2014-2015 Nogales Import Report attributes the volume changes mainly to increases in volume of watermelon followed by cucumbers, grapes and chili peppers and the recovery in volume of mangos and bell peppers (see FPAA Volume by Season chart below). According to the report, watermelon imported volumes particularly are up 23 percent compared with two years ago and up 8 percent compared to one year ago.

Giumarra reports steady growth of 14 to 15 percent every year on its watermelon production. “This year, we are projecting a 20 percent increase in volume for the fall/winter program and a 25 percent increase for the spring/summer program,” says Munguia.

Watermelon is a large volume item for Fresh Farms as well but table grapes represents Fresh Farms’ No. 1 product from Mexico. The company also sees growth in other veg products. “Hard squashes are becoming a bigger deal for us including butternut, spaghetti, acorn and kabocha,” says Havel. “Green and colored bell peppers and English cucumbers are also increasing for us.”

The Western Mexico region offers opportunities for Vision to expand its grower direct deals. “This year, we are increasing our volume on honeydew, cantaloupes, cucumbers, squash, watermelon and bell peppers all marketed through our La Visiõn brand,” says Donald Souther, Vision’s vice president of marketing and sales development in Los Angeles.

Ciruli reports expected increases in avocado and berry volume as demand remains strong and as more Mexican states produce and export. “The mango category is also expected to see double-digit growth in 2017.”

A more sophisticated West Mexico industry is producing a greater variety of products. “We’re seeing more variety coming out of Mexico,” says Ciruli. “Whereas the traditional items include tomatoes, bell peppers, squash, cucumbers and eggplant, now we’re seeing an increase in items such as broccoli, cauliflower, avocados and berries.”

New presentations of market staples create new opportunities. “We see greater interest in innovative packaging such as stoplight (tri-color) peppers in sleeves, totes or clams,” explains Bennen of Ta-De. “We had to expand our production to meet customer request.”

The more products Garrett’s IGA has available for sale, the more sales it does. “The more variety of products in produce the more likely we are to attract more customers,” explains Garrett. “Mexican produce provided a big share of this new variety.”

Ta-De sees greater interest in ethnic items and ingredients such as garlic. “We expanded our Red Lotus Asian-inspired brand to feature deeper categories in eggplant, peppers and more,” says Bennen. “While previously these items were relegated to the back of the department or to small specialty displays, retailers are now bringing these items front and center. This is a good strategy to introduce shoppers to a new item. For example, putting Chinese eggplant next to the regular Italian variety tells them it’s a good substitute.”

In retail tests this past season, Ta-De displayed its Rio Sonora Rose purple garlic bulbs next to the standard white at the same price point. “Shoppers typically preferred the purple or they purchased both, perhaps planning to use for different preps,” says Bennen. “This increases overall ring in the category rather than cannibalizing SKUs.”

Organics represent another tremendous growth opportunity according to Fresh Farm’s Havel. “Over the past two years, we saw an increase for organic product in all of our fruit and vegetable items,” he says. “Most good growers expanded their programs to make a percentage of their crops organic.”

The support West Mexico receives from its collaborators north of the border has become a valued asset. “Sales of West Mexico products are mostly done out of locations in the southwest U.S. including Nogales, San Diego and even Los Angeles,” says Cano. “The really good communication with these sales people connected to our buyers is an advantage over dealing with offshore growers. The U.S. offices of the West Mexico deal have professional, skilled salesmen making communications on both sides much more effective.”

Giumarra emphasizes communication as fundamental for success. “Well informed buyers confidently adjust promotional timelines,” explains Munguia. “They move from the traditionally available items to what is now at peak quality and volume. The successful retailers have strong relationships with suppliers.”

Continued collaboration between both sides of the border on transportation and staging also increases efficiency. “Mexico has done a great job of staging produce along the northern Mexican border or in the southern U.S. so there is more immediate fulfillment,” explains Cano. “This puts us in a better position for success. Our retail model is just-in-time, so we need to get things in a few days, not a few months.”

Reliability and trust are increasing considerations for the deal. “As FSMA becomes ‘the new norm’ and social responsibility gains relevance, buyers should avoid the temptation of spot buys,” advises Acosta. “They should develop long-term relationships with growers committed to produce safe and socially responsible commodities.”

Forward-looking West Mexico marketers employ technology to add value to their businesses. “We are seeing technology being adopted by distributors because both the expansion in volume and shipping regions means there is more to keep track of,” says Veronica Kraushaar, sales and marketing manager for Continuum Software for Perishables and president of Viva International Partners, Inc., Nogales, AZ.

Kraushaar says some distributors with multiple production areas and growers now keep careful track via software and technology tools. “They want to be able to see, at a glance, the quality of product coming from Grower A versus Grower B, and be able to identify issues to help them make a decision on whose shipments they can rely on,” she says.

These software solutions also translate to retail confidence. “Retailers are looking carefully at vendors who are able to deliver consistent quality and identify issues before they become problems,” says Kraushaar. “Until now, many distributors and even some major chains have used paper tracking logs. These are not only cumbersome and risk getting lost or damaged but are also often inaccurate. Software apps are clearly the solution, and more distributors are using them.”

Another evolving trend is the advent of omni-channel marketing. “You need to get to the customer both in-store and online,” recommends Kraushaar. “The old ad circular sitting by the front door is not going to do it alone.”

Garrett concurs retail is going more digital at store-level all the time. “Any kind of support we get online from distributors or growers is a benefit,” he says.

West Mexico distributors look to online and other innovative activities to support the product. “Increasingly, the savvy produce supplier has both a B2B and B2C strategy via an integrated program that works to pull in the customer,” says Kraushaar.