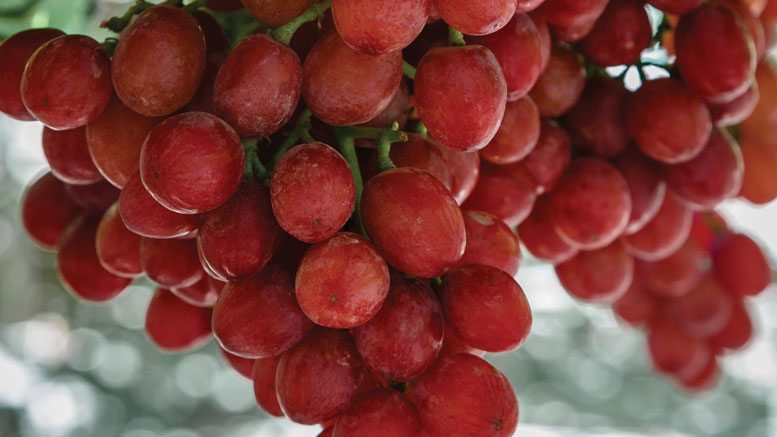 Initial reports indicate weather has been perfect for growing grapes in Mexico and California. 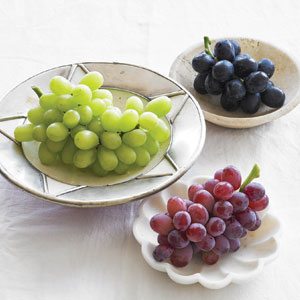 Grapes are on consumers’ minds. For more than a decade, grapes have joined apples and bananas, ranking in the top three of the most popular fruit consumed. According to a study by the California Table Grape Commission, Fresno, CA, 52 percent of grape shoppers in the United States purchase at least once a week and 45 percent make the decision to purchase before going to the store.

“We expect our earliest varieties out of Mexico to start at the end of April or the beginning of May,” says Megan Schulz, director of communications for Giumarra Bros., Los Angeles. “Our season will conclude in June.”

John Pandol, director of special projects for Pandol Bros., Delano, CA, says the desert grape deal is a 10-week long deal loading the week of May 1 through the week of July 3, with the most availability from May 25 through July 3.

Steve Yubeta, vice president of sales and marketing for Farmer’s Best International in Nogales, AZ, says his company will supply grapes from May 8 through June 15.

Initial reports indicate the weather has been ideal for growing grapes in both Mexico and California. Mexico’s harvest is on track to be slightly ahead of California’s Coachella Valley. One of the questions this time of year is: How will the end of the Chilean deal affect the beginning of the spring deal? Pandol says it’s always unknown how much of the Chilean crop will be sent to the United States and how long shippers will try to hold it. He says most retailers switch to desert whites in the first half of May and reds in the second half.

According to Schulz, volumes of spring grapes will be ample enough to offer promotional prices during a time when consumers are starting to gear up for summer travel and parties. “For Memorial Day, we will have promotable volumes of all three colors — red, green and black,” she says.

The three most popular grape varieties are Flame, Perlette and Sugraones. Flame and Perlette harvest in early May, while Sugraones harvest in late May.

Farmer’s Best has several early season varieties from Mexico. Early Sweet is a proprietary variety. It is the earliest commercial green seedless variety out of Mexico, available at the end of April. It has a creamy color, excellent eating quality, and is durable in cold storage and transportation. Passion Fire is the company’s newest red seedless variety. It has large, crisp berries and a cherry color. Its flavor is described as “a sweet apple flavor with high sugar.” It’s available in mid-May. Summer Royal is an early season black seedless grape that has a sweet flavor with a hint of Concord. Its flesh is juicy with tender skin. It’s available throughout May into the beginning of June.

While there has not been a significant influx of newer varieties, it is starting to change, according to Pandol. He says newer varieties were not made available to most growers, or were available under commercial agreements that were unattractive to growers. Even though newer varieties are limited, Pandol estimates up to 20 percent of the spring volume could be called newer varieties.

Pandol points to another factor: most varieties are developed for temperate climates and not low-chill/no-chill climates like Mexico or Peru, so growers need time to adapt and trial varieties.

“The trend in retail is to find better eating, more flavorful fruit for consumers,” says Fuller. “We are seeing new varieties being tested. Our goal is to get the best fruit we can.”

Since spring grapes typically are in high demand, what size of displays is most effective?

“A large, bountiful display with all three colors of grapes will attract consumer attention,” says Schulz. “Research shows a significant portion of grape sales are purchased on impulse, so the more eye-catching a grape display, the better. Display as many varieties as possible for the best result.”

Yubeta believes the bigger the display the better. “We suggest three varieties so customers can choose from different grape tastes with a range of sweetness. Displays are more attractive when they have a lot to offer.”

The more space you devote to grapes, the better your sales will be, according to research from the California Table Grape Commission. Research shows displays of more than 25 feet can increase sales up to 63 percent.

“Creating a display with other kid-friendly snacks will encourage parents to buy grapes and put them in their kids’ school lunches.”

Yubeta emphasizes the importance of displaying grapes in a way that maintains quality. Bags of grapes should be placed side by side and never stacked on top of each other. Also, it is important to keep grapes within a specific temperature range at all times. The quality can be altered and they can become damaged if there is a temperature change.

“Displaying grapes to entice purchase is one of the most important things for retailers to consider for increasing California grape sales,” says Cindy Plummer, vice president of domestic marketing for the California Table Grape Commission. “Grapes are visually appealing and a beautiful display can increase sales. The display needs to be abundant and frequently refreshed.” 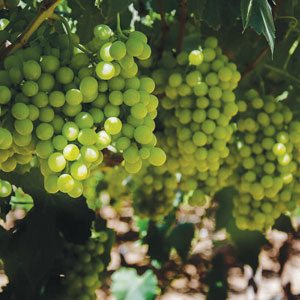 Yubeta suggests retailers promote the spring grape harvest by featuring it in store newsletters, on store websites and on social media channels. Placing grape displays at the front of the produce section will also generate customer awareness.

According to Plummer, 45 percent of grape purchases are impulse buys. “In-store promotions are equally as important as advertising, since most people shop with their eyes; it can be an effective way to support advertising and prompt impulse grape purchases,” says Plummer.

Point-of-purchase materials for California grapes also are available to retailers throughout the season, including danglers, price cards and variety charts/training and merchandising guides.

Ninety-nine percent of the commercially grown table grapes in the United States is grown in California. “The past three seasons have seen a total crop of more than 110 million boxes, with the 2016 season setting a record crop value of $1.85 billion,” says Kathleen Nave, president of the California Table Grape Commission.

Grapes are extremely versatile. Ninety-two percent of consumers use them as a snack; 30 percent use them in a dessert, while 21 percent use them in a salad, according to the California Table Grape Commission. Other popular uses include as an ingredient in a recipe, in a side dish and as an appetizer.

“Grapes are a convenient grab-and-go snack, and pairing them with other snack items like cheese and crackers, is a good option,” says Giumarra Bros.’ Schulz. “For a sweet-and-savory party platter idea, pair grapes with wine and other appetizer items, including cheese, nuts and antipasto.”

“Grapes are a natural part of cheese platters,” says Sun World International’s Fuller. “While many retailers already feature the combination of grapes and cheese, I think there’s room for improvement in a closer alignment between the produce department and the cheese department.”

Yubeta suggests putting cheese, wine and other fruits and nuts around a grape display to encourage shoppers to make a bountiful cheese board. “Creating a display with other kid-friendly snacks will encourage parents to buy grapes and put them in their kids’ school lunches,” he says.

In addition to marketing grapes as a snack, the fruit can be cross-merchandised with a variety of pairings. For example, grapes with bread and peanut butter suggest a quick sandwich. Grapes with bagged salads and salad ingredients spark the idea of a lighter meal as the days get warmer. Grapes with cheese and wine provide the elements for an instant party. Displaying grapes with small individual containers and bags makes them more portable.

When it comes to packaging, Fuller says there has been little change from recent years. He notes, however, there is a lot of interest in new packaging and different styles are being tested.

Pandol notes bags are going back to less rigid plastics, but are maintaining the tote form. He says there’s a wide range in regards to preference for graphics on the packaging — some prefer a lot of graphics and storytelling, while others prefer no graphics. Most, however, have modest graphics.

Pandol recommends a sampling tray or bag of grapes, compiled from shatter. “This avoids customers from picking over bunches and leaving you with bunches that won’t be sold,” he says. “This promotes grapes and helps you to decrease shrink at the same time.”

Grapes are packed with nutrients and antioxidants, including vitamins B, C and K, copper, potassium and phytosterols. Grape skin contains resveratrol, a powerful antioxidant known to help fight breast, liver and colon cancers. Phytonutrients found in grapes may also help fight the flu. Grapes also have been shown to have anti-inflammatory benefits and can help with the regulation of blood pressure.

Grapes are fat-free, saturated fat-free, sodium free and cholesterol-free. While more than 90 percent of consumers think of grapes as an ideal snack, most don’t think to add them to a recipe.

Retailers can boost their bottomline with the proper promotion of spring grapes. “Grapes are a traffic driver in the produce department,” says Schulz.