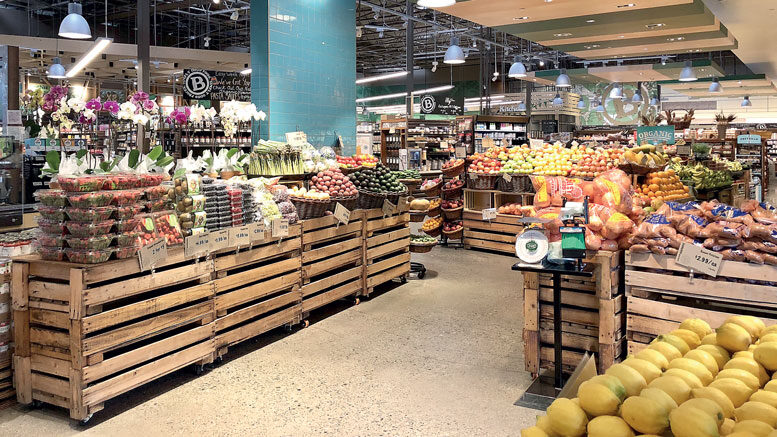 Barons Markets’ produce departments average around 2,000 square feet (stores range from 14,000 to 20,000 square feet). But with produce at 15% of total store sales, the department is a star.
ALL PHOTOS COURTESY BARONS MARKET

For this California gourmet grocery, smaller is better.

Produce is a focal point for fresh at Barons Market, a nine-store gourmet grocery chain headquartered in the San Diego County town of Poway, CA. This fact is immediately evident the minute you walk into the store. Just past the welcoming wall of fresh flowers, plants and succulents, there are hand-stacked displays of apples and oranges in wicker baskets, end caps of freshly picked heirloom tomatoes, and crisp garden-like leafy greens on refrigerated shelves. Several signs throughout the produce department point out organically grown choices.

While large corporate retailers are getting bigger with larger departments and produce SKUs in the hundreds, Barons’ secret to success has been to get better by concentrating on what counts, such as freshness, quality and price. The result? Fresh produce averages 15% of total store sales.

The family-owned and -operated Barons Market was started by Joe Shemirani and his brothers in 1993. The impetus came when Joe’s search for organic foods was stymied by finding only low quantities and high prices. Back then, as Joe’s daughter, Rachel, tells, organic and natural foods were a new trend without the availability, cost, and even taste to back up the buzz. Thus, Shemirani, who in 2018 earned a spot on the San Diego 500 List of Most Influential Business Leaders, started his own grocery.

“The key over the years has gone from getting natural and organic foods at good prices to creating a super easy and exciting in-store shopping experience,” says Rachel Shemirani, senior vice president. “What we’re known for, and the way that we set up our stores, is for customers to be in and out in under 10 minutes. One way we do this is by having about 9,500 SKUs total, rather than the 50,000 or more of a typical supermarket.”

The storewide SKU selection comes on the recommendation of the food panel or ‘Taste Team.’ Each Wednesday at noon, Shemirani, her father, and the chain’s supervisors, managers and buyers taste test and evaluate 80 to 120 products to determine the 10 to 15 items that will make it to Baron’s shelves and replace others.

As she explains, instead of shoppers looking at a wall of pasta sauces, the decision-making is done for them, and the best quality, best-priced, organic or natural sauce is the one available. The same is true for fresh produce.

Produce operations manager Greg Dunn works primarily with three distributors, each of whom buys directly from local farms in southern California, as well as sources further afield domestically, when needed, and internationally such as to nearby Mexico. Dunn also scouts the competition and has cultivated relationships with a host of suppliers. As a result, Barons Market is often able to get items, such as new varietal fruits and vegetables, not typically seen in larger chains.

Stores receive deliveries six days a week. All fresh fruits and vegetables are checked in and immediately put on display. There’s no surplus stored in a back cooler.

“We used to have these giant coolers in the back of our stores because deliveries were two to three times weekly. Since we’ve made this shift to almost daily deliveries, we’re looking at planning new stores that don’t have big produce coolers. Also, more frequent deliveries have made a dramatic difference in shrinkage and spoilage. Having the freshest product also means it will last a bit longer for our customers to enjoy at home,” says Shemirani.

Barons Market stores average 14,000 to 20,000 square feet, with produce departments around 2,000 square feet. At 15% of total store sales, this means that the 150 SKUs in produce — with 25% of these organic and 25% locally grown — make up nearly one-sixth of Barons’ sales in one-tenth of the store space.

Shemirani says the pandemic caused an explosion in demand at retail and, as a result, the produce department ‘grew tentacles,’ as she describes, expanding into other areas of the store. The move sent shrink numbers soaring. Subsequent supply chain challenges and a calculated back-to-basics approach by the retailer reined the department back in, and even cut back a bit, with the goal of efficiency.

“Typically, you have huge displays with blowout sales on produce. Paring back was counterintuitive to our produce managers. The ways we did this, for example, was building displays one level deep with dummied bottoms so they still looked bountiful. Again, with frequent deliveries, we’re buying for one day rather than several. That shift in perspective was really helpful. We’re known for our produce, so there’s only so much cutting back we can do. So, we said no more growing tentacles. Stay within your department,” says Shemirani.

This isn’t to say there are never large displays or cross-department cross-merchandising. Rather, it’s for a limited time rather than all the time. Examples Shemirani gives are charcuterie board displays for the winter holidays built at the front of the store, with wines, cheeses, baguettes, dried fruits and nuts, and barrels of apples and pears. In the fall, there’s a pumpkin patch display with hay bales, gourds, and a guess-the-weight pumpkin contest, while in the summer, fresh melons go big with passive sampling set up to spur sales.

Displays can pop up to catch the excitement of the latest TikTok trend. For example, eagle-eye Barons’ team members spotted a baked feta recipe going viral and capitalized on the moment by building an ingredient display that included cherry tomatoes, garlic and shallots from the produce department.

“Another thing we do well is our fresh-cut programs. Fresh-cut fruit merchandised at the checkout registers is a fast seller. When it’s grilling season, we make a hamburger kit with onions, tomatoes and lettuce. We do a variety of stir-fry kits, too, with different vegetables. These latter products come out of our food panel meeting on Wednesdays, where everyone’s creative juices get flowing as we taste and talk,” says Shemirani.

“In the future, we’re going to focus more on grab-and-go, especially with organic kits. Organic is still strong, even though prices are up with inflation.”

Something the retailer has toyed with is expanding its squeeze-it-yourself juice program from only orange to apple and celery juices.

Barons Market does produce a weekly ad and posts it online. However, everyday low pricing is the norm. Social media, especially Instagram, has proven a potent promotional tool.

Last year, Barons remodeled its oldest store in Point Loma. They partnered with a few local micro-influencers and gave them a picnic basket filled with favorite products, a $100 gift card to shop at the store, and a list of the best local picnic spots. These influencers then provided content and ran contests on their own pages, with the retailer providing $25 gift cards for the winners. The result was greater community engagement and getting more shoppers in-store.

A STORE-FULL OF GOOD EATING

In addition to fresh produce, Barons Market also has several expanded features. These include a hot soup bar, a selection of pre-made entrees, rotisserie chicken, an artisan olive oil and balsamic vinegar bar, a gourmet cheese selection, fresh baguettes delivered daily from a local bakery, an antipasto bar, and a fresh salad bar.

“The salad bar is one of the main attractions of our stores. It came about at our weekly food panel meetings. One of our managers kept saying we should have a salad bar. After dozens of times saying ‘no,’ thinking it would be a disaster, we finally said ‘yes.’ Today, it’s hugely successful. People flock to it. The salad bar was possible because we have a culture where people can try things and suggest things and they won’t be punished if it doesn’t work out,” says Shemirani.

The salad bar has also proven an excellent testing ground for what might sell. For instance, the retailer added gooseberries along with other fresh berries and yogurt in the morning. Gooseberries then ticked up in sales of produce.

“The whole idea is that when you walk into our stores, within 10 minutes, we answer that question, ‘what’s for dinner?’ With more people working from home now, we have customers in some locations that come in daily. We even have customers that shop us three times a day for breakfast, lunch and dinner,” says Shemirani. 

New Jersey Lives Up To Its ‘Garden State’ Nickname