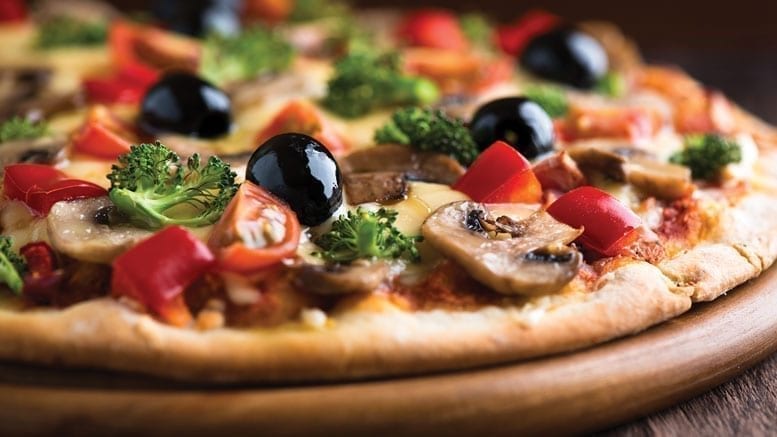 Could ‘better for you foods’ be the key to reversing declining sales?

Everybody likes pizza. In fact, this tomato-topped pie indexes a perfect 100 percent on consumer trial and affinity with a broad range of U.S. residents, according to Pizza, the SNAP Profile, published in 2018 by Chicago-based market research firm Datassential. More specifically, this includes men and women, Boomers to Gen Z in age, households with and without kids, those living in all areas, and equally among Caucasians, African-Americans, Hispanics and Asians.

Yet, pizza as percent of menu items is declining. In 2008, menu penetration reached 38.7% and a decade later was down to 34.1%, according to this same Datassential report.

In an era where the plant-forward movement is gaining popularity, it might be that a greater use of fresh fruits and vegetables as toppings will be the key to pizza regaining menu share. Consider that more than half (52%) of consumers have made diet changes to include a greater amount of plant-based foods, according to a 2017 study by HealthFocus International, a health and nutrition-oriented market research firm headquartered in St. Petersburg, FL. What’s more, even more consumers (57%) see this as a permanent dietary change.

“People always look to eat food that is better for them,” says Bret Thorn, senior food and beverage editor for New York-headquartered foodservice trade publications, Nation’s Restaurant News (NRN) and Restaurant Hospitality (RH). “Even for occasions that are indulgent, people justify this psychologically if fruits and vegetables are part of the meal because these foods are good for them.”

Produce-topped pizzas are not a niche offering specific to vegetarian customers, according to Kristie Waters, vice president of sales for PRO*ACT, in Monterey, CA. “Instead, this appeals to people who have a taste for something outside of pepperoni and cheese and are looking for more culinary uniqueness in pizza.”

The appeal for pizza topped with produce has always been there. However, what we expect to see are new, novel vegetables becoming more prominent and used as a point of inspiration, according to Jackie Rodriguez, senior project manager for Datassential. “Pizza is ubiquitous as a format, and that is a point of comfort for consumers to explore more daring toppings while still having the safety net that is the format of a pizza.”

Information from Datassential’s Menu Adoption Cycle (MAC) tracks the way flavors or ingredients progress through the market, from inception to a point of ubiquity.

Some of the newest and typically most interesting ingredients are found at the Inception stage, such as fine dining, and in the adoption stage, for example trendy restaurants.

VEGETABLES: Mushrooms and onions are also ubiquitous pizza-toppers.
Pizza is the No. 1 application for mushrooms at foodservice, according to Steve Solomon, foodservice director for The Mushroom Council, in Redwood City, CA. “Eighteen percent of all mushrooms grown in this country go to pizza, and 98.6% of all pizza restaurants have mushrooms on the menu.”

That said, mushroom variety growth on pizza over four years shows porcinis up 17%, shiitakes up 23%, creminis up 57% and truffles up 84%, based on Datassential’s Mushroom Trends report, published in January 2017.

A good example of this is the Wild Mushroom pizza, a regular menu item at CPK. The topping is shiitake, portobello and white mushrooms with slivered scallions, cracked black pepper, Romano, mozzarella and Parmesan cheeses with a finish of truffle oil.

“Operators don’t want to have to slice, so we do that for them in a food-safe environment. Beyond this, our biggest seller overall is the 10-pound sliced white. We have slicers throughout the country. That’s because mushrooms make the ride better whole, and the flavor is better and fresher when sliced closer to the point of delivery.”

At Phoenix-based Fired Pie, traditional yellow onions are joined by red onions on the menu. An example is the regional chain’s Pesto Chicken Pizza, with pesto sauce, mozzarella, grilled chicken, tomato and red onion. To source a greater variety of ingredients, co-owner Fred Morgan uses produce suppliers because, “They tend to have some of the freshest products and can get anything you need.”

Nearly 80% of restaurants that serve pizza offer onions as a topping, according to Datassential’s 2017 Menu Trends Onion Study.

“While fresh diced onion is the most common onion topping, many pizzas are also featuring caramelized onions, pickled onions, sautéed onions and even fried onions,” says Mary Humann, publicist for the National Onion Association, in Greeley, CO. “Datassential’s menu study showed that items with caramelized onions sold for $1.74 more on average and those with pickled onions $2.75 more, on average, than dishes with no onion preparation mentioned. Thus, simple prepared onions can really add value to the pizza menu.”

Some of the fastest growing produce ingredients used as pizza toppers include potatoes (up 27.8%) and arugula (up 30.6% in the past 4 years), according to Datassential’s Pizza, the SNAP Profile, research.

As for potatoes, “I tend to see a lot of yellows and reds on pizza because the firm texture of these varieties lend itself to a great mouthfeel and prominent contrast between the crust and the topping,” says Chef RJ Harvey, global foodservice marketing manager for Potatoes USA, headquartered in Denver.

“Beyond this, I think the notion of luxury and indulgence is helping potatoes find a place on pizzas. An example is black truffle and potato with Pecorino Romano cheese. This is not only a stellar combination, but from a cost perspective it balances itself out. We are seeing this in college settings, such as Michigan State University, as well as in restaurants such as Modern Market Eatery (30-unit farm-to-table themed fast casual headquartered in Denver, with their potato pizza with a white Truffle cream sauce.”

According to CPK’s Sullivan, “More unique items we’ve used as pizza toppers are arugula as well as carrots, fire roasted poblano, Japanese eggplant, broccolini, roasted corn and sundried tomato. These are items we use in other dishes on the menu too. Cross-utilization is key to freshness and preventing food waste.”

Another good example is broccolini.

“We’ve offered a blanched broccolini-, chicken- and grape tomato-topped pizza as an LTO,” says Fired Pie’s Morgan. “To come up with trendy selections, we work closely with a few chefs, who in turn work for distributors. They always bring in new products and ideas of ways to use them.”

Unique produce could make for a higher value menu item, according to Waters at PRO*ACT. “This can lend to more profit when compared to some meats that are being utilized as pizza toppers.”

FRUITS. One of the trendiest fruits topping pizza today is avocado. In fact, there are three trends driving the use of avocados on pizza, according to data supplied by the Irvine, CA-headquartered California Avocado Commission (CAC). The first is avocados’ penetration on restaurant menus, with 50.8% of U.S. restaurants offering avocado or guacamole on menus. More specifically, avocado menu penetration in the pizza segment has seen a 155% increase over the past decade. Second is eating food with health benefits trend. Third is the plant-forward trend.

“Eighty-two percent of foodservice operators who use avocados choose to purchase fresh,” says Jan DeLyser, the CAC’s vice president of marketing. “Fresh avocados are best for the pizza category. Slightly under-ripe avocados are often used to hold the fruit’s shape while being cooked at high pizza-oven temperatures.”

There’s a rise in interest in sweet pizzas, says Waters, and in “simple toppings such as whipped Ricotta and fruit such as grilled peaches.”

Although not often thought of in hot applications, watermelon is a fruit that can take heat well, says Megan McKenna, director of foodservice and marketing for the Winter Springs, FL-based National Watermelon Promotion Board. “In the past couple weeks, we have met with a couple pizza chains and discussed watermelon as a topping. The watermelon rind pickle piqued their interest. The pickle was done in a bread and butter pickle style, and they expressed interest in an Indian flavored pizza using the pickle.”

The benefit of offering new items, even if they aren’t big sellers, is driving traffic and press,” says NRN and RH’s Thorn. “Someone may come in store because of the advertised LTO. Even if they ultimately order their traditional favorite, it still got them in the door and the chain’s name in the news.”

Finally, consumers today have a greater access to inspirational dining moments locally and through social media, says Datassential’s Rodriguez. “This has created a perfect space for growth in adventuresome eating, the continued growth of plant-based diets and flexitarian lifestyles. These lend themselves to being a driver to push consumers toward the growth in fruits and vegetables on top of pizza.”