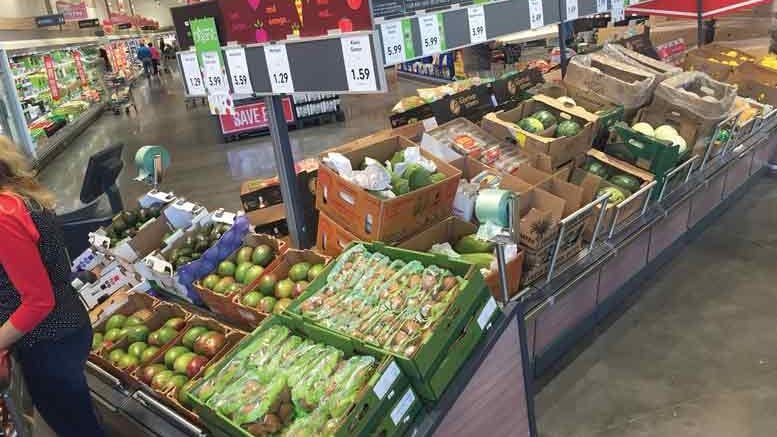 Vibrant fruits and vegetables draw customers in the door at Goose Creek location.

Recently, the Lowcountry of South Carolina welcomed its first Lidl store location, a boon for shoppers in Goose Creek, a small city of around 42,000 residents in Berkeley County, about 30 minutes outside of the bustling metropolis of Charleston. 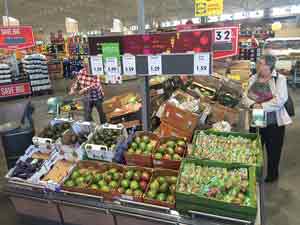 Lidl is sure to provide even more competition in a market that’s already home to more than a dozen grocery store chains. Charleston’s growth, with a population of nearly 400,000 in Charleston County, has made it an appealing location for grocers.

Lidl has stiff competition, but the store, which opened in November, is likely to be a shopping destination with its wide variety of produce offerings at below-market prices, notes William Harwood, director of communications for Lidl in Washington D.C.

“A recent study from the Hartman Group, for example, observed Lidl’s organic produce and products are 39 percent less expensive than other retailers,” says Harwood.
As you enter the store, you’ll notice the high ceilings, bright colors, and a carefully worded sign painted on the wall. It reads: “Carefully curated for you. Full of surprises. Priced to live better.”

The store at Goose Creek is just under 36,000 square feet, which fits in Lidl’s window of average-size stores in the United States (between 30,000 and 36,000). By comparison, the average size of a Kroger store is 77,000 square feet. This more accessible model may be why the store has seen so much success in recent years, expanding from its European roots to the United States.

“Lidl announced our expansion into the United States in June of 2015 and opened our first stores about two years later, in June 2017,” says Harwood. “On Thursday, we will open our 50th store in Ashburn, VA. Our U.S. stores and our assortment are tailored to serve our customers here. However, Lidl has a deep presence across Europe, where we have been operating since 1973. (Lidl’s first store opened in Germany that year.)”

The chain has been quietly expanding its presence. Six years after opening, it already had 30 stores. In the 1980s, the chain opened 300 stores in Germany before expanding to France and the United Kingdom. Today, the chain boasts 10,000 stores across Europe.

In the store, “fresh specialists” check the produce hourly, sorting out anything that’s not fresh and high quality. 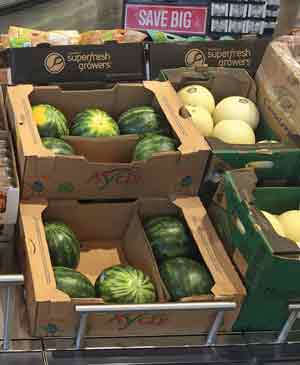 According to Harwood, a thriving produce department is an important aspect of the store’s business model. “Here in the United States, fresh produce plays a very important role in our stores. In fact, it is one of the first things customers experience when they walk in. We offer a wide variety of conventional and organic options and are committed to sourcing only the freshest, high quality produce, including from local suppliers whenever possible,” he says.

“We work hard to ensure maximum freshness across our entire supply chain, including in store, where we train ‘fresh specialists’ to monitor our produce to ensure it meets our high quality standards throughout the day.”

The importance of produce is apparent in the Goose Creek location. Though retailers would not comment on its exact size, the produce department is the first thing you see once you enter the store. You’re at first welcomed by an array of tropical fruits including avocados, mangos, kiwi, and papaya all paired enticingly next to Medjool dates and flavored dates in coconut and almond varieties. Choose from mini watermelons and honeydew melons. There’s a mix of vibrantly colored packaged produce, including mini sweet peppers, bell peppers, jalapeño peppers, and asparagus as well as bulk produce, including green peppers and zucchini.

Shoppers dig through boxes of Navel oranges, Blood oranges, Mandarins, and grapefruits placed alongside Asian pears and plums. The landscape of oranges entices customers to try something they might not normally buy. Bulk packages of garlic, as well as ginger and heirloom fingerling potatoes, fill in a side panel of a display case loaded with packaged onions.

Signage brings attention to featured growers that read: “we are committed to sourcing our fresh fruits and vegetables from suppliers located as close as possible to our stores.” Organic fruit and vegetable signage is easy to discern with huge labels framing the prices. Additionally, the store employs “Quality Assurance Specialists” at each regional distribution center to check produce before it’s marked for delivery, according to the website. In the store, “fresh specialists” check the produce hourly, sorting out anything that’s not fresh and high quality. 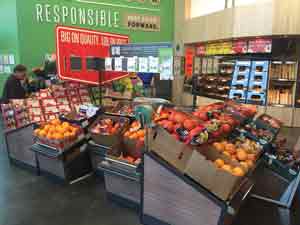 Shoppers are drawn to Lidl’s low prices, according to Harwood, and produce is no exception. “Our produce section is also an example of our commitment to offering the highest quality products at the lowest possible prices. On top of our sharp everyday pricing, we also will run a variety of exciting promotions that gives customers an opportunity for even greater savings. A good example would be our ‘25 percent off all organic produce’ deal, which starts on Thursday and runs one week.”

In the Goose Creek location, bright orange colored signage mark sales on items such as papayas, zucchini and mixed bell peppers. It’s easy to know immediately the price of every item in the produce section, thanks to clear signage throughout the store.

This new European store model, similar to Aldi, seems to be gaining traction in the United States where the chain continues to open stores. It plans to open 60 more in the coming years. The produce section, with its minimalist feel, displays many products packaged in the original cardboard boxes. This seems to appeal to consumers seeking fresh, vibrant produce at low prices.