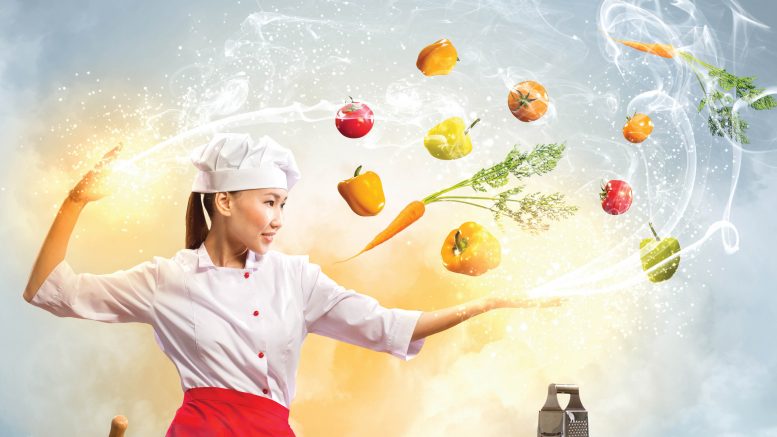 BLURRING THE LINES BETWEEN RETAIL AND FOODSERVICE

Produce-centric, cravable offerings trending at a supermarket near you.

Many consumers still remember when produce in the supermarket prepared foods department was limited to commodity-style potato salad and coleslaw or a slice of lettuce and tomato on sandwiches. But, oh how things have changed.

This meager fresh fruit and vegetable representation went out of style ‘light years ago’ at Heinen’s Grocery Store, a 23-unit chain headquartered in Warrensville Heights, OH, according to Carin Solganik, director of innovation and meal solutions.

Today, fresh produce is ubiquitous throughout the retailer’s prepared foods department. Examples include salads such as Black Bean, Corn and Edamame; sides such as Broccolini with Fried Garlic; and sandwiches such as Grilled Veggie & Goat Cheese Flatbreads. This increasingly familiar scenario represents a blurring of the lines between traditional foodservice and trending culinary operations at retail. It’s also a not-to-be-missed burgeoning opportunity for fresh fruits and vegetables in-store beyond the produce department.

“I think one of the most critical trends in foodservice right now is the democratization of where great food can come from,” says Maeve Webster, president of Menu Matters, an Arlington, VT-based independent foodservice consultancy. “While fine dining will always set the standard, consumers are now comfortable with the idea that great food can come from a wide variety of venues, including food trucks, pop-up shops, college dining, convenience stores and supermarket retail.”

However, Webster adds, in the vast majority of cases, trends that have real staying power start in foodservice and work their way into retail. This is true of most ingredients (chipotle, kale, quinoa, etc.) as well as cuisines (Korean, Mediterranean, Nordic) and preparation techniques (tagine, etc.).

“When a trend starts in foodservice, it has time to percolate with consumers and slowly gain relevance and awareness. As a trend moves through foodservice, operators play with iterations and ways in which to offer these options in a way that’s approachable. This work then lays the groundwork for retail products,” notes Webster.

MENU ITEMS THAT MADE THE JUMP

There’s been a tremendous influx in retail of chefs from fine-dining and fast-casual restaurant arenas over the past decade, and especially so in the past three to four years, according to Steven Petusevsky, president of Steven Petusevsky Enterprises, in Fort Lauderdale, FL, who created the foundational recipes for Whole Foods Market and more recently lent his produce-centric chef expertise to retail foodservice operations at Mariano’s, a 44-unit banner of Milwaukee-based Roundy’s Supermarkets, and Foodland, a 32-store chain based in Honolulu. “This migration has raised the bar on food in supermarkets to a whole new level of elevation.”

There are several good examples of dishes that were crafted by foodservice chefs that have transitioned from restaurants to retail.

Bowls. Restaurant chefs are fighting to ‘out bowl’ each other. Now, bowl food, or a delicious combination of ingredients served in an easy-to-eat-from bowl, has come to retail. This includes ready-to-eat bowls sold in the produce department and made-to-order bowls in prepared foods. For example, Heinen’s Global Grill at its downtown Cleveland location offers customized bowls. These include a base of cooked rice topped with red meat, poultry or vegetables, along with tailored toppings, sauces or dressings. At Foodland’s flagship store in Honolulu, customers can make their own Poke Bowl from a choice of 15 different poke selections, many of which abound with produce.

Salads: Classic salads such as Caesar, Waldorf, Chef and avocado-topped Cobb originated in restaurants, notes Jan DeLyser, vice president of marketing for the Irvine, CA-based California Avocado Commission. These are frequently found today in grab-and-go cases, behind the glass of deli service counters and on salad bars.

Many of the dishes that emanated from foodservice to retail are globally influenced foods, according to Jackie Rodriguez, senior project manager for Datassential, a food industry market research firm, in Chicago. “Tabbouleh used to be limited to the menus of Middle-Eastern restaurants but is now a familiar offering in many delis and on salad bars, as are Italian-style Caprese salads,” observes Rodriguez.

Sides. The Brussels sprouts craze — roasted, charred, slaws and sliced, started among restaurant chefs, according to Chef Neil Doherty, senior director of culinary development for the Houston-headquartered Sysco Corporation. Kale, too, is a dish made popular in foodservice, which is now an everyday item in many prepared food departments.

The Mann Packing Company first introduced its Caulilini Sweet Stem Cauliflower to its foodservice customers before retail, says Loree Dowse, director of marketing for the Salinas, CA-based operation, a division of Del Monte Fresh Produce. “We find chefs are much more open to new and unique items. Once these items establish themselves on restaurant menus, new varieties become familiar to consumers, and they start asking us where to find them. With the Caulilini brand, for example, we receive requests all the time on social media and through our website about where it can be purchased. We now have it in the prepared foods section at a nationwide retailer and are working on a retail pack. This approach has worked really well for us.”

Pizza. Upscale deli pizza toppings such as  arugula and other select produce items are a trend that started in foodservice but now has found its way to retail.

“Better-for-you grain salads, fruit smoothies and produce-topped pizzas are something we are working on,” says Mike Garcia, a Culinary Institute of America graduate and currently vice president of foodservice and culinary at Kum & Go, a 400-unit convenience store chain headquartered in Des Moines, IA.

Tacos. Street tacos, popularized by Mexican-cuisine QSR chains and food trucks, are on the made-to-order menu in a third of the locations at Maverik Country Stores, a more than 300-unit convenience store chain based in Salt Lake City. Freshly made pico de gallo, as well as guacamole and cabbage, are key produce ingredients, says Kyle Lore, the corporate executive chef, who prior to this, served in the same position at Harmons, a 19-store retailer headquartered in West Valley City, UT, where he oversaw the deli-to-bistro prepared foods transformation. “We were able to work with our produce supplier to get a riper Roma tomato, a hothouse variety, rather than the historically used gas green tomato. It makes a big difference in taste.”

WHAT IT TAKES TO TRANSLATE

Not surprisingly, dining out is one of the best sources of inspiration for retail chefs. Culinary magazines, conferences, trends data and social media, especially blogs, Pinterest and Instagram, are useful too, say chefs. However, what works in a traditional restaurant doesn’t necessarily translate accordingly in-store. Smart and strategic concept translation requires careful consideration and planning.

“In restaurants, it’s all about looking at the menu and reading a description,” says Kum & Go’s Garcia. “Retail is very visual. You want customers to walk by the case, see a beautiful plate of roasted vegetables that pop in color and instantly say, ‘I’ll take a half pound.’ Plus, in restaurants, foods are made to order. At retail, something you make in the morning might sit out for two to four hours. There’s both an art and science of cooking for retail.”

The gold standard of a dish that he wants to recreate at retail is what Keoni Chang, a Culinary Institute of America graduate, corporate chef and director of the Sullivan Family Kitchen at Foodland, says he starts with.

“We first look at the environment in which the dish will live. For example, delicate greens don’t do well on the cold bar where the airflow can cause drying and wilting. We also might choose a lighter dressing on some vegetables. Olive oil, for example, solidifies when chilled. To hold up better on the hot bar, we might cut Brussels sprouts more thickly,” says Chang.

To that end, some vegetables can change into an unappetizing color over time as well as change texture and become mushy.

“Green vegetables are especially unforgiving,” says Ron DeSantis, founder and president of CulinaryNXT, in Branford, CT, a CIA graduate and certified master chef, whose resume includes overseeing everything from restaurants and cafes to convenience store fare as director of culinary excellence for Yale University, in New Haven, CT. “Steamed broccoli, for example, can discolor to an olive drab. In the cold space, citrus- or vinaigrette-based dressings will degrade chlorophyll, found in green vegetables.”

One of the best solutions to unwanted color and texture changes is to cook small batches and replenish the hot or cold bar often. This lends itself to merchandising too, DeSantis is quick to point out. “Just have staff say, ‘fresh food coming through,’ on the way to replenish,” he says.

“Because dining-out habits are changing (the split between at-home and away-from-home food purchases is 51 percent versus 49 percent, respectively, according to Datassential), more shoppers expect innovative, interesting, chef-inspired preparations,” says Marshall. “This will surely increase the amount and variety of produce that is included in prepared foods at retail.”         pb

(Story originally printed in the April 2019 issue of Produce Business.)