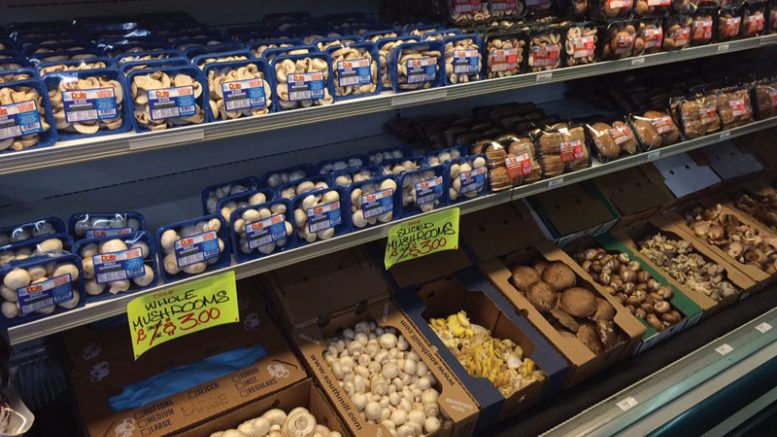 With more varieties moving into the mainstream, home cooks developed a greater interest in mushrooms. Creative restaurant chefs and affordable year-long availability are driving strong mushroom sales in produce departments across the U.S. In fact, total U.S. dollar sales of this flavorful fungi grew 6.3 percent during the 52-weeks ending May 15, 2016 (or 1.4 points ahead of the total produce growth trend) according to information supplied by the Mushroom Council headquartered in San Jose, CA. The best way to keep sales “mushrooming” is to address common challenges and take advantage of opportunities. 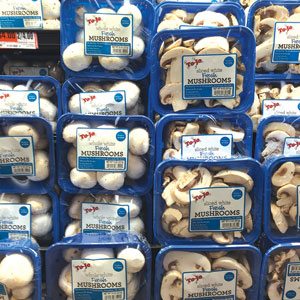 Shoppers enjoy a large selection of mushrooms at Martin’s Super Markets, a 22-store chain based in South Bend, IN. “We have a full line, everything from whites to Portobello and Oysters,” says Ed Osowski, director of the produce and floral departments. “The most popular are sliced whites, and we’ll cross-merchandise these with steaks. Brown mushrooms, such as Portobellos and Creminis, gained so much in popularity that they aren’t considered specialty items anymore.”

Challenge: Ensuring the right assortment of mushrooms can be a difficult task.

“I have many examples of chain stores with good intentions of expanding the variety of mushrooms they offer to their customers,” says Joe Salvo, president of Ponderosa Mushrooms & Specialty Foods, in Port Coquitlam, BC. “Invariably, it fails at the store level, where over pricing, poor rotation of stock and subsequent poor turnover and high shrink squashes any continued support and eventually leads to a scaling back of the program.”

Opportunity: White mushrooms continue to be the basis of selection as the most popular variety. In fact, white mushrooms contributed more than half, or 58.7 percent, of category dollars during the 52-weeks ending May 28, 2016, according to data provided by the Chicago-headquartered Nielsen Perishables Group. Brown mushrooms come in second
at 34.6 percent, specialty varieties at 2.5
percent, combo blends at 1.3 percent and dried at 0.5 percent.

“Following the recommended space allocation based on sales can translate into increased dollars and volume,” says Bill Litvin, senior vice president of sales and national account manager at Giorgio Fresh in Temple, PA. “We work with customers on planograms to determine the optimal number of facings for each of our mushroom varieties in a retail display.”

However, there is no one-size-fits-all when it comes to assortment. What determines this is a retailer’s regionality, shopper demographics and overall demand trends.

“You can’t just take an assortment profile that works on the East Coast and duplicate it for a West Coast retailer,” says Brian Kiniry, president and chief operating officer for the Oakshire Mushroom Farm in Kennett Square, PA, which operates under the Dole label. “It’s important to understand the market and measure performance velocity of each SKU in order to determine the optimal mix.”

Focusing on the specific tastes of ethnic groups in a community can be effective as well, according to Ponderosa’s Salvo. “Generally speaking, Asians and Europeans are much more accustomed to having fresh mushrooms in their daily diet.”

Kevin Donovan, national sales manager for Phillips Mushroom Farm in Kennett Square, PA, agrees. “If you have European clientele, you’ll want to offer wild mushrooms, such as Morels and Chanterelles.”

Shoppers are looking for bolder flavors. “We’re seeing a trend in the flavor scale of mushrooms,” says Kevin Delaney, vice president of sales and marketing for To-Jo Mushrooms in Avondale, PA. “First, there was a dominance of mild-flavored white mushrooms. Then meatier brown mushrooms began to grow in popularity. Now, we’re seeing consumers gravitating toward the next level of flavor and varieties that have moved into the mainstream, such as Shiitake, Enoki and Oyster mushrooms, both whole and sliced.”

“Beyond this,” says Giorgio’s Litvin, “organic and value-added mushrooms are the biggest growth categories for us.”

Challenge: “It’s always a challenge to get more refrigerated shelf space for our mushrooms,” says Ponderosa’s Salvo. “But as a rule, the larger the display, the bigger the sales.”

Opportunity: Space allocation depends on a number of factors, such as the size of the store, according to Jane Rhyno, director of sales and marketing for Highline Mushrooms in Leamington, Ontario, Canada. “However, in general, a minimum of 4 to 6 feet should be dedicated to mushrooms. We have seen many of our customers moving to 8- and 12-foot mushrooms sections with a full offering of both conventional and organic mushrooms.”

Challenge: “Some stores experience very high levels of shrink. One reason is over-pricing to cover historical shrink and to help cover the anticipated shrink of product removed from the shelf. These high-priced products, combined with older product being held longer than should be, reduce sales and customer satisfaction is minimized; thereby reducing future sales even further. It’s a vicious cycle,” says Ponderosa’s Salvo.

Opportunity: It is extremely important for retailers to display mushrooms at the proper temperature and to remove any expired products in order to help maintain mushroom sales, according to Giorgio’s Litvin. “Ensuring the product looks its best will help maintain positive sales figures.”

Martin’s Super Markets keeps shrink to a minimum with closed glass door cases that maintain the correct temperature for mushrooms, according to Osowski.

“Shrink on bulk mushrooms tends to be significantly higher than packaged and can range from 25 to 45 percent with whites and Creminis. It can be significantly higher on slower-moving specialty items. Packaging helps keep mushrooms from getting damaged and drying out. Keep an eye on the proportion of bulk versus packaged so that overall category shrink does not get too high,” recommends Highline’s Rhyno.

Even when the cold chain is maintained, it’s important to keep inventory to a minimum at the distribution center and in the store.

“Great produce departments order based on their scan data and keep mushrooms as fresh as possible by turning displays often,” says Mike O’Brien, vice president of sales and marketing for Monterey Mushrooms based in Watsonville, CA.

One innovative idea to reduce shrink is to use mushrooms about to be culled in other areas of the store.

“Those stores with in-house delis and HMR kitchens and preparation areas could utilize these mushrooms in many different food items to sell to their existing customers, whether it be soups, pizzas, sandwiches and sauces or marinated and grilled. This, in turn, could give customers a better idea of how to utilize mushrooms in their own home cooking and ultimately boost sales of the fresh mushrooms,” says O’Brien.

Challenge: These days, most retailers resist having outside companies’ point-of-sale materials in their stores,” says Ponderosa’s Salvo. “Yet, they do very little themselves to help promote 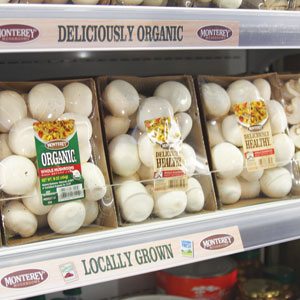 and educate the consumer. This is a point that we all need to pay more attention to.”

Opportunity: Education is important for retail staff and shoppers. “We can provide sales materials to help educate new associates,” says Giorgio’s Litvin. “Knowing about the health benefits of mushrooms and being familiar with their versatility (the Mushroom Council’s ‘blendability’ concept) helps stores stand out from the competition. Consumers want solutions, ideas and knowledgeable sales associates.”

Shoppers at Martin’s Super Markets are provided with recipe sheets when, for example, mushrooms and ground beef are both featured together in an ad. Mushrooms are so versatile that they can easily be incorporated into nearly every cuisine.

“There is an incredible opportunity to sell more mushrooms by sharing the nutritional benefits and providing easy ways to incorporate mushrooms into a healthy meal. Retailers used fliers to help educate and inspireiconsumers, but now their digital presence is a great and effective way to reach consumers. Many retailers not only have great websites, but they also have their own apps. These apps include recipes and nutritional information that’s available right at the shopper’s fingertips,” says Highline’s Rhyno.

Demos are another great educational tool. “We recently tested sample mushroom salsa at the produce department entrance of a nearby retailer. The recipe choice was meant to demonstrate the versatility of fresh mushrooms,” says Justin Reyes, sales and marketing manager for Gourmet Mushrooms in Sebastopol, CA.

Challenge: Retailers often fall into a rut of predictablemushroom promotions.

Opportunity: “Instead, we believe it is important to offer a variety of promotional opportunities,” says Giorgio’s Litvin.

“We change up the types in our ads. For example, it’s white mushrooms for stuffing and Portobello for grilling in the summer. In the fall, the varieties change. For example, the Creminis will be advertised for soups and stews,” says Osowski.

Promotional strategy depends entirely on sales goals, according to Highline’s Rhyno. “If you want to move tonnage, then lower the price on white whole mushrooms. If you want customers to try brown mushrooms, then put white and brown on sale together and offer two for the price of one. If the goal is to appeal to the convenience or varietals mushroom shopper, then advertise products like a sliced medley as a reminder rather than at a deep discount.”