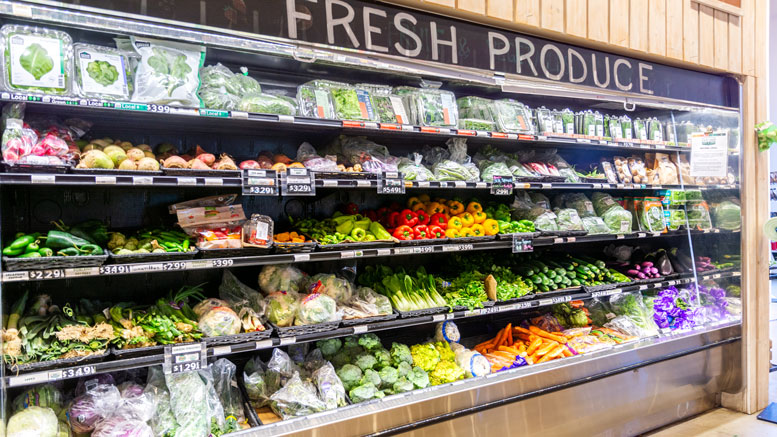 At 3,500 square feet, this store strives to serve “the best of the Midwest.”

A food hub is an apt way to describe Local Foods. The company, located in the trendy and affluent Bucktown neighborhood on Chicago’s northwest side, was founded in 2012 as a wholesale distributor aimed at connecting Midwestern meat and produce farmers to city chefs. Two years later, founders, who included Dave Rand, today the chief executive officer, carved out a 3,500-square-foot public market from its nearly 30,000 square-foot wholesale distribution center.

Today, Local Foods encompasses a variety of businesses. There’s “The Market,” akin to a supermarket, but with a concentration on local; Butcher & Larder butcher shop; and the Local Foods Kitchen café.

In addition, there’s HandCut Foods, which supplies scratch-prepared foods for larger institutions like schools from its 5,000-square-foot commissary kitchen on the same premises, and MightyVine, a 30-acre hydroponic greenhouse tomato and cucumber operation located 80 miles to the west in Rochelle, IL.

It’s in the heart of The Market, specifically in the produce department, that the Midwest’s bounty of fresh fruits and vegetables is on full display.

“Produce is a headliner in our retail store. This is especially true this time of year, with many customers specifically coming in to see and buy what’s in season,” says Rand. “It’s a big part of what we do, with fresh produce representing a quarter to a third of store sales.”

Rand is a self-proclaimed foodie who, in past careers, has fished commercially for salmon in Alaska, grown organic grain in Washington state, run his own grass-fed cattle operation in Illinois, and managed farmers markets in the Chicago area.

Locally sourced for Local Foods is defined as products grown, raised, or created within 350 miles of Chicago, a distance that puts these foods in truck’s reach within a single day. The company operates five trucks that pick up from farmers and deliver to the market six days a week.

This 350-mile radius includes a seven-state region that borders Illinois. Rand says The Market sources apples and stone fruit such as peaches, cherries and nectarines from orchards in southwest Michigan; eggs from Iowa; and vegetables like cauliflower, broccoli, peppers and cucumbers from Illinois and Indiana. Southwest Wisconsin has a high density of organic farms, which supply The Market’s organic vegetables.

“Organic is bigger in our retail market than for foodservice customers we serve through our wholesale operation,” says Rand. “At foodservice, unlike retail, operators aren’t assured of getting the premium they need for organic.”

The first seasonal produce sold at Local Food’s market starts in the spring with wild, foraged items like ramps and mushrooms. Asparagus follows in mid-May, followed by strawberries, radishes and lettuce greens, then berries and stone fruit. Sweet corn starts in August and fall vegetable crops arrive until November. After that, says Rand, the retailer relies on local storage crops like potatoes, onions, carrots and rutabaga to get through the off-season.

In the winter, Local Foods expands its reach to source fresh fruits and vegetables from small family farms in Florida, Texas and California to maintain an average of 150 fresh produce SKUs on the shelf.

“We have unique produce setup that is the anthesis to the big stores,” explains Rand. “There’s less packaged product, we’ll repack ourselves and the product comes straight from the farmers.

“We try to have specialized things, maybe an heirloom variety of a fruit or vegetable a farm has cultivated. As a result, we won’t always have, for example, red, orange and green peppers all neatly stacked next to each other. Or yellow and zucchini squash both at the same time. Or three types of greenhouse cucumbers. The selection changes frequently due to seasonality,” says Rand.

LOOKING TOWARD THE FUTURE

The Market was one of the first grocers in Chicago to shut its doors to in-person shopping due to COVID. The retailer converted to a contactless, online-only business with curbside pickup and delivery via Mercato from April to October 2020.

“Online produce shopping is hard. If I pick a head of kale and the customer’s not happy with the selection, it’s not their mistake as if they chose it themselves, it’s my mistake and we can lose credibility with them,” says Rand. “Also, it’s costly. I have to pay someone to shop for orders, but the cost of the produce is the same and my margin is the same.

“Still, we had to keep our team protected and, since retail was booming, to do what we could to keep orders coming in and our customers happy.”

Rand and his team are looking forward to getting back to in-store events.

“We like to give ideas and have a significant social media presence for education. Pre-COVID and hopefully in the future, we can have vendor and farmer demos again. In addition, since we sell to chefs, we have also had chefs come in-store and share their creativity,” says Rand.

In the next nine to 12 months, the retailer is looking forward to opening its second location.

“Our customers are those looking for something they won’t find in a box store. They’re not millennials; it’s not an age thing. Our customers are a little bit of everybody from farm market diehards who want to shop on a day when no markets are open to foodies and Bon Appetit readers. Those are the customers we cater to,” says Rand.