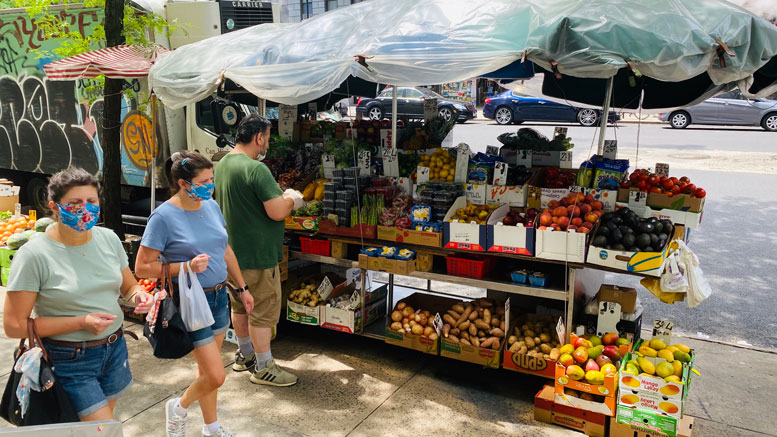 As masks get removed, the industry stands at the precipice of change, with restaurants re-opening, retailers adjusting to new shopping patterns, and produce itself being transformed.

The COVID-19 pandemic and related disruptions didn’t upend the New York market as much as reshape it, with the outcome being a new chapter for the city’s retailers, foodservice operators and wholesalers who will continue to adjust as restrictions regarding movement and gathering unwind.

The coronavirus crisis accelerated some of the trends that were already beginning, such as the migration of Millennials to the suburbs, as reported by Dover, PA-based AIMsights and other research organizations. So, even as many restaurants welcome back indoor dining, a large number of eateries are gone for good, with neighborhoods that were the latest overtaken by now-departed young people among those most affected. On the flip side, foodservice in the suburbs, not subject to the kind of restrictions seen in New York City, has been able to weather the less-drastic health orders and are poised for gains, with new eateries already popping up.

Likewise, retailers are likely to see gains among those stores serving the suburbs, while those in more urban New York metro communities, particularly those focused on younger consumers, may have a longer road back and need to make fundamental changes to how they do business in order to thrive.

For the produce industry itself, changes wrought in the pandemic, such as the increase in wholesaler/distributor deliveries to customers who hadn’t used the market and may be a new customer base, are likely to have long-term effects. Although it’s impossible to tell how things will balance out, many changes will remain, for example, the more frequent packaging of fresh produce. Items, such as bagged apples, became more popular among consumers who did not want to see their produce handled by other shoppers during the pandemic, and who prefer the idea of being able to grab and go rather than browsing at close quarters alongside other consumers.

Behaviors adopted in the pandemic may not shift back to pre-coronavirus norms. In the case of packaged produce, the change may remain not only because of the preferences of in-store shoppers, but because pre-packaged fresh produce, particularly if it is uniform in composition, may appeal to that recently expanded cadre of consumers who are using curbside pickup and delivery. In those cases, produce is selected by a stranger who applies standards, not the end users. Shopping online and using a service to provide groceries would seem to favor packaged product provided at a determined standard.

Bottom line, however, is the produce industry demonstrated resilience in the crisis, and consumers evinced a greater interest in healthy eating, looking to fruits and vegetables to put their interest into action.

Of course, a major question hanging over the future of New York’s produce market is how permanent are the changes wrought by the pandemic. Restaurants are reopening, but many consumers became more adept as cooks in the pandemic and may not necessarily turn to foodservice for favorite dishes they’ve since learned to prepare themselves. Millennials were considered a generation that would never learn to cook, according to some observers who characterized them as “the takeout generation.” During the pandemic, Millennials had to become food-prep adept and did so with the aid of their ally, the internet.

Still, as most folks have learned, predicting how events will turn out in an environment still heavily influenced by the COVID-19 pandemic is a fool’s game, at least outside of a timeframe of longer than the next few weeks.

As this spring season proceeded, Gabriela D’Arrigo, vice president of marketing and communications, D’Arrigo, Bronx, NY, says her experience was that of a city becoming reenergized. But she is among those who feel it’s best not to get too far ahead of events still unfolding, adding that wholesalers, by nature, are prepared to deal with change.

“I live in the city, and I’ve been more up and about and a switch has been flipped,” she says. “It’s gone from ‘off’ to ‘on’ with the change in weather. This always has a positive effect on people. People have COVID fatigue and are over it. They want to be outside.”

Indeed, the entire region was markedly busier by mid-May, she says.

“I was out in the city this past weekend,” D’Arrigo notes, “It was packed. Places where I was able to walk in without reservations to get dinner or brunch not long ago, there was just no way that was going to happen now.”

With the warmer weather, vaccines, fewer restrictions on gathering and the aforementioned COVID fatigue all pushing them to get out of their homes, people across the New York region have stirred a rebound in the foodservice trade. On the retail side, many adjustments are still taking place, as shoppers settle in to their new working environment and suburbs see a new group of ex-city-dwellers now either shopping in-store or continuing their experiment of on-line/delivery of grocery items, including produce.