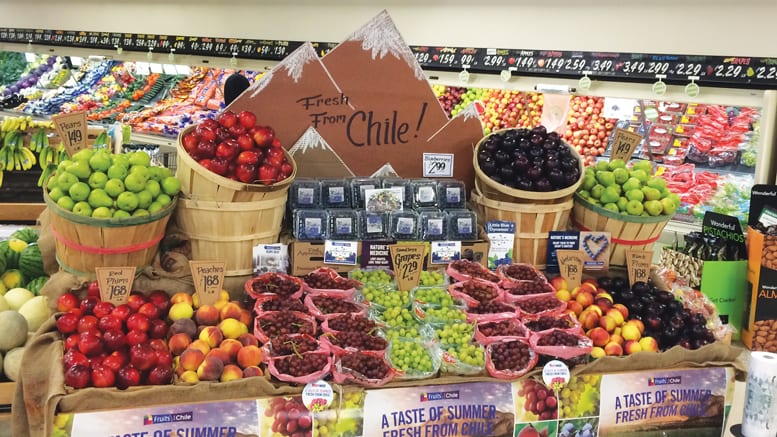 “Chile exported [more than 2.7 million] tons of fresh fruit in the 2017–2018 season, a 6.2 percent increase over the 2016-2017 campaign,” says Karen Brux, managing director. “With new markets taking much of this increase, volumes shipped to North America have been stable.”

The retail advantage of the Chilean deal, says John Pandol, director of special projects for Pandol Bros. in Delano, CA, is its counter-seasonal nature. “U.S. consumers need fresh fruit when it’s snowing in half the country,” he says.

The Chilean season runs December through April, cycling through many preferred items, explains Karin Gardner, director of corporate communications for Oppy in Vancouver, BC. “This gives consumers a wide range of fresh crop items through the winter and early spring.”

Chilean grapes, stone fruit and apples play an important role in sales and profit, according to Keith Cox, produce category manager at K-VA-T Food Stores in Abingdon, VA, with 130 stores. “Don’t be afraid to promote Chilean fruit in ads and display product, just as you would in the summer months.”

Dionysios Christou, vice president of marketing for Del Monte Fresh Produce in Coral Gables, FL, points out since today’s consumers are increasingly looking for fresh and healthy options, it is important for retailers to promote high-quality products year-round. “Retailers who promote these nutritious, healthy and flavorful fruits with displays that standout will continue to sell at high frequency levels in the stores all season long,” he says. 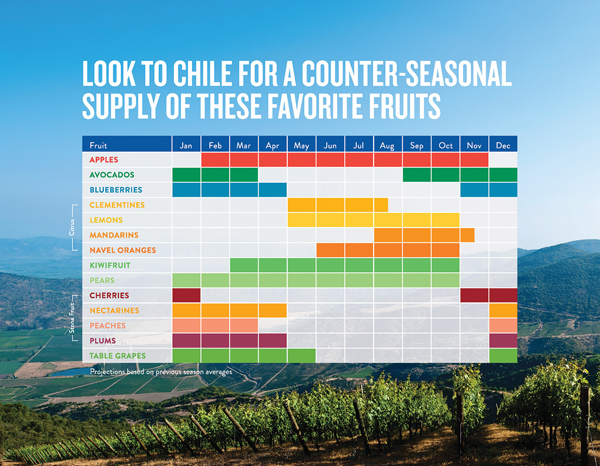 The main fruits supplied by Chile during the U.S. winter months, according to the CFFA, include cherries, blueberries, grapes, peaches, plums and nectarines. “Chile is essentially the main source of everyone’s favorite summer fruits during the winter months,” says Brux. “We use the tagline A Taste of Summer. Fresh from Chile on our POS to showcase the entire Chilean offering.”

Of the counter-seasonal fruit, Pandol observes grapes are the top mover, followed by blueberries and then an assortment of other fruits, including peaches, plums, nectarines, kiwis, apples, pears and pomegranates.

Brux offers these numbers that point to growth in specific products for a better understanding of Chile’s fruit export picture:

The United States by far is the largest market for fresh blueberries. In 2013-14, Chile shipped 51,396 tons of fresh blueberries to North America and reached 70,919 tons in 2017-18, a growth of nearly 40 percent and 64-percent total market share of all Chilean fresh blueberry exports.

During the 2017-18 season, 12 percent of the total Chilean blueberry volume shipped to North America was organic.

Peach exports to North America increased by 9 percent between 2014-15 and 2017-18, bolstered by air shipments and retailers promoting the Flown in Fresh message to their customers.

In addition to stone fruit, Chile is moving into additional items. “Chile now offers an excellent assortment of citrus, increasing volumes of cherries and is emerging as a promising source of berries, especially with new blueberry varieties taking root,” says Oppy’s Gardner. “New types of proprietary grapes are being met with enthusiasm at U.S. retail.”

Naturipe, headquartered in Naples, FL, offers programs to retail and foodservice partners highlighting its blueberries and avocados from Chile. “The excellent quality of Chilean agriculture from our Naturipe growers of blueberries and avocados makes for great promotions and increased consumption,” says Francisco Del Rio, chief executive of Naturipe Avocado Farms in Salinas, CA. 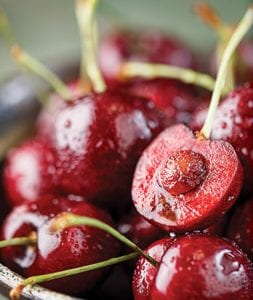 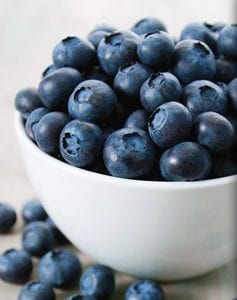 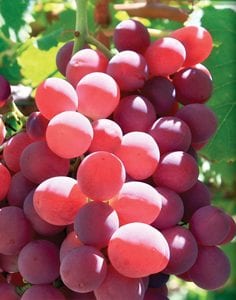 Continued development keeps Chile innovative. “We are seeing exciting increases in citrus, berries and cherries,” says Gardner. “New grape varieties that are sweeter, crunchier, look beautiful and have longer shelf life are beginning to draw awareness and, in fact, are earning their own unique PLUs.”

Giumarra’s Soberanes reports increased production of new, proprietary grape varieties out of Chile as they continue to gain steam with commercial viability. “In general, volumes of traditional grape varieties are declining out of Chile,” he says. “Some of the new varieties we are offering in partnership with our growers include Arra 19 (Passion Glow), Arra 15 (Sweeties), and Arra 29 (Passion Fire).”

Steve Monson, export grapes commodity manager for Robinson Fresh in Eden Prairie, MN, says a dramatic difference this year from Chile will be the number of new varietals. “The increase in varieties is across all colors but is mainly associated with Red Seedless and Green Seedless varieties,” he says. “Some of the new varieties available include Magenta, Timco, Allison, Arra 29, Krissy, Jack Salute and Timpson.”

Pandol also cautions against grape buyers deciding they like a particular variety based on experience in California. “In Chile, certain varieties will vary, and others do better or worse. Buyers need to assess each different variety in each different production area and even each different year – just like we do with wine.”

Chilean cherries are another product to keep an eye on. “There is an inkling that at some point, Chilean cherries will become much more prevalent in the U.S. market,” says Pandol. “Right now, most of Chile’s cherry volume ships to Asia. Those markets are big, but they’re not unlimited. We expect to see increasing cherry volume to the United States.”

Brux confirms the vast majority of Chile’s cherry crop is currently sold in China. “But with production continuing to increase, exporters are recognizing the need to develop other markets, and the United States is a natural choice,” she says. “There’s definitely strong retail demand for Chilean cherries, and I think we’ll start to see increased volumes and marketing support.”

The variety from Chile makes for easy and colorful winter displays. “We see everything from produce stacked high and promoted at an appealing price point to thoughtful, beautiful displays that connect consumers with the produce through grower stories displayed on colorful point-of-sale signage,” says Oppy’s Gardner.

Paul Kneeland, executive director of produce, foodservice, floral and bakery operations for Gelson’s Markets in Santa Fe Springs, CA, with 26 stores, recommends keeping products in separate categories but adjacent. “We put cherries and grapes in the same relative area,” he says. “Stone fruit should be together in another area but in close proximity to grapes.”

Del Monte encourages retailers to use secondary displays in the produce department. “Make these front and center as they help drive impulse purchases and play a beneficial role in cross-merchandising,” says Christou.

Rotation and management of shelf life is crucial for Chilean fruit. “Because of the longer supply chain compared to U.S. product, Chilean grapes require stores to be on top of rotation and culling,” says Pandol. “The rotation and culling stores see in the summer months isn’t the same as in winter. It’s the same challenge in blueberries. The fruit has traveled further, so greater attention must be paid to rotation, and culling needs to be higher.”

A key to successful merchandising, according to Gardner, is to draw attention with great-quality produce rotated regularly and presenting an excellent impression of freshness and flavor. “High-graphic bags are favored by many retailers as a means to achieve this,” she says. “We’re also seeing more retailers, especially in Canada, prefer top-seal style packaging, which reduces waste while still making a strong visual impact.”

Retailers are encouraged to communicate with shoppers to promote the freshness and taste of Chilean fruit. “With the varying peaks of flavor and availability, there are always multiple Chilean products to be jointly promoted to generate incremental consumption and grow the respective product categories,” says Naturipe’s Del Rio. “We encourage promotions that capture peak flavor and peak availability to maximize the result for everyone in the supply chain.”

Buyers must ensure top-quality product for best promotion results. “Sell at the peak of freshness and flavor,” says Gelsons’ Kneeland.

CFFA reports its promotion, A Taste of Summer. Fresh from Chile, continues to be popular with both retailers and shoppers. “There’s still a lack of knowledge about what’s available from Chile and when, so there are significant opportunities for us to communicate this,” says Brux.

Brux emphasizes the importance of consumers knowing what they’re buying. “We encourage retailers to inform their shoppers through signage,” she says. “When is the fruit ripe? What does it taste like? There are great opportunities for retailers to promote some of the more unique varieties available, and we can offer support, whether through marketing materials or demos.”

Sample, sample, sample, agrees K-VA-T’s Cox. “This is the best way to help the consumer know there is good summer fruit in the winter,” he says. “Proper signage provided by CFFA, along with recipes and ad logos, also help.”

Monson of Robinson Fresh suggests expanding perception of usage. “Grapes are a great snacking opportunity, but there are so many ways to utilize them beyond snacks,” he says. “A grape bruschetta or a roasted grape pizza are great winter foods to encourage more grape consumption. Recipe cards are another great idea to give consumers ideas for utilizing grapes in new and different ways.”

Monson also notes the importance of having more than one color grape in promotion at a time. “This availability lends itself to people trying all three colors and has proven to be beneficial to increasing sales in the category,” he says.

Retailers find effective marketing and educational support for both staff and shoppers. CFFA offers availability charts for stores to hang in their backrooms. “It’s crucial that retail staff can speak to what’s available from Chile and its seasonality,” says Brux. “Retailers are also interested in understanding where the different fruits grow, so we’ve developed a growing region map.”

CFFA also plans to provide short “direct from the orchard” videos for key fruits to bring the industry to life for retailers and showcase key industry facts. “We’ll be starting with one key category in 2019 and hopefully will continue to expand on this,” says Brux.

The majority of CFFA’s marketing funds are invested at the retail level, working with hundreds of chains across the United States and Canada on custom programs to drive Chilean fruit sales in stores. For consumer marketing, the focus is on social media. “We produce numerous recipe images and tasty-style usage videos we share on both our social media platforms and those of retailers,” says Brux.

CFFA’s merchandisers work with dietitians, social media and marketing contacts at the retail level. “This has resulted in numerous chains, both national and regional, utilizing our resources to communicate with their shoppers,” says Brux. “We also just launched a consumer newsletter we will expand on during our main season this winter.”

One area where CFFA is increasing support is in digital coupons. “More and more retailers are pushing this,” says Brux. “We have seen great success with double-digit redemption on coupons for grapes and blueberries.”

When it comes to ad support, Robinson Fresh works with retailers to make sure ads are reflective of a customized season-long plan. “We work to make sure the times Chile will have available volume lines up with the timing of ad support,” says Monson. “When there is volume available and a logistics supply chain has been established, Chilean product can be very comparable to domestic product from a price and quality standpoint.”