A downtown development boom keeps produce pros on their toes.

While nobody was paying attention, this Midwestern city on a Great Lake transformed itself from luckless underdog to the toast of the nation. Though the residents of Ohio’s second-largest city have long known how livable and loveable this perch is, the rest of the world seems to be discovering it lately.

Recent events, such as LeBron James and the Cleveland Cavaliers bringing home an NBA Championship, and the Republican National Convention rolling into town, brought heightened attention to a city not all that accustomed to it. What those outsiders found when they landed is a sparkling city with a vibrant arts, culture and dining scene that is enjoyed by one of the most diverse and welcoming populaces around.

The Cleveland Orchestra, Rock and Roll Hall of Fame, and Cleveland Museum of Art all reside here, as does one of the most robust tourist and hospitality industries in the region. A veritable hotel boom has doubled the number of downtown hotel rooms in just three years, and Cleveland’s restaurant, bar and brewery scene is exploding right along with it thanks to award-winning chefs and the foodies who adore them.

According to Destination Cleveland (Cuyahoga County’s convention and visitors bureau) while the official number of Cleveland residents hovers in the 400,000 range, the five-county Greater Cleveland metropolis contains more than 2 million, most of whom make frequent visits into town to work, eat and play. What’s more, Cleveland’s urban core is enjoying an unprecedented population growth, seeing a 70-percent increase over the past 15 years. This influx of new residents, many of them Millennials lured by a low cost of living and high quality of life, pushed downtown apartment occupancies to 98 percent.

“It used to be absolutely crazy-busy down here at four in the morning,” says Tony Anselmo, a guy who knows a thing or two about the Northern Ohio Food Terminal. “When I was a kid, my father got his jaw busted over a parking space.”

Anselmo, chief marketing officer and one of four equal partners of Premier ProduceOne, grew up at the terminal market. His father operated a fruit and vegetable stand at the venerable West Side Market, and he worked by his side “since I was a sprout,” he says. The wholesale market on the edge of downtown Cleveland used to supply every grocer, restaurant and foodservice distributor in town with its fresh produce, creating a competition for prime parking spaces of epic proportions.

These days, there appears to be more seagulls than semi-trailers occupying this massive swath of land just east of town. Most of the parking spots and truck bays that caused so many fisticuffs back in the day now sit open and wanting.

“Cleveland used to have all these independent grocery stores — the Stop-n-Shops, Rini’s, Russo’s, Mario Fazio’s — which would all have buyers come down and shop at the terminal because we had to,” recalls Anselmo. “When supermarkets like Giant Eagle came to town, everything changed.”

But it’s not all gloom and doom, he stresses. “The market is not dead, it’s gone on a diet,” says Anselmo. “The strong ones are doing well.”

The Northern Ohio Food Terminal went from a peak of about 15 to 20 different produce commission houses down to roughly six, with wholesalers/distributors such as Sanson, Cavalier-Gulling-Wilson, Global, and Forest City Weingart Produce still staying strong. They continue to survive, and thrive, because they all learned to adapt with the times.

“All of the produce houses down here complement each other. It’s like a shopping mall for produce buyers where you’re able to walk around and look at all the options.”

“When this terminal opened up in 1929, about 20 different lines of trains went right through our backyard from everywhere in the country,” says Andrew Weingart, fourth-generation president of Forest City Weingart Produce Company. These days, though the terminal is leaner, it still provides an unparalleled level of variety, quality, value and service.

“All of the produce houses down here complement each other,” says Weingart. “It’s like a shopping mall for produce buyers where you’re able to walk around and look at all the options. You can find six different honeydews with six different prices, because they’re coming from six different places.”

What’s more, adds Weingart, shopping trends appear to be shifting yet again. The last great upheaval in the wholesale produce market occurred when the large supermarket chains swept into

town. Nowadays, shoppers seem to be pining for the good old days.

“Recently, more mom-and-pop stores are coming back,” Weingart observes. “I think that while the Giant Eagles and the like provide a one-stop shopping experience, these independents are 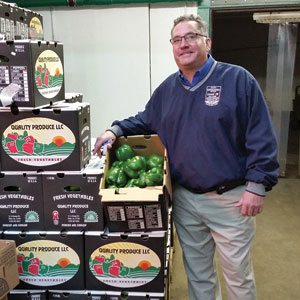 stepping in to fill the void of customer service and personal relationships.”

Though local produce is the catchphrase of the day, Joe Cavalier, president of Cavalier-Gulling-Wilson, often cautions his buyers against simply going with the flow.

“This time of year, many of our smaller customers flock to the Amish auctions, because the price is so good,” he says, referring to the large produce sales that take place throughout Ohio’s Amish communities. “But the No. 1 priority to anybody in the food business should be food safety and traceability. Some of these farms feel like they are 200 years back in time.”

Cavalier, who worked at the terminal his entire life, says independent grocers such as Heinen’s and Miles Farmers Market work with him, because he has the necessary safety certifications in place.

Though it sits just a 100 yards away from the Northern Ohio Food Terminal, produce distributor The Sanson Co. looks nothing like its aged neighbors. The 225,000-square-foot facility is bright, modern and massive, with forklifts zipping through automated doors that open on approach.

This long-running commission house got to this point because it embraced changes early on that allowed it to keep pace with an ever-changing market.

Matthew Fritz, the head of Sanson’s organic division, says his grandfather, Anthony Sanson (who was COO), and his uncle, Jeff Sanson (current chief executive), always reinvested money back into the business. “You always have to be adapting, from hiring the right staff, carrying the right product and investing in technology. It all helped us grow into a regional player,” says Fritz.

While some of Sanson’s competitors are griping about market consolidation, Sanson is benefitting from it. This 190-employee company brings in and sends out 25 to 30 tractor-trailers full of product every day of the week. A full two-thirds of it goes to mega-retailers such as Giant Eagle, Kroger, Wal-Mart, Target and Costco.

In addition to boasting the latest safety and traceability technologies, Sanson was way ahead of the curve with respect to organics, a program launched two decades ago. Today, Sanson is one of the largest buyers and sellers of organic produce east of Chicago.

Premier ProduceOne’s Anselmo and one of his four partners, Anthony Rossi, took a slightly different tack to produce prosperity. Around the same time Cleveland was being invaded by national grocery chains and broadliners such as Sysco and US Foods, a chef-driven restaurant renaissance was beginning to take root.

Notable names like Michael Symon, Karen Small, Paul Minnillo and Doug Katz were opening progressive farm-to-table bistros around town, and they began demanding products not found at the terminal.

In 1998, Anselmo and Rossi launched Premier ProduceOne, a niche produce delivery service that has since grown into a multi-
million-dollar foodservice supplier.

“We deliver to every hotel, college, country club, restaurant and sports venue in town, all the way down to small caterers and customers that sell packaged sandwiches,” says Anselmo, adding that his company is a proud member of Pro*Act. Thanks to facilities in Cleveland, Columbus and Dayton, Premier ProduceOne’s trucks reach every county in the state.

Compared to a typical grocer’s 100 to 300 produce SKUs, or individual items, Premier’s catalog logs around 1,200, precisely the kind of variety that chefs adore. In place of his early-morning food terminal visits, Anselmo now deals directly with farms in California, Florida, New York and everywhere in between.

Entire refrigerated trucks filled with produce from multiple farms travel non-stop to Cleveland, while other products are shipped via air to Cleveland Hopkins Airport.

Anselmo likes to joke that he’s a mortician dealing with products that have been dead since the farmer plucked them days earlier and many miles away from the ground, bush or tree.

“We’re up against the clock,” he says. “The whole finesse of a good produce house is being able to mix quick turnover with longevity and storage.

“We have one guy who does nothing else but manage avocados. It’s an art form, and our customers pay us to do it. I always tell my customers, ‘Save your money on toilet paper or dish soap, not your produce. We’re the flavor. Without us your meat just tastes like meat.’”