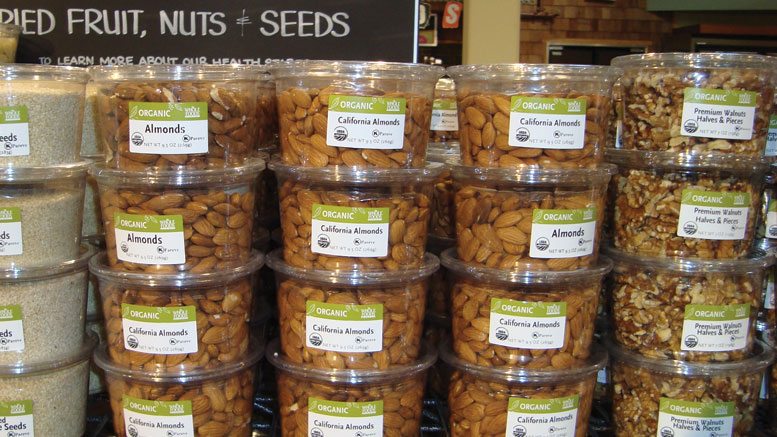 In October, the U.S. Food and Drug Administration (FDA) declared almonds — as well as peanuts, pistachios, hazelnuts, walnuts, pecans and some types of pine nuts — can be labeled “healthy” foods. The change comes as the FDA continues to revisit its dietary guidelines based on the latest food science. Under the new recommendations, the agency is considering not just how much fat is in food, but whether it’s a “healthy” fat (like monounsaturated) as opposed to an unhealthy fat like trans or saturated.

Almonds predominantly contain the so-called “good” fat, as well as plenty of fiber and protein. As a result, they fit safely within the new definition. And people across the country are expected to continue to respond positively.

“Consumer demand for almonds is high,” says Molly Spence, director of North America for the Almond Board of California (CAB), a Modesto, CA-based marketing organization that is also involved in research, quality control and similar activities. “Consumer research shows almonds have been associated with being healthy and nutritious for years. So it’s really important almonds can now be described that way. We believe this change will have a positive impact.”

Produce departments should be prepared to capitalize on the healthy designation as an opportunity to increase sales. There are myriad ways to merchandise almonds, including encouraging consumers to add almonds to produce-centered meals and educating them about how they can be a delicious, convenient snack food.

“Almonds are an item that’s seen pretty substantial growth in sales for us,” says Dennis Baker, director of produce operations for Harp’s Foods, which is headquartered in Springdale, AR, and has 84 stores in that state, Missouri and Oklahoma. “You have to get behind it and stay behind it; if you do you’ll reap the rewards.”

How and When To Sell Almonds

Merchandising nuts as a healthy food is a great way to grab consumers’ attention. “We’ve always tried to highlight the healthy attributes of different things we sell,” says Randy Bohaty, produce director for B&R Stores, which is headquartered in Lincoln, NE, and has 18 stores under the brands Russ’s Market, SuperSaver, Apple Market and Save Best. “Now that almonds can be merchandised as a healthy food, we’ll put that on our signage and promote them as that.”

Consumers are increasingly reaching for nuts when they want something healthy in between meals. “Almonds are the No. 1 nut that consumers associate with snacking; in fact, U.S. consumers surveyed eat almonds an average of more than nine times per month, with nearly half of those occasions specific to snacking,” says Spence. “And, in a recent study, consumers listed apples and almonds as the top two foods they think of as nutritious snacks.”

“Twenty-three almonds is a phenomenal curb to that mid-morning hunger pang,” says Ron Fisher, president and chief executive of Fisher Nut Company, a growing, processing and marketing business located in Modesto, CA. “That will get you through to the next meal. In India, almonds are touted as a mental food. Seven almonds in the morning is a traditional snack before children leave for school.”

As consumers increasingly look to nuts for munching, flavored varieties have become more popular. Pierre Boucha is the director of sales and field marketing for Don Sebastiani and Sons, which has a new product line called U Gottabee Nutz. The Sonoma, CA-based company currently offers rosemary and Meyer lemon almonds, caramel and sea salt cashews, and balsamic habanero pistachios. These products have been so successful that the company plans to add four more flavors.

“Almonds now sell consistently all year,” says Boucha. “They are no longer seasonal nuts.” That being said, there are times when sales are likely to increase. Nut sales generally rise in November and December, when consumers are baking for the holidays. “The Super Bowl and March Madness are very popular times to drive nut sales,” says Boucha.

To ensure the produce department can meet the needs of customers seeking almonds and other nuts, consider carrying a wide variety of types. Almonds come roasted and raw; whole, slivered or sliced; salted and unsalted; and with sweet and savory coatings. “Be able to help educate and sell your audience on what the best choices are,” says Boucha.

Keeping that much product in stock may be challenging in terms of space, but there’s little concern about shrink. “One of the good things about the California almond is it’s very stable on the shelf,” says Fisher. “The oils in almonds are more stable versus walnuts or macadamia nuts. They last at least a year in ambient storage and up to two years in refrigeration.”

Bohaty shares a similar opinion. “One of the benefits of almonds is they’re high ring and low shrink. Don’t be afraid to build some larger displays of them.”

Besides having a variety of nut types to choose from, it’s beneficial to stock bags in several sizes. “Consumers ranked almonds far above other nuts in a variety of attributes, including ‘on-the-go (84 percent)’ and ‘convenient/easy to eat (83 percent),’” says CAB’s Spence. As a result, “it can be helpful to ensure that almonds in the produce section have convenient packaging so consumers can continue to use them on the go.”

Baker sells nuts in different sized bags depending on the season. “We like to hit on the vacation and summer seasons, and all the outdoor activities by carrying smaller packages during the summer,” he says. In the winter, the store stocks larger bags for people interested in baking.

In addition to offering nuts in convenient packaging, Baker attributes his store’s uptick in sales to increased promotions. “We’ve almost doubled the number of ads we’ve run in the past year for the coming year,” he says.

There are many other ways to spread the word about the availability and benefits of almonds — beginning with displays. “They need to be highly visible, in attractive packing and in high traffic areas of the store,” says Boucha.

“We typically have them on the sales floor in either shippers or bin tops,” says Baker. “It’s like everything else: The more exposure you give them, the more likely it is that customers will pick them up.”

In addition, find ways to communicate the many ways to make almonds part of snacks and meals. “Marketing almonds by pairing displays with apples and other healthful foods like bananas, granola or dried fruit can help increase sales,” says the Almond Board’s Spence.

“I personally like them on salads,” says Fisher. “It gives them a good mouthfeel and crunch.”