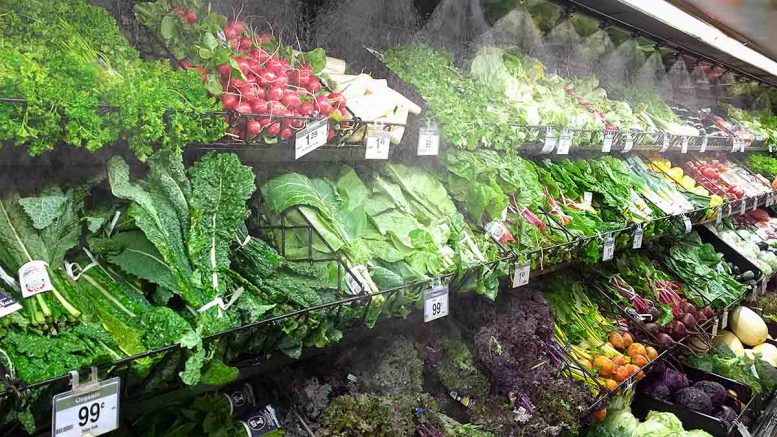 For retailers who prefer a flood of foot traffic to a drizzle, misting systems in produce sections have the potential to nourish consumer experience through a touch of theatrical flair combined with fresher, longer-lasting fruits and vegetables.

How they can be applied varies from store to store, but leaders in the ever-changing misting technology space estimate at least 70 percent of chains are using these systems to some degree.

“Produce that gets misted and is sold by weight has an average of about 5% greater weight retention,” says Oleg Kuts, marketing team manager at Miatech, based in Clackamas, OR. “The result is fresher and better-appearing produce for your customers, about a one-third greater retention of produce vitamin content and an increase in sales of the produce sold by weight.”

He also points to surveys that show a quality produce department is the second-most important criterion for shoppers when choosing stores, so there is an even greater “soft and immeasurable return on investment” from misting.

The next step for these technologists is to persuade retailers of the merits of their ongoing system tweaks, a task that requires proven results and trust.

“Nationally, grocery stores are paying about $450 million annually for slip-and-fall accidents,” says Kuts. “Many of these are associated with directional misters in which the head has been misdirected toward the floor.”

Miatech overcomes this issue with its nozzle-free mist bars that Kuts claims ends the concerns over these types of accidents.

Bacterial resistant and without the need for extra cleaning from store personnel, he says these systems more than double shelf life. 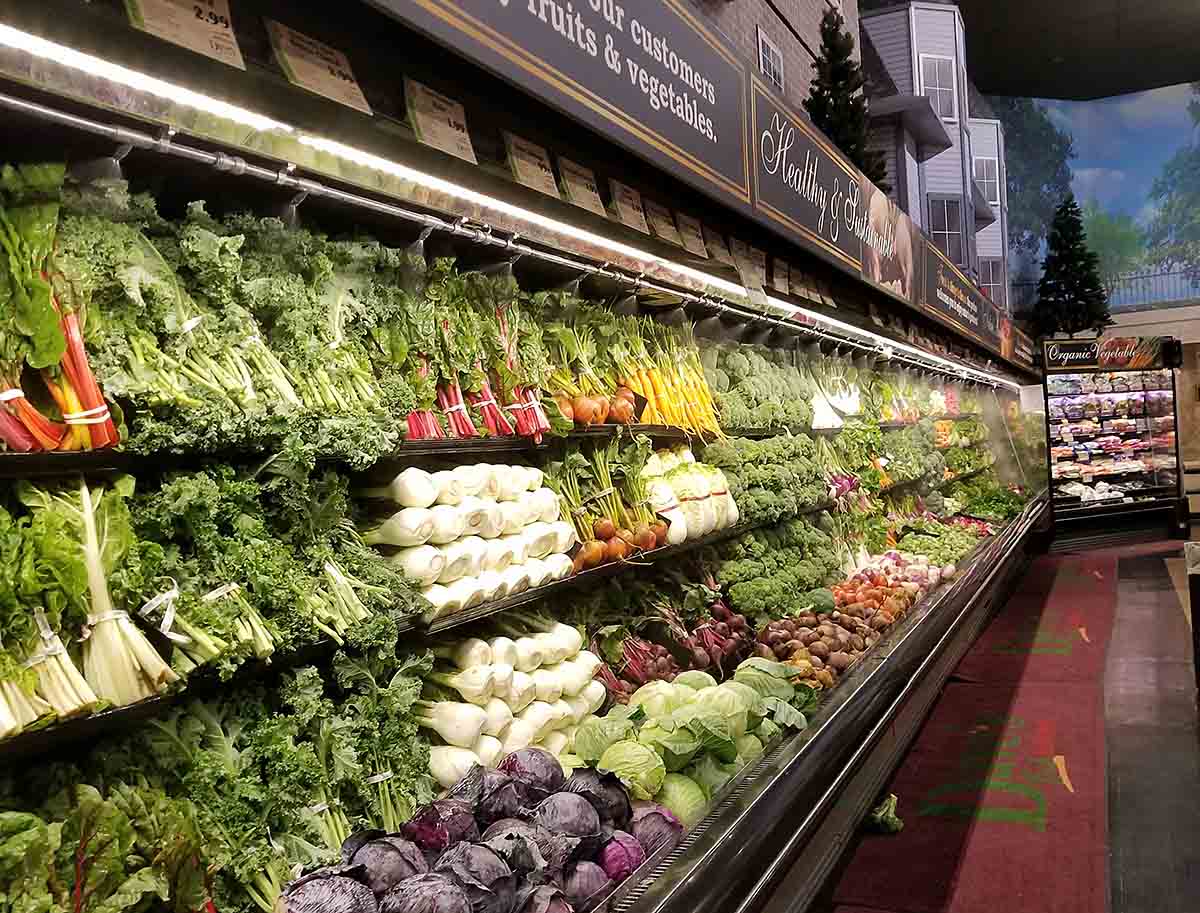 “It may surprise you to learn that about 81% of the cost of ownership of perishable control equipment is made up of maintenance,” says Kuts. “Besides advancements in the system, we are continuously working on improving our service programs.”

Emily Stavrou, vice president of Corrigan in Gurnee, IL, says her company’s prices have trended downward over the years, even though the technology has advanced.

“The most expensive misting system is one that is not working,” says Stavrou. “We took a call today for a replacement system that was 20 years old. I’d say 20 years running is a terrific ROI.”

She says improvements in nozzle design have been the biggest advancement in misting technology, with Corrigan offering a low-flow fogging nozzle that provides a gentle mist.

“It has the lowest flow rate in the industry; the controls coupled with the fogging nozzles allow for full coverage,” she says. “This is important because the moisture, which is crucial for perishable protection, settles on the produce and doesn’t overflow out of the case or get blown away by the air curtain.”

Stavrou points to Deirdre Holcroft’s May 2015 white paper, Water Relations in Harvested Fresh Produce, as an example of how misting can reduce water loss in vegetables.

“The study points out leafy vegetables begin to wilt after just a 3% to 5% water loss, and for blueberries, just a 3% weight loss could mean a loss of $150 per pallet,” she says. 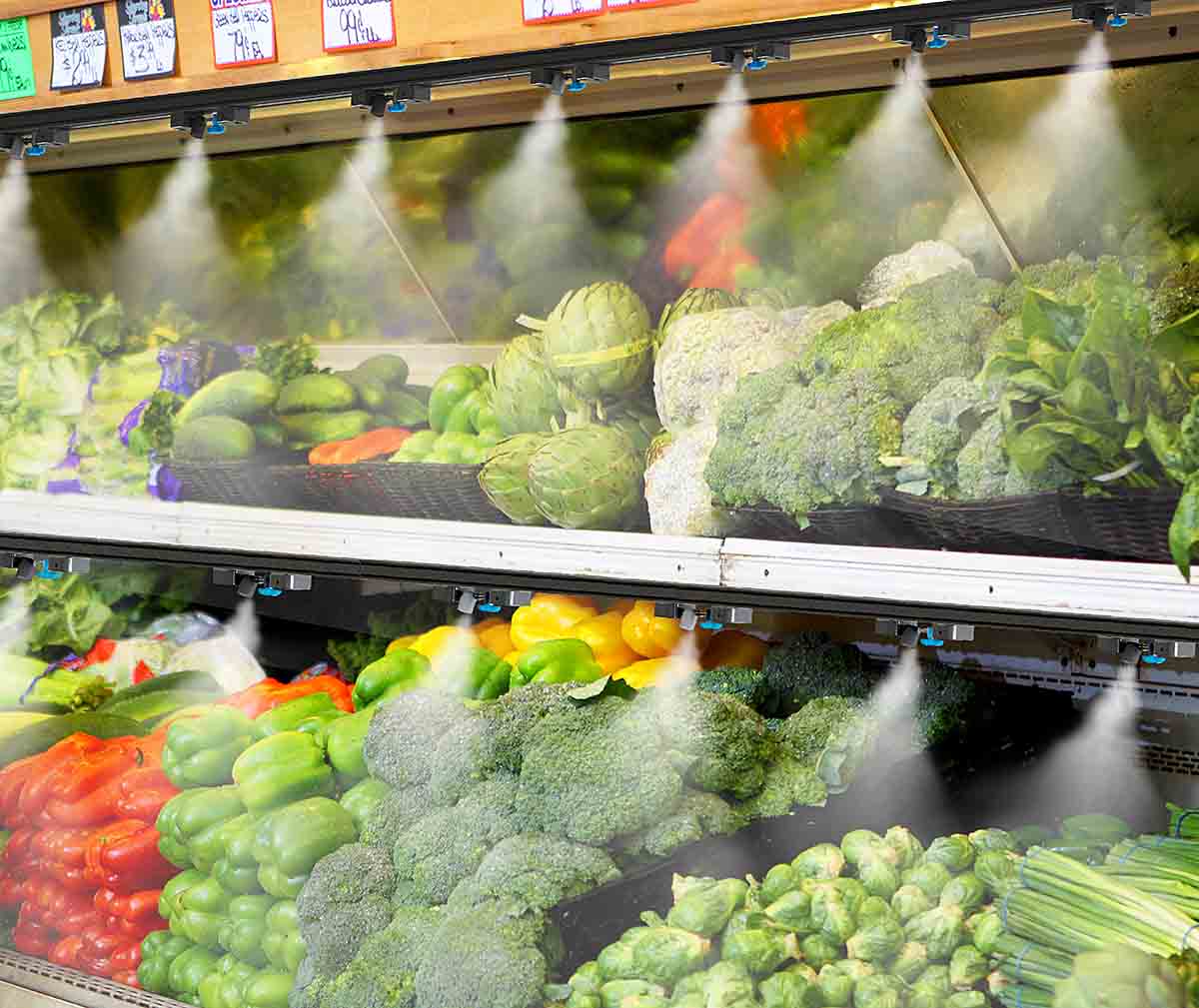 Vered Kleinberger, marketing director at Prodew Misting in Marietta, GA, says misting systems are “fairly fool-proof,” with the only requirement being basic maintenance such as changing filters on water filtration systems.

She says her company’s traditional misting systems — VersaFresh and Oasis — are very affordable with a return on investment in about six months, a time period that is similar for Prodew’s newer system FogMist, which costs more but saves on water and maintenance costs.

“This system combines compressed air and water to form a super-fine water droplet that doesn’t get the product, cases, floor or customer wet,” says Kleinberger, describing the tech as a game-changer. “The fog-like mist requires less water than traditional misting, and it creates a theatrical effect in the cases.”

Although mushrooms are extremely sensitive to moisture and cannot tolerate traditional misting, Kleinberger says FogMist is able to bridge the gap to include the more fragile commodity.

“In a study of mushrooms, we found without humidification, the shelf life of a number of mushroom varieties is about 24 hours, while with our FogMist, the humidification mushroom shelf life is increased to three to four days,” she says. “This is exciting news and previously unheard of in the produce industry.”

The company is also looking to roll out new technology in the near future that mimics ultrasonic systems used in Europe and the Far East.

“Prodew’s ultrasonic system works through patented technology whereby ultrasonic droplets are created without the use of stagnant water in reservoirs, thus eliminating the safety concerns associated with other ultrasonic systems,” says Kleinberger. 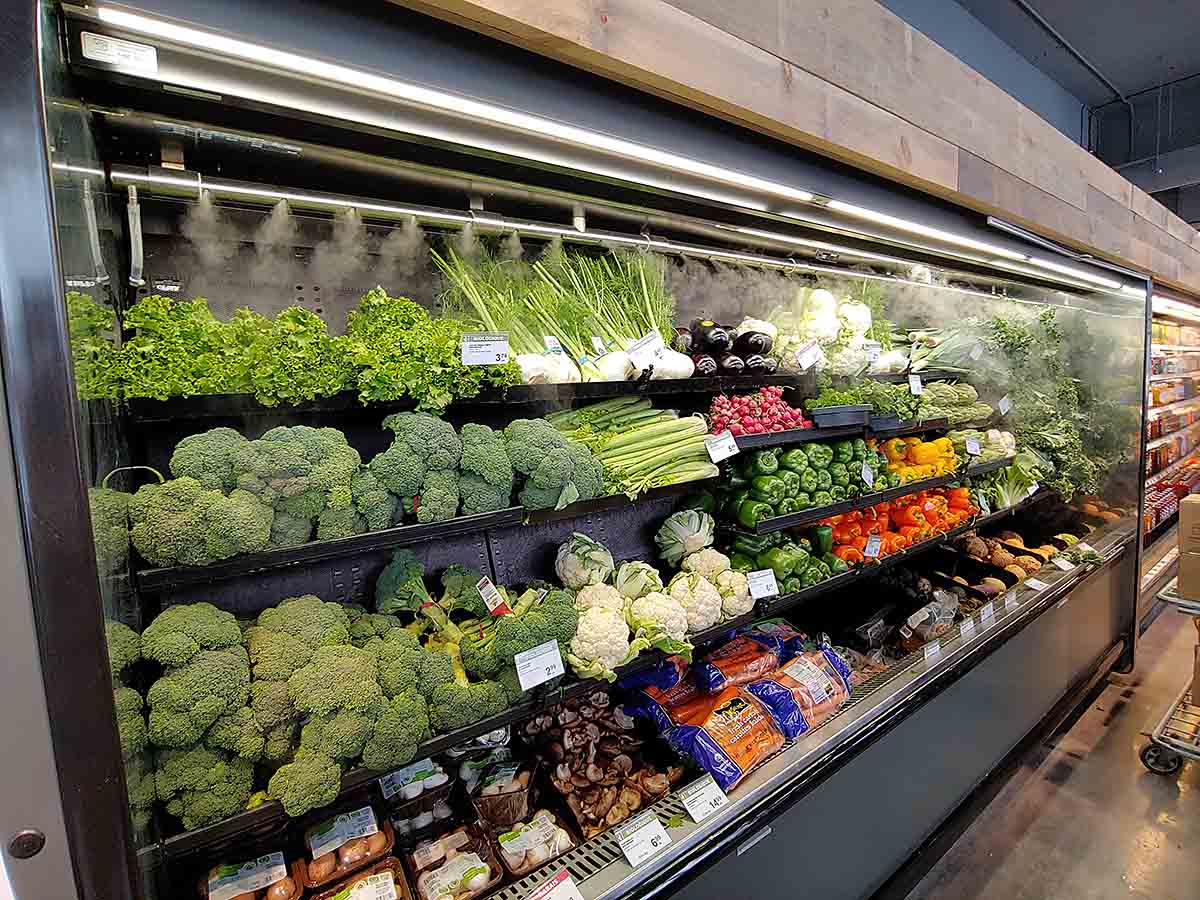 For Anna Pacitto, who works in business development at Areco North America in Kearny, NJ, an important distinction needs to be made between misting and nebulization.

“When presenting to a retailer, one thing I ask them initially is equate it to nebulization to your own body,” she says. “When you’re thirsty, you don’t throw water on yourself, so why would we think that’s the right solution for the fresh foods that we have in our cases?”

She says fresh food needs to hydrate by absorbing moisture naturally, with fine fogging nebulization representing a “paradigm shift” for the sector.

“Our system is very different in that Areco nebulization takes a drop of water, and through our patented technology, we have ceramics that beat 1.7 million times per second; that is what creates this very fine vapor,” says Pacitto. “It’s a combination of the optimal temperature and humidity that allows the product to naturally absorb water.”

The technology originated in France, and Pacitto says it is used in about 5,500 locations globally, however entry to the North American market only took place three years ago with a presence now in just more than 100 retailers.

“Some of the misting companies have tried to duplicate our technology,” she says. “But it still wets the product, and it doesn’t present to the retailer the benefits that our system does.”

Working with a retail partner in Ontario, Canada, Pacitto says Areco has proven its technology works in a non-refrigerated produce case, maintaining optimal temperature for fruits and vegetables while extending shelf life and reducing waste.

“Compared to other misting systems, we provide additional energy savings because our system operates 24 hours a day at a lower wattage, so it actually consumes less electricity,” she says. “We also use less water throughout the day.”

Pacitto cites a long list of fresh produce items that do well under nebulization vapor, and these are cited by misting company representatives, as well.

“Nebulization is perfect for delicate leafy greens — various lettuces, living greens, herbs, radishes, the extended shelf life is up to four days,” she says, clarifying that period is in extension of the results of traditional misting systems, so in essence it’s up to almost a week.

“Beyond delicate leafy greens, nebulization is good for pepper, zucchini, cauliflower, celery,” she says. “Fruits without thick skins — such as strawberry, apples and pears — will benefit greatly from the Areco nebulization system in maintaining a perfect environment, keeping food fresh and hydrated.”

Stavrou of Corrigan says mushrooms, garlic and Russet potatoes are good examples of produce that won’t do well under misting systems, while Prodew Misting’s Kleinberger emphasizes nozzles must be turned off so as to not mist certain items that don’t lend themselves to the practice.

“Really, almost all vegetables do well,” says Kleinberger. “Why not mist green beans? If you get a good-quality bean without rust, misting will keep the beans from getting rubbery and dried out.”

And apart from the shelf life benefits, the technology can bring a bit of showmanship to the store, as well.

“The sounds of thunder or rainforest birds accompanying the mist adds to the interactive experience of selecting what goes in tonight’s salad,” says Stavrou, noting sounds should only occur for a few seconds. “Judging from our experience with social media, most customers enjoy the mist, some find it fascinating, and many think it is a bit of nostalgia from when they were kids and couldn’t wait for the mist to come on [outdoors] and sprinkle their fingertips.”