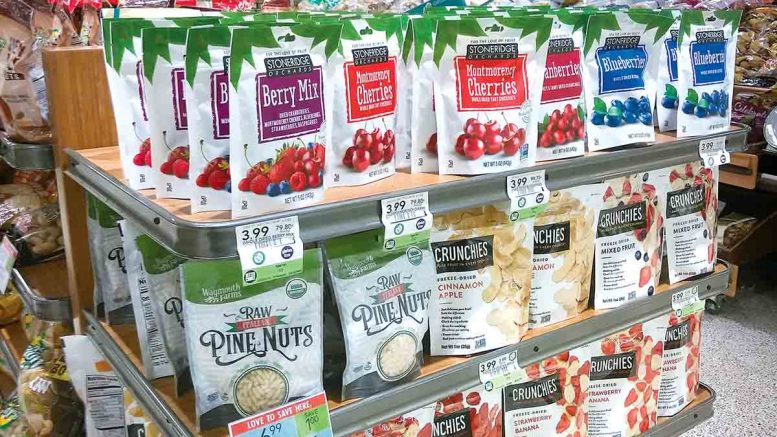 As dehydrated and freeze-dried produce gains momentum with customers, retailers are embracing a host of best practices for merchandising and promoting them. More and more, these healthy snack items are showing up in the produce department:  from freeze-dried blueberries, mangos and bananas to dehydrated snap peas, green beans and more.

Typically sold in convenient pouches, the sweet/salty morsels are gaining traction in produce sections nationwide. These items are marketed in a variety of ways — as part of lunch, a snack, on cereal, and other items.

Freeze-dried food is flash-frozen and placed inside a vacuum pouch or container. Unlike the long dehydrating process, water in freeze-dried food vanishes quickly. The fast removal of moisture prevents the food from shriveling or looking “deformed,” as it can often do during the dehydration process. Typically, freeze-dried food rehydrates more quickly than dehydrated food.

Dehydrating fruits and vegetables is one of the oldest forms of food preservation techniques. The process removes water where the microorganisms that break down food live. This slows the growth of bacteria, yeasts and molds, as well as the enzymatic reactions within the food. In the end, dehydration offers a much longer shelf life, while maintaing much of the produce’s nutritional value.

Health On the Go

The produce departments of some large retailers had given up on dried fruit over the years, Batcheller points out, with pressure to merchandise it in their Natural/Grocery departments. “However, as dried fruit has improved with fewer preservatives, innovative items and better packaging, produce departments are happy to have the items back and regain the foothold. This has been a net positive overall, because Natural and Grocery still keep a good portion of their sales.”

As a 36-year-old dried fruit company, “we’ve had to continue to innovate,” says Batcheller. “Gone are the days of simply mixing in a few different raisin varieties. We, as producers, have to help our retailers create new subcategories. We created Good & Ugly Fruit and Nut Bites, which are all-natural. Bites are quickly becoming the new ‘bar’ in snacking. Consumers are also adding dried fruit to their yogurts and smoothies.”

The shift back to healthy snacks not only is on the minds of customers but also companies that are trying to deliver a targeted message.

“At Crunchies, we know our consumers are focused on better-for-you snack options, not only for themselves, but for their entire family,” says Brian Dudek, vice president of sales and marketing for Calabasas, CA-based Chaucer Foods, a leader in the freeze-dried industry. “When we conducted a consumer study back in late 2016, it helped us understand what they wanted. What we found is that our products were already delivering, yet our message was not. So as we re-branded the line, we made sure to tailor our message around the simplicity of our ingredients, farm-to-table traceability and the unique texture and taste our products had to offer.  This allowed us to get ahead of what is now a huge trend in the industry, transparency.”

As manufacturers are innovating and consumers demand more, Batcheller of Great Lakes International and his colleagues see retailers, especially the independents, which are more nimble than chains, add merchandising space. The small chains will cross-sell and make displays all over their departments, especially with in-and-outs and shippers. “For large chains, it’s often just a four-way shelf, but some are really devoting more shelving, upwards of 30 feet. The specialty and natural food chains have always been much more proactive.”

Cross-merchandising opportunities naturally present themselves. Says Batcheller, “If you think of dried tomatoes, it really doesn’t go with the snacks; they sell best as a salad topper. The best retailers will put sun-dried tomatoes with their fresh tomatoes, in the coolers with fresh greens, and then with salad toppers. Three locations, for one item, but it always moves the needle.”

Batcheller’s advice to retailers hoping to sell more is two-fold: build bigger displays “and don’t be afraid to try some of the smaller, up-and-coming brands. There are really some passionate food entrepreneurs out there who want help bringing safe, clean, natural foods to the marketplace.”

As Natural As Possible

Kevin Doyle, the owner of Forest Mushrooms, Inc. in St. Joseph, MN, says his company’s highest volumes go to grocery stores for sale to individual consumers. “Second is to chefs, and thirdly to food manufacturers.” He and his staff see the quantities taken by the grocery stores going up.

Forest Mushrooms packages and distributes 14 varieties of dried mushrooms for retail sale, plus various other kinds for sale to chefs. The dried mushrooms are usually displayed hanging directly over the fresh mushrooms in produce displays, or in bulk dispensers that are also located in the produce section. They are marketed as stand-alone ingredients. “Some dried mushroom powders are now being used in commercial soups and sauces,” he adds.

“In its purest retail form, walk into your local Trader Joe’s or Sprouts and you will find barrels of dried fruits and nuts,” says Cole Firman, director of sales and marketing for Cooseman’s Worldwide, Inc., marketers of specialty produce based in Christiansted, Virgin Islands. “Nothing flashy, but a simple plastic scoop to shovel as much as you want like a candy store. Eating fresh and healthy is our mindset, so I think keeping it as natural as possible is the focus.”

Firman points out that “We live in a world of social media where food is all the rage, as well as the need for transparency. Consumers not only want transparency in government, but want to know how our food is made, how it’s grown, and where it comes from. Consumers wish to connect. One great picture or one great story can make a product go viral.”

Firman and his colleagues see a lot of push for healthy snacking, he reports. “However, I feel the offerings for dried fruit snacks are almost all the same, just a different label. Another granola bar.”

One thing Firman and his team see is growth in dried chilies. “Coming from all over the world, there’s so many varieties. Consumers want to stay in touch with their culture or even experience a different one, and food is a great conductor. Even Chipotle (Mexican Grill, Inc., a fast-casual restaurant chain) is named after one.” He suggests to retailers that they expand their specialty offerings.

Firman cites lotus root chips — used most commonly in Asian cuisines in broth soups or stir fries — as one of the ways these products are being used. “Recently, I got a call from an intern working at a food science research center asking for fresh lotus root. They only wanted a case, but I wanted to make the intern look like a star. Once there, I got to find out that lotus root has great absorbing properties. They were experimenting different seasonings to come up with a healthier chip option. We already see baked chips being promoted as a healthier option. This is something to look out for in the future.”

CDS Foods, a Montreal-based broker of fresh produce since the late 1980s and the country’s largest importer of fresh garlic, fresh ginger and shallots, markets the City Snacks line of fruit snacks made from freeze-dried fruits with no sugar added, nor additives or preservatives. The City Snack line is available in seven different flavors: banana, strawberry, strawberry/banana, pineapple, apple, peach and pear. Some retailers are merchandising them alongside fruits and vegetables.

“Both are working well, and the snacks’ popularity is growing,” says John Della Santina, CDS’s managing director. Although the company admittedly has not done much marketing of the line, Della Santina says, “they sell themselves.”

In some stores where they are placed with produce, he reports, the line is “doing great. Retailers who know the product allocate a few rows of shelving to it.” Placing the freeze-dried product in visible areas “obviously really helps sales, and having it in health or fruit sections work best.”

Consuming them as a quick, healthy snack “would be first on the list,” he adds, “but sprinkling them on yogurt or in cereal are popular choices.”

From what his company’s research has shown, City Snacks appeals to people who are health-conscious. Young mothers and kids are the groups who most like and enjoy the product. Sales are best in health food stores or large chains with health food sections, and it’s a quick tasty snack with 100 percent real fruit.”

Retailers sometimes err in their handling of dehydrated and freeze-dried items, says Batcheller. “They either don’t allow enough space — many saying that produce is for ‘fresh only’ — or they only put it in the knee-knockers.”

Many of these items are impulse, he notes, “but they also have a long shelf-life and very low shrink. As one produce retail veteran recently told me, ‘Don’t tell my competitors to build bigger displays — it’s like finding money.’ ”

One mistake Doyle has noticed some supermarkets make is displaying dried mushrooms at floor level, under the fresh displays, which he views as “very ineffective.”

Doyle and his executive team recommend retailers make sure the dried mushrooms are displayed near the fresh mushrooms so that shoppers who like fresh mushrooms can be prompted to buy dried ones visually. “Keep a good variety of them on display at eye level, and keep them dry and well labeled if sold in bulk.”

That being said, dehydrated and freeze-dried items continue to stir product department volumes, and promise to do so for years to come.