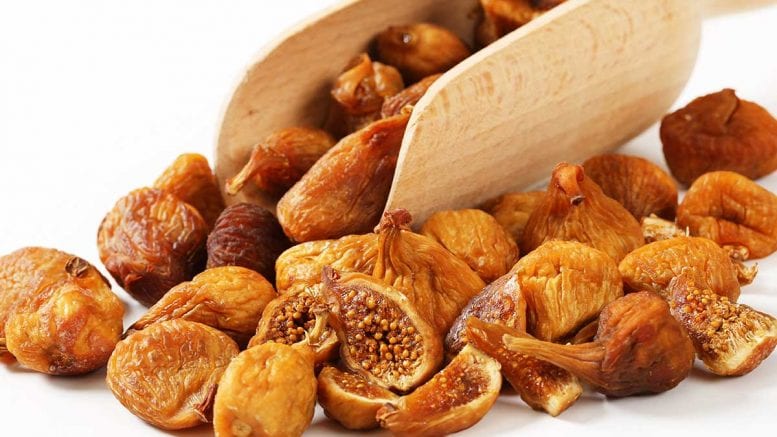 Year-round marketing focusing on the traditional and trendy is key to boosting sales.

Today, 98% of all figs produced in the United States are grown in the Golden State, according to the report, Figs, last revised in October 2018 by the U.S. Department of Agriculture’s (USDA) Economic Research Service’s (ERS), headquartered in Washington, DC. Of this, 87% of the crop was processed, with dried being a major form.

The advantage of dried figs is the ability to stock this fruit year-round, rather than just during its fresh domestic season from May to December. The United States imported nearly $52.1 million worth of both fresh and dried figs in 2017/2018. This availability, combined with a shelf life measured in years rather than days, weeks or months, translates into dried figs being a valuable portion of produce department sales. The trick? Promote 365-day usages that span both the trendy and traditional. Even more crucial, make sure customers know dried figs are available and how to enjoy them.

“For us, dried figs are something we carry in our produce departments,” says John Savidan, senior director of produce and floral at Gelson’s Markets, a 27-store chain headquartered in Encino, CA. “This placement (rather than in the grocery aisle) provides us the opportunity to carry a wide variety of items year-round that a traditional grocery may not be able to or want to offer. Dried figs for us are not a seasonal item but rather a daily staple in our produce arsenal.”

There are two primary types of dried figs sold in U.S. grocery retailers. Mission, which are dark purplish in color with a sweet taste, and Golden, which are light amber in hue with a slightly nutty flavor. California figs are grown conventionally and organically. As for imports, Greece, followed by Italy are the two largest suppliers of dried figs to the United States. Heaviest import volumes during the 2017/2018 season were in the months of November through February, according to USDA ERS data.

“We offer a few different pack sizes of dried figs year-round, and we do capitalize on an imported string fig for the holidays,” says Gelson’s Savidan.

String figs are so called because each single fruit’s stem is tied with a piece of string.

Figs recently received a big boost to their popularity. Firmenich, the Geneva, Switzerland-headquartered world’s largest privately owned fragrance and flavor company, named fig the “Flavor of the Year” in 2018. The company cited the fruit’s numerous health benefits, positive associations with the popular Mediterranean diet and sweet and satisfying flavor. Additionally noted were figs’ endless opportunities across a wide range of food categories. In fact, global growth of fig-flavored products increased an impressive 84.3% from 2012 to 2016, according to a Dec. 7, 2017-published press release by Firmenich announcing the fig’s trendy honor.

“Fifty percent of all new products with figs worldwide list a health and nutrition function on the label,” says Karla Stockli, chief executive of the California Fig Advisory Board, based in Madera, CA. “As the demand for healthy, functional food increases, so does the demand for figs,” she says.

Dietary fiber, antioxidants and key minerals such as calcium, magnesium and potassium are among figs’ nutritional benefits as are fat-, sodium- and cholesterol-free claims. Buzzwords such as gluten-free, vegan, all-natural, no additives/preservatives, convenient and portable also make figs popular as ingredients and for snacking.

“Snacking is definitely an enhanced opportunity to sell dried figs,” says Linda Cain, vice president of marketing and retail sales for Valley Fig Growers, in Fresno, CA. To make the product portable, the company packs its Blue Ribbon Orchard Choice brand of figs in gusseted bags with resealable tops in 8-oz. and 2-oz. snack sizes and its Sun-Maid brand in a 7-oz. bag. There are tray and cup-packed figs too.

Even though there’s been more of a shift toward snacking, according to Sasha LoPresti, director of business development and food safety at A.J. Trucco Inc., a Bronx-NY-based importer, distributor and wholesaler of fresh produce, dried fruits and nuts, “The holidays are still the biggest time for fig sales.”

Figs have long featured prominently in dried fruit displays in the produce department for the winter holiday baking season.

“We have a bulk food department in most of our stores that carry dried figs, so we don’t typically carries them in produce,” says Randy Bohaty, produce director for B&R Stores, an 18-location chain based in Lincoln, NE, which operates under the Russ’s Markets, Super Saver, Apple Market and Save Best Foods banners. “However, we do bring them into produce around the Christmas holidays.”

A ‘crown’ or circular-shaped pack of dried figs, typically 9- to 14-ounces in size, is popular for holiday displays.

“We get dried figs from California and Turkey year-round, and we’ll bring in Kalamata figs from Greece, which are more unique, for the holidays,” says Trucco’s LoPresti.

It can seem risky to try to turn what customarily was a seasonal product such as dried figs into a year-round seller. To do this, Gelson’s Savidan recommends “committing from all angles: merchandising, product knowledge, samples and retail pricing to help get these in baskets.”

One of the biggest merchandising challenges is that dried frigs are a niche item, representing only about 3% to 4% of dried fruit category sales in the produce department, according to Valley Fig Growers’ Cain. “Yet, they are an impulse item. Therefore, it’s important to get prominent and enough display space so customers will see the product and pick it up. Plus, if the product isn’t there, that’s automatically a missed opportunity for a sale. The advantage is that dried figs have a two-year shelf life or essentially zero shrink factor.”

At Gelson’s, “We will typically do dual displays when we want to get aggressive, one in the traditional dried fruit sets and another larger satellite display. You can find a dried fig display in our stores cross merchandised with fresh gourmet cheeses from October through December,” says Savidan.

“Many consumers have yet to try a California dried fig. When they do, they are surprised and delighted by the unique flavor and also excited to learn about the functional benefits and versatility of figs. As a result, the California fig industry is working with several retailers across the country to execute in-store demos. Showcasing figs in simple recipes like fig toast (bread, nut butter and figs), fig flatbread (flatbread, melted fontina, figs and arugula) and fig bites (walnuts, blue cheese, ginger and figs) is terrific for demos,” says the California Fig Advisory Board’s Stockli.