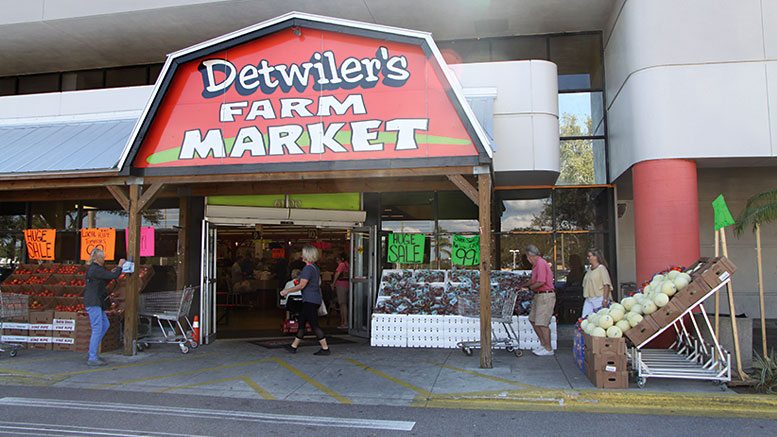 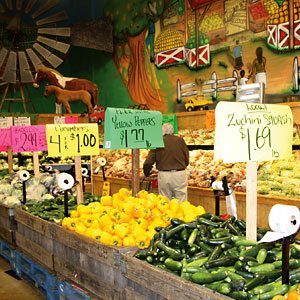 Produce is in the DNA of the family members that run Detwiler’s Farm Market, a Sarasota, FL, area three-store retail operation on the Suncoast of the Sunshine State, that is set to expand to four. Though the chain’s first store opened in 2009, the company’s owners have long sold produce.

Fresh produce is promoted and merchandised heavily in the family-owned and operated stores, which include two stores in Sarasota and one in Venice, FL. The stores market and merchandise produce in a farmers market located inside.

Shoppers entering the store on University Parkway and Lockwood Ridge Rd. — the company’s third store – immediately see the special deals they can find with produce. Those deals, such as separate large displays of blueberries and strawberries, are prominently merchandised in large displays in the produce department’s entrance, which is immediately to the right of the doorway.

Produce accounts for a third of square footage of the 29,000-square-foot store. The store, which opened in 2015, is on Sarasota’s north side, just east of the Sarasota-Bradenton International Airport and not far west from the Interstate 75 exit at The Mall at University Town Center.

In May, the store plans to expand into Manatee County’s North River area (the cities of Ellenton, FL, Palmetto, FL, and Parrish, FL), by opening its newest store on the east side of Palmetto on U.S. Highway 301. At 49,000 total square feet of retail operations, it will be nearly twice as large as its largest store on University Parkway. Produce is to account for a fourth of square footage. The new store’s grocery section will be smaller than at other chains, says Sam Detwiler, president. “For us, produce is everything,” he says. “You will very seldom see an ad break without produce in front, where it’s not leading.”

Henry Detwiler, Sr., grew up on a small farm in Franconia Township, PA, and sold produce as a teen with his brothers and at his grandfather’s butcher shop that included a retail store. After marriage, he moved to Florida, where his wife, Natalie, who co-founded the stores and oversees bakery, was from, and worked in construction for 10 years before relocating to Farmville, VA, selling produce at a farm market. The family returned to Florida in 1999. After briefly working in landscaping, Detwiler returned to produce, which his sons enjoyed.

Detwiler helped an egg farmer who had been struggling with his produce stand. Detwiler opened a 12-foot by 10-foot roadside stand at the egg operation east of Sarasota, which he later doubled. In 2002, the Detwilers became partners with a nearby citrus farm stand operation on a better roadway which provided increased visibility and fresh produce sales quadrupled.

In 2009, Detwiler opened his first retail store on Palmer Boulevard., on the east side of Sarasota. A few years later, he opened another store in nearby Venice. The operation learned how to sell produce by placing tomatoes, watermelon and cantaloupe on tables. In 2014, seafood was added to the produce and deli markets.

Detwiler’s sons grew up in the business, working with their dad after school and weekends. Detwiler first procured produce in a pickup truck. Later, he bought a flatbed truck and trailer. When son Caleb Detwiler, produce director, joined full-time, he purchased a box truck. Today, the company procures produce via six semi tractor-trailers and two straight trucks.

Sales increased. The University Parkway store experienced 60 percent year-over-year growth until 2017, which saw 40 percent growth. Overall, produce, which accounts for about 30 percent of the operation’s total sales, is increasing 32 percent a year. Last year, produce constituted 40 percent of sales. The drop on paper reflects gains in other departments, including seafood, deli and meat, explains Sam Detwiler.

GETTING CONSUMERS IN THE DOOR

Inside the store’s entrance, hot produce deals greet shoppers. “Produce has a way of getting people in the door,” says Henry Detwiler, Sr. “Nothing’s better than fresh, good fruit. It inspires its own emotions, and we use that to bring people in. A lot of stores will lead you softly. Here, you get hit upside the head pretty quickly.”

Detwiler’s objective is to purchase what they can sell. Once that concept is understood, it’s difficult to lose, he says. An additional philosophy is that sometimes, bigger is better. At the same time, workers must understand how to correctly turn product. “It’s a gut thing that’s learned, not taught,” explains Sam Detwiler. “Our philosophy is to try to take the Cadillac and make it a Chevy (in price).”

A key to merchandising is not taking advantage of every opportunity. “What’s scary with produce is you need to know that not every deal that comes through is for you,” advises Henry Detwiler. “You need to know which area, and how to buy the expensive stuff and mix it in. Don’t be scared to have a higher price as people don’t only want the deals.”

On Jan. 1, the store ran a “dollar day” promotion where bagged apples were sold for $1, mussels and pork chops were marketed for $1 a pound while crab cakes were $1 each. “I always knew that if you give consumers what they want at a price they want, you can sell a bunch,” says Henry Detwiler.

The store carries 380 unique stock-keeping units and deals a lot with tropicals, including malanga, rambutan, dragon fruit and jackfruit. “We always price to sell, not price to make money,” says Sam Detwiler. “It’s real simple. Take care of the customers by giving them what they want at the price they want to pay. They will come back over and over again.”

Produce is merchandised via handmade signs which are placed on items in varying colors alerting shoppers to hot buys. The signs also inform shoppers when a commodity’s taste isn’t as high as normal. A sign above a sweet corn display in late January stated that the corn wouldn’t be as pretty in the coming days because of a frost. The corn, however, remains super sweet and tasty, according to the sign. Customers tell the Detwilers they don’t see such explanations elsewhere.

“Larger signs grab attention,” says Caleb Detwiler. “Pile it high and watch it fly. It adds to the whole farm market experience.” Produce is three to five of the store’s top-selling items and the category places in half to three-quarter of the store’s Top 20 selling products, says Sam Detwiler. He says he recently visited a store where the display said no to him and customers experienced sticker shock. “Sometimes, retailers take too much time to get the formalities right and miss everything else,” he observes. “Does your body, mind and soul and every part of you say yes? If so, you’ve done a good job (with the display). If not, go back to the starting point to try to figure out how to fix it.”

Detwiler also purchases from growers in Immokalee, FL. The stores are becoming so large that major California grower-shippers are trying to sell direct to them, says Detwiler. The chain distributes from a 20,000-square-foot distribution center it opened last year and is moving toward buying almost all its produce direct, he says.

C&D Fruit & Vegetable Co. Inc., in Bradenton, FL, and Alderman Farms Sales Corp., based in Boynton Beach, FL, are some of its major local suppliers. Detwiler places trucks in C&D’s strawberry fields ready to deliver to stores for same-day sales. That makes the store one of the few retailers that can consistently sell same-day product for an extended period of time, says Detwiler.

Local is a big focus. During the winter, about 60 percent of the produce the store sells is locally sourced, which Detwiler defines as anything grown in Florida. “We buy as much local as we can,” says Caleb Detwiler.

Detwiler’s prides itself on its relations with growers. It frequently purchases troubled loads. Caleb Detwiler cited a major Florida East Coast melon importer who offered Detwiler’s stores a deal on trailer loads. The owner tells them stores can change the price tomorrow and sell them heavily compared to other chains with locked-in contract prices, he says. “When the market is in the dump, they can move us loads at cheaper prices than moving to the grocery stores,” says Detwiler. “They know we won’t pocket the deal. We want that deal. We want that load someone kicked.”