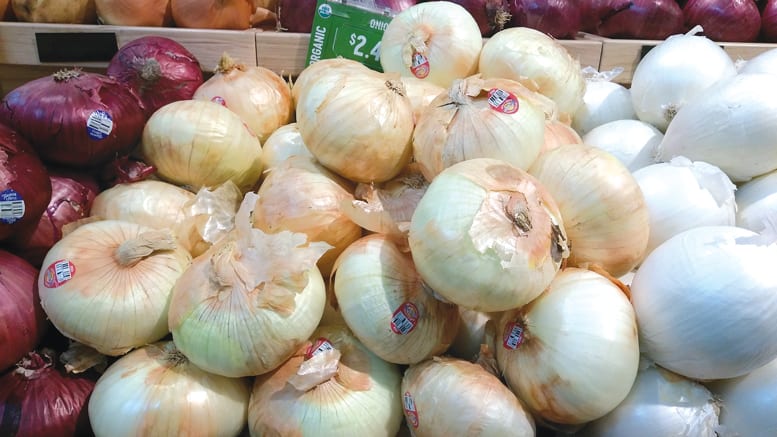 Retailers can maintain sales momentum and experience strong sales by merchandising imported sweet onions the same as they market domestic sweet onions during the spring and summer.

Proper merchandising of sweet onions during the winter is important, advises Mike Tipton, vice president of produce for Schnucks Markets, Inc., in St. Louis. “Sweet Onions have become a consumer favorite, even in the winter months,” he says. “It wasn’t that long ago that sweet onions were not available in the winter, and now customers are able to enjoy that summertime sweet onion all yearround.”

Schnucks has experienced favorable sales growth in winter sweet onions, says Tipton. “Being able to add sweet onions to the promotional calendar in the winter months has helped us drive additional sales to the category,” he says. “As we know, customers have come to expect to have all produce items available year-round. While sweet onions are not an extremely high demand item in the winter months, they still lend to marketing and promotional actively within our weekly ad to fuel extra sales and profits.”

The benefits of winter sweet onions are many, explains John Shuman, president of Shuman Produce, Inc., Reidsville, GA. “Peruvian sweet onions offer retailers one of the longest, most consistent seasons of any sweet onion in the industry,” he says. “Peru can provide the same variety, flavor profile and quality for the consumer for more than six months of the year. This consistency, coupled with a premium product, brings stability to the category and drives sales.”

Retailers can profit by consistently merchandising sweet onions during the winter months, says Jimmy Bassetti, president of J&D Produce, Inc., headquartered in Edinburg, TX. “This will allow them to have a constant supply of an onion that could be enjoyed by all,” he says. “The sweet onion category has grown exponentially and continues to increase, and what better way than having supplies during the winter, which was never the case for sweet onions in the past.”

That consistency is critical. “Peru onions are a great complement to the sweet onion category during the time of year when Vidalia onions are out of season,” says Lauren Dees, marketing manager of Lake Park, GA-based Generation Farms. “Having imported sweet onions allows retailers to offer a consistent product year-round.”

Sweet onions sell well during the winter at New Orleans’ Zuppardo’s Family Supermarket. “They’re (Peru) a good sweet onion,” says Joey Zuppardo, co-owner of the Metairie, LA, store. “We have good demand, but not as much as the Vidalias.”

There’s little difference in merchandising sweet onions during the winter than other times of the year, marketers report. “It is rare to see import onions merchandised as anything other than a sweet onion,” says Dees. “This may commoditize the sweet onion category as consumers may be led to think all sweet onions are from the same region. Educating consumers by highlighting seasonality can drive sales during the slower months after the Vidalia season has ended.” 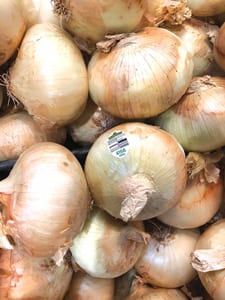 Retailers generally don’t merchandise imported onions differently than domestic, says Bassetti. “In the case of our HoneySweets, we offer a year-round and consistently mild sweet onion,” he says. “Our HoneySweets are a proprietary variety that we developed with the consumer in mind. Sweet and mild, and always available, it’s a tremendous combination for retailers to take advantage of. There is no need to merchandise our onions differently depending on where they are grown, because our onion is the same regardless of where it comes from any given time of the year.”

Though offshore sweet onions pioneer Bland Farms LLC has grown sweet onions in other South American and Central American countries, no country other than Peru has worked well in terms of production and logistics, says Delbert Bland, president of the Glennville, GA-based grower-shipper. The country’s overall acreage and volume remains consistent, and the deal this season should ship 3,000 containers, he says. “Nobody, or no other country, can compete or even come close to the quality of onion Peru can produce,” says Bland. “Everything works best out of Peru.”

“Movement is very consistent as we move from the domestic onions to Peru,” says Breimeister. “When it comes to supplying the consumers with something they can count on as a true sweet onion during the fall and winter months, you go to Peru for consistency. During the winter months, Peru is able to provide shoppers quality and consistency.”

Bland Farms sells as many winter sweet onions as Vidalias. “In average day-to-day sales without promotions, Peru will sell just as much volume as Vidalia in stores,” says Bland. “The stores that sell Vidalias all summer, when they switch to Peru, they will never miss a beat. When shoppers look at that onion, it looks and tastes identical to a Vidalia.”

Onions Etc., based in Stockton, CA, supplies West Coast retailers with sweet onions. Derrell Kelso Jr., salesman, says allocated volume predicates how big of a display a retailer will erect to move volume. He notes increasing sweet onion sales differs from other products, like apples and citrus, which are impulse buys. Onions are mostly used in cooking, which requires planning. “To increase your onion sales, you have to have some way of designing a marketing plan to excite people to want to cook,” says Kelso. “Salads, sandwiches and burgers play a big part in it.”

Sweet onions’ extreme mild flavor allows for raw consumption in salads, burgers, sandwiches, salsas, and other foods, which helps with the product’s versatility, explains Bassetti. “Now they are being grown in Chile and Peru, that creates this merchandising opportunity,” he says. “Consistency builds consumer confidence.”

Kelso advises displaying sweet onions alongside complementary items such as avocados and vine-ripe tomatoes as well as ad sales of ground beef or burger buns. “There’s a lot of different things a retailer can do,” he says. “What we try to do with the retailers we work with is — work on where they store their onions.” Retailers can promote products like a chef and promote items that are on the same plate, says Kelso.

“The stores that offer imported onions just to say they have them, but focus more on margin … it really hurts them. You get out of sweet onions what you put into them as far as marketing, advertising and signage.”

Bland recommends marketing the onions’ taste through large displays with signage, the same way a store would merchandise Vidalia onions during the summer. Customers don’t stop purchasing sweet onions during the winter, he says. “You have to make the people taste the onion,” says Bland. “People are buying because they taste sweet. The stores that try to let people understand what they have and what they taste like, those that have a consistent customer, they do a wonderful job in merchandising. The stores that offer imported onions just to say they have them, but focus more on margin … it really hurts them. You get out of sweet onions what you put into them as far as marketing, advertising and signage.” 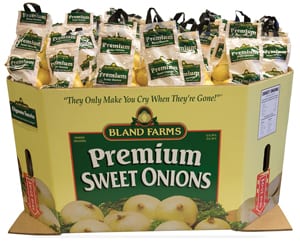 Because of the strong winter consumption, Breimeister recommends large displays to merchandise during key winter holidays, including Thanksgiving and Christmas and sporting events such as the Super Bowl and the NCAA basketball tournament. “Those are all good holidays for sweet onions,” he says. “Sales increase. The one thing retailers have a duty to do for consumers is to put their best foot forward by buying the best sweet onions available. You only have one opportunity to make a good first impression with consumers. The only way to get that impression is to have a large display.”

Keystone’s Blume recommends big displays during the winter. “Large displays sell best,” he says. Still, Blume advises produce workers pay close attention to display care. “As sweet onions are perishable, more so than traditional yellow onions, displays should only be as large as what a retailer can sell through in a couple of days.” Large bulk displays should also incorporate 3- and 5-pound bags, says Blume.

Secondary displays, including island displays, can help generate additional sales, says Blume. “Incorporate bagged sweet onions into the displays to offer consumers a choice,” he says. “The 3- or 5-pound bags typically generate a higher ring at the register, so you don’t want to miss out on that opportunity.” Additionally, bags hold onions smaller than what are typically sold as loose or bulk.

Sweet onions easily can find homes all over the store, which helps shoppers with easy meal ideas, says Dees at Generation Farms. During the appropriate time of year, sweet onions can partner with an outdoor theme to encourage grilling, tomatoes and jalapeños for tailgate salsa or carrots and sweet potatoes near the holidays, she says.

Sweet onions offer many opportunities for cross merchandising. Breimeister recommends end-cap displays, which catch shoppers’ eyes. “While the category has grown steadily every year, there are still quite a few people who don’t know or who haven’t been educated about sweet onions,” he says. “Demos are always a worthwhile merchandising technique. As people become educated through demos and perhaps in-store merchandising efforts, you can grow the category.”