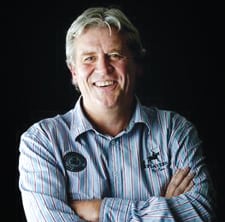 On the day I started writing this column, two things happened in my life. As I was driving to work in the morning, I passed a delivery truck bearing the slogan ‘Making Killer Salads.’ The slogan really caught my attention, and when I arrived at the office I immediately went to the website. At last … A company making salads and fresh produce sexy and hip.

On the evening of the same day on my way home, I stopped at my neighbourhood supermarket to pick up some lamb cutlets for a barbecue. Arriving at the refrigerator where the lamb should have been, I was confronted with a sight which would horrify any carnivore. The entire lamb section had been replaced with — wait for it — bean and broccoli burgers, soya steaks, seitan banger sausages, tofu Italian sausages, fishless fish … I knew that there were vegans out there, but the meteoric rise in diversity of vegan products just astounded me.

Having one passionately vegan son, I have some affinity with the subject of ‘food for the future.’ In two of my recent articles, I wrote about Generation Z fearing the destruction of the world by our consumption-driven society (July 2018 — From The Mouths Of Babes). I also wrote on the great projects that some companies are running in terms of the circular economy (March 2018 — Turning Nickels Into Dimes).

But whilst my research for writing these opinion pieces highlighted a fundamental shift in the world of food, I still was looking at it from a distance. Having grown up in South Africa, I love eating meat. Yet, slowly but surely, I have become increasingly uneasy about this. Maybe the need to radically lessen our meat intake is not welcomed or evident to everybody (there are none so blind as those who will not see), but once the meatless bug bites you, some amazing examples pop up all over the show.

To meet the needs of the hungry billions, there is no way around the fact that we will have to rethink globalfood supply and demand. Not only will we have to be more caring in terms of our natural resources, we will have to develop new ways to sustain mankind.

A case in point is Jaap Kortweg, also known as ‘The Dutch Vegetarian Butcher.’ When he launched his company, he posed holding a meat cleaver, a butchered bunch of carrots and an apron smeared with carrot ‘blood.’ This set the tongues wagging, and being an outspoken person by nature, Jaap flourished in confronting the meat purveyors. Jaap’s story certainly captured the attention. Jaap became a vegetarian after witnessing the large scale-slaughter of pigs and cattle following an outbreak of swine fever and mad cow disease.

However, his love for the taste of meat resulted in a 10-year search to develop meat substitutes with a great bite. Jaap collaborated with experienced chefs and food designers, and today, protein-rich products are made mostly from Dutch organic lupine (plant of the pea family). The Vegetarian Butcher is THE vegan/vegetarian trendsetter, with an amazing array of products. I just love his advertising and tongue-in-cheek communication. Truly a vegan with a smile on his face and a mission in his mind.

Driving to work some months ago, I listened to an interview of our No. 1 breakfast show host with Vivera, one of the first companies in the Netherlands to embark on plant-based meat substitutes. Together with researchers from the Dutch Wageningen University, Vivera created a ground-breaking, 100 percent plant-based steak that was the first of its kind in the world. Tesco — the largest retailer in Europe — jumped at the opportunity and immediately listed the product. Others soon followed, and today the meatless steak is found in many countries. I have tried it personally, and let’s be honest: after a while the smell, taste and bite comes very close to that of a real steak.

So, from a consumption, marketing and creative perspective, all is well and flourishing in vegan land. But why is this important? Rewind to the day on which I encountered the killer salad guys and the meatless refrigerator in my supermarket. That evening – after my fishless fish dinner – I read an article on megatrends, and I quote: ‘With our population expected to reach 9.5 billion by 2050, there is increased pressure to go from growing food to making it. Our already scarce natural resources — farmland, water, energy, etc. — won’t be able to keep up with the increasing number of mouths to feed. So, unless we expect our largely carnivorous culture to become vegetarians overnight, we need more options for producing meat without depleting our resources.’

According to HP’s ( Hewlett-Packard) megatrends analysis, climate disruption such as water scarcity and rising temperatures, as well as unpredictable weather patterns, have the potential to significantly impact food production. To meet the needs of the hungry billions, there is no way around the fact we will have to rethink global food supply and demand. Not only will we have to be more caring in terms of our natural resources, we will have to develop new ways to sustain mankind. At the center of this is one truth: we will have to change our views on food.

Writing this article and reading extensively on the subject has convinced me we have to radically reduce the consumption of meat. As a fresh produce marketer, this is giving new motivation to play a significant role in convincing consumers that fresh produce — if produced in a sustainable manner – is on the side of the angels.