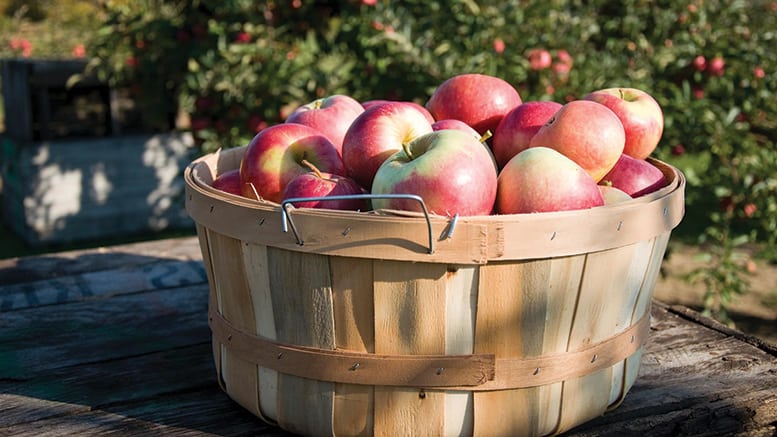 Michigan is the third-largest apple producing state in the United States, behind Washington and New York. It’s the combination of cool nights, warm sunny days and plentiful moisture, all moderated by the nearby Great Lakes, that have provided the ideal environment for great-tasting apples since the 1600s.

French Jesuit missionaries first planted apple seeds in the state’s wilderness, according to Sharon Kegerreis, in her 2015-published book: ‘Michigan Apples: History & Tradition’. A century later, pioneers in the Detroit area began grafting trees that bore now antiquated varieties such as Fameuse, Calville Blanc d’Hiver, Pomme Gris and Detroit Red. Today, Michigan produces an average crop of 25.2 million bushels (1.058 billion pounds) annually, with about half headed to processors and half to fresh-market sales.

“We’ve worked with the same Wisconsin apple grower for years, but three of our stores are located in Michigan and customers there want Michigan-grown apples,” says Jim Weber, produce supervisor at Tadych’s Econofoods, a six-store chain headquartered in Brillion, WI. “The climate in Michigan makes for an especially good Honeycrisp.”

1. CAPITALIZE ON A GOOD CROP

Apples are one of the largest and most valuable fruit crops in Michigan and are available from August through June to July because of controlled-atmosphere storage.

In 2017, Michigan harvested an estimated 20 million bushels (840 million pounds) of apples. This season, the state’s crop was approximated at 33.5 million at the Premier Apple Cooperative meeting held in June in Syracuse, NY. In reality, the pack-out should be somewhere in the middle, according to the Michigan Apple Commission (MAC), the Lansing, MI-headquartered grower-funded nonprofit organization devoted to marketing, education and research activities on the state’s apples.

“This season looks to be a larger crop than normal,” says Don Armock, president of Riveridge Produce Marketing, Inc., in Sparta, MI. “The best guess is 27 to 28 million bushels. We have had very favorable weather for sizing of fruit with the king bloom set plus warm days following bloom. This enhances cell division and sets up the potential for increased sizing. A warm summer, and in some producing regions very adequate rainfall, points to fruit size somewhat larger than normal,” he says.

Nick Mascari, vice president of sales for All Fresh GPS, Inc., in Comstock Park, MI, agrees. “We expect one size larger, 88s, compared to the average of 100s last season.”

More than 16 varieties of apples are grown commercially in Michigan, more if up-and-coming managed or club types are added to the count.

“Braeburns are popular for us,” says Tadych’s Econofoods’ Weber. “We sell three to four times that of Gala or Fuji. Gala, Fuji and Honeycrisp are very popular and there are still customers who want Red Delicious. Cortland and McIntosh are regional favorites, and we have McIntosh nearly year-round. There’s less demand for Jonathan, Jonagold, Empire and Romes.”

At Kowalski’s Markets, an 11-store chain based in Woodbury, MN, “Honeycrisp is the most popular apple,” says Max Maddaus, produce director.

The four top volume apples grown by Riveridge, in decreasing order, are Gala, Red Delicious, Honeycrisp and Fuji. However, this company, like other Michigan growers, is producing ever-increasing volumes of Gala, Fuji and Honeycrisp. This year will be no exception, according to Armock.

“These three have become the new mainstream varieties for us, and the old standards are waning in volume as they are replaced with more productive systems,” he says. “The other evolving trend is that as new strains or types become available in popular varieties the older trees are being replaced with improved, earlier harvesting, better coloring or eating strains.”

Riveridge, as well as Jack Brown Produce, Inc., in Sparta, MI, are growing an increasing number of the Pink Lady variety.

“Two of the newest Michigan-grown varieties we’ve introduced are the Topaz, which is a tart apple more like a Pink Lady or Granny Smith, and the Smitten, which is just the opposite, sweet and crisp,” says Weber.

This will be the first season that BelleHarvest Sales, Inc., in Belding, MI, will have Michigan-grown Smitten available, according to Chris Sandwick, vice president of sales and marketing. “We’ll have promotional volumes of Topaz and EverCrisp for customers to complement their favorite traditional varieties. Both varieties store well and will be available in the first quarter of the year.”

Kanzi and EverCrisp, as well as other newer varieties such as Kiku and SweeTango, are among the 21 commercially grown, legacy-to-managed varieties, available from All Fresh GPS, according to Mascari. “Tastes are changing, pallets are evolving, and our growers continually make their way to varieties that eat and sell better.”

Michigan’s reputation as predominantly a bagged apple state is changing, says Sandwick. “With new growing methods and varieties, tray-size fruit of 80-count or larger is becoming a bigger part of what we sell.”

However, “60 percent of our crop is sold in some type of retail pack. Increasingly, we are putting apples in customer-specific packaging; often private-label. Poly bags are still the backbone of our consumer packaging,” says Riveridge’s Armock.

“We see a decline in mesh-packaging demand from our customers and are increasingly doing pouch bags particularly in higher price point varieties where the high graphic printing capability allows us to do a better job of ‘romancing’ the variety and providing consumer information, which is very important to some consumer segments,” adds Armock.

Tote bags of apples are a hit with shoppers at Tadych’s Econofoods. “Totes offer a farmers market appeal, and 5 pounds of apples is a nice family size,” says Tadych’s Weber.

Some retail customers like to run tote bag promotions in the fall with multiple varieties at a line-item price point, says Armock. “These are usually either prefilled or fill your own bag.”

Location and attention-grabbing displays are the backbone of capturing the apple ‘ring,’ according to Armock.

“Create an apple destination and a point of interruption with high-graphic shippers, display-ready cartons or bins to stop customers in their tracks,” recommends All Fresh GPS’ Mascari.
Push the boundaries of where apples are located in the store.

“Put a display in the deli, the cereal aisle, the bakery, up by the checkout registers, anywhere that might encourage an impulse sale,” suggests BelleHarvest’s Sandwick.

A pouch pack with paper bag graphics is one way BelleHarvest is reminding kids and parents alike to pack an apple for school lunches as a healthy alternative to other types of snacks.

“Retailers can emphasize the consumer preference for the flavor of Michigan apples and the health benefits they offer,” says Diane Smith, executive director of the MAC.

“Everyone knows apples are healthy, but the health benefits of regular consumption of apples are amazing. I think a lot of times other ‘superfoods’ overshadow the many health benefits apples provide. Apples are a good source of lots of vitamins, as well as antioxidants and fiber. They are probably the most cost-effective superfood you can find,” she says. 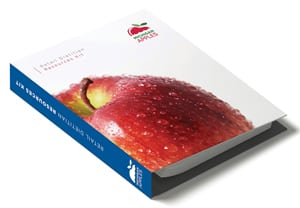 The MAC offers a Retail Dietitian Resources Kit to its grocer partners to assist their in-house dietitian staff in messaging about Michigan apples. The kit was developed with input from Shari Steinbach, MS, RDN, who was employed for more than a decade as Health & Wellness Nutrition Manager for Meijer, a 235-store chain based in Grand Rapids, MI. Steinbach now runs her own nutrition and culinary communications consulting firm.

The kit includes information about the state’s apple industry; varietal, usage and storage information; and copy for blog and social media posts.

Fall is absolutely the most important time of year to feature Michigan apples, according to Riveridge’s Armock. “Consumers are transitioning from summer fruits to the fruit of fall, and apples are the most significant ring for a three-month period.”

Price is one way to promote Michigan apples, but it’s not the only way. Large prominent displays successfully sell fruit, too.

“We’ll have 120 5-pound bags in 600-pound bins that we drop right in the front of the department. It might be three bins of McIntosh and one of Cortlands on ad. Or, we’ll have a bin with 60 bags of Gala and 60 of McIntosh line-priced,” explains Tadych’s Econofoods’ Weber.

Many of the state’s growers offer additional support such as demos, point-of-sale materials and signage, especially to introduce newer varieties.

The appeal of Michigan apples to customers at Kowalski’s Markets is their proximity to Minnesota, where the chain is located, says Maddaus, the chain’s produce director. “Both our company and shoppers are always looking for a product close to home. It is far more appealing to our shopper to buy a product two states away vs. across the country.”

“The local movement has been really important to us for the past several years. People are loyal to homegrown products. They want to support the farmer ‘down the road’ and get the freshest produce possible. Not only do we get support from consumers, but retailers have also been helpful in supporting locally grown,” says the Michigan Apple Commitee’s Smith.

For the second year in a row, the MAC will use Specialty Crop Block Grant funding to partner with a public relations firm to conduct a fall social media campaign. This will include select platforms such as Facebook and Instagram, online influencers and video.

Market research conducted on behalf of the MAC determined that the primary audience for Michigan apples are women between the ages of 25 and 54, and this campaign will target these shoppers.

In the regions where Michigan apples are considered the regional supplier it is important to give prominent displays and signage to call out the local flavor and freshness of product, recommends Riveridge’s Armock.

“Between visits to farms, fruit stands or farmers markets, there is a lot of tourism exposure to Michigan apples and there is that ‘halo’ effect from the memories of vacationing in the peninsulas of Michigan that impacts products at retail. As growers, we receive very good support from the retail community whether the customer is a national, regional or local customer, and this keeps Michigan apples in front of consumers throughout the year.”

Armock notes that an important factor for retail customers is proximity to market. “We are able to ship from east of the Rockies to the Atlantic in no more than 48 hours, and it is often possible to order product and have it packed and delivered in 24 hours.”

Michigan apples are sold in 27 states, south and east from Virginia to Florida, as far west as Texas and Colorado, and into North Dakota and South Dakota, according to the MAC. The state’s fruit is also exported to 18 countries.