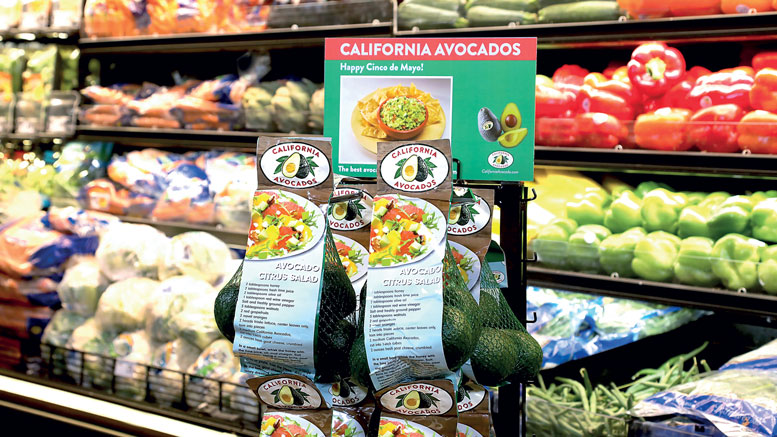 The California Avocado Commission has seen growth in bagged avocados.

Everyone is Mexican when it comes to celebrating this May 5th holiday.

Say ‘Cinco de Mayo’ and parties fueled by guacamole, salsa, and cold Coronas with fresh lime are what first come to mind for many Americans. In actuality, the Fifth of May marks the date when the Mexican Army beat France at the Battle of Puebla in 1862. While this is a relatively minor holiday in Mexico, with Mexican Independence Day in September being a bigger and more traditional celebration, Cinco de Mayo has become synonymous for Americans as a celebration of all things Mexican. And the party starts with food.

“Just like everyone is Irish on St. Patrick’s Day when corned beef, cabbage, and potato sales soar, so is everyone Mexican on Cinco de Mayo, when avocados, tomatoes and limes are big sellers,” says Brandon Bentley, category manager for vegetables at Tops Friendly Markets, a 150-store chain headquartered in Williamsville, NY.

“There was nearly a 7% growth in produce sales nationally between 2019 and 2021 when comparing the two weeks before and week including Cinco de Mayo. In the Southeast, due to demographic mix and population growth, this figure was up 9.1%,” says Jose Rossignoli, vice president of global sourcing for Robinson Fresh, in Eden Prairie, MN.

1. STOCK UP ON KEY INGREDIENTS

Cinco de Mayo’s fresh produce sales are fantastic, says John Savidan, senior director of produce and floral for Gelson’s Markets, a 27-store specialty grocery chain based in Encino, CA. Of course, the leader of the pack is avocados. But there are several other items that pick up for this timeframe. Fresh tomatoes, sweet onions, cilantro and limes all do very well. On the fruit side, you can see mangos, pineapples and melons draw some attention.”

Cinco de Mayo is the second biggest consumption occasion in the U.S. for avocados and guacamole, according to Stephanie Bazan, vice president of trade and market development for Avocados from Mexico (AFM), headquartered in Irving, TX. “Avocado consumption during the Cinco time, the four weeks leading up to the holiday, has grown 27% over the past five years, according to data from Nielsen. The holiday is an important celebration for our consumers and presents a wonderful opportunity to showcase the versatility of avocados.”

Bulk represented the majority (83%) of avocado category sales during the 52 weeks ending Jan. 29, 2022, according to Nielsen data as supplied by AFM.

However, retail sales of bagged avocados accounted for 27% of total avocado units for the 2021 Cinco de Mayo holiday, up from 16% in 2019, reaching 12.6 million units for the holiday week. This was an increase of 85% over a two-year period, which translated to retail sales of $13.2 million of bagged avocados for Cinco de Mayo 2021, according to Jan DeLyser, vice president of marketing for the California Avocado Commission (CAC), in Irvine, CA. “We love seeing the growth in packaged avocados because it generally means increased consumption.”

Bags are a convenient solution for shoppers who plan to make guacamole at their Cinco celebrations, since a party-sized recipe will require at least four avocados, adds AFM’s Bazan. “This also makes bags a great vehicle to promote and drive units per trip during this period.”

Merchandising fruit that is ripe for same-day consumption and some fruit that will be ripe later is a smart idea at any time, the CAC’s DeLyser recommends. “For occasions like Cinco de Mayo when some consumers may be purchasing in advance for celebrations, it would be wise to include firmer fruit on display a week or a few days before the 4th and 5th of May, and then transitioning to more ripe fruit closer to May 5.”

“In May, our Onion Obsession Recipe Club features lots of recipes that highlight the flavors of Mexico which, of course, means great ways to use white onions,” says Teri Gibson, director of marketing and customer relations for Peri & Sons Farms, based in Yerington, NV.

Cilantro is a staple in Mexican cuisine, so Cinco de Mayo is the perfect occasion for cilantro to be promoted, adds Crystal Chavez, marketing coordinator for Gold Coast Packing Inc., in Santa Maria, CA. “It is essential for salsa, guacamole, margaritas, and a garnish to every dish.”

One-pound cello bags of washed and ready-to-chop cilantro are good movers for this holiday for Oxnard, CA-located Boskovich Family Farms LLC. “Green onions by the bunch, as well as washed and bagged, sell well, too, as do radishes in bunches with the tops on,” says Don Hobson, vice president of sales and marketing.

Bell peppers and hot chilies, as well as tomatoes, onions and zucchini are some of the most popular vegetables used in Mexican cuisine, according to Eduardo Herbst, tomato sales manager for SunFed Perfect Produce, in Rio Rico, AZ. “Habaneros have been gaining popularity, whether it be for making salsa or a margarita.”

On the fruit front, Cinco de Mayo is a great holiday for mangos, says Tammy Wiard, retail marketing manager for the National Mango Board, headquartered in Orlando, FL. “Because most of the mangos in-store during this holiday period come from Mexico, it is a nod to the Mexican heritage. Plus, mangos are a natural pairing with popular dishes for the holiday. During early May, three varieties are readily available, Honeys, Hadens and Tommy Atkins, each perfect for adding to salsa and guacamole.”

The NMB offers Cinco de Mango-themed bin headers, recipes like fish tacos with mango salsa and mango margarita, plus a short, downloadable video that shows how to incorporate fresh mangoes into guacamole.

2. INVITE VALUE-ADDED TO THE PARTY

Cinco de Mayo is the second most important holiday in America for pre-prepared salsa sales, just slightly above Independence Day. In 2021, the two weeks leading up to this holiday accounted for 4.3% of the year’s fresh salsa sales, according to Jay Whitney, chief marketing officer for Fresh Cravings, in Phoenix, AZ. “Salsa is integral to Mexican cuisine, with chilled salsa more likely to be affiliated with authentic recipes than jarred, shelf-stable salsas, making refrigerated salsas an ideal ingredient for various entrees, or as a snack.”

The best-selling types of salsas year-round are the traditional tomato-based red salsas, which make up 84% of fresh salsa sales. This remains true for Cinco de Mayo or any other holiday, Whitney adds. “The more likely change is that a consumer may buy more of their favorite salsa or try a new type in addition to their usual, according to Mintel’s Dips and Savory Spreads report released in February 2022. Within our portfolio, our best sellers year-round are Restaurant Style Mild and Medium.”

Gelson’s builds large Cinco de Mayo displays “that are immaculately detailed in high traffic areas. The displays and beautiful products do all the talking,” says Savidan.

Building displays centered around avocados is the perfect start for the holiday, according to CAC’s DeLyser, who adds the commission provides display bins for use during the California avocado season. “There are recipe cards, too, including one for guacamole that is excellent for Cinco de Mayo. What is important for Cinco de Mayo merchandising is to create a festive atmosphere in the produce department.”

Two examples that capitalize on the festivity of Cinco de Mayo are destination centers for avocados and fresh guacamole stations paired with a good assortment of bulk and bagged avocados, says AFM’s Bazan.

“Destination centers merchandise avocados with other complementary items, like tomatoes, cilantro and onions for guac, or beer and chips, making it easy for shoppers to get all the items on their Cinco shopping list in one spot. Fresh guacamole stations are a great addition to in-store Cinco events because they allow customers to sample and help drive fresh avocado sales. The stations are usually positioned at the store entrance, which leads customers right into the produce section where they can shop for bagged or bulk avocados to make guacamole at home.”

Buffet-style displays that give shoppers recipe ideas are a successful theme at Tops Friendly Markets, says Bentley. “It’s all about planting the bug. For example, Cinco de Mayo coincides with Florida sweet corn season. So, we might cross-merchandise all the ingredients for Mexico street corn, such as corn, fresh limes and cilantro.”

This year, AFM is partnering with Mission chips and Modelo beer.

“We know that guacamole pairs well with chips and beer. And we know that Cinco shoppers double their basket spend when buying chips and avocados and spend 1.7 times more when buying beer and avocados, compared to when avocados are not in the basket (according to Numerator). These insights led to our cross-merchandising partnership. In doing this we’re creating a Cinco destination that is designed to drive sales,” says AFM’s Bazan.

The best time to market and promote relevant produce for Cinco de Mayo is roughly two weeks ahead of the holiday, recommends Fresh Del Monte’s Marquardt. “More specifically, we prefer to have two weekends to push in-store retail promotions and make sure consumers are well-prepared for their celebrations. This year, we’re planning to kick off our Cinco de Mayo marketing the week of April 18. This two-week timeframe allows us to get our products into retail position and remind consumers of the upcoming holiday, while maintaining peak freshness.”

The week of the holiday should be the last week of in-store activity or trade promotion, as they almost always show higher sales levels than the week prior, according to Acosta Holiday Forecasts, released January 2021, as shared by Fresh Cravings. “Social media, public relations-related activities should start sooner, as shoppers are planning their parties and searching for entertaining and recipe ideas. Retailers can help with this by having holiday hubs with product recommendations, recipes, etc., in their online tools,” says Whitney. 