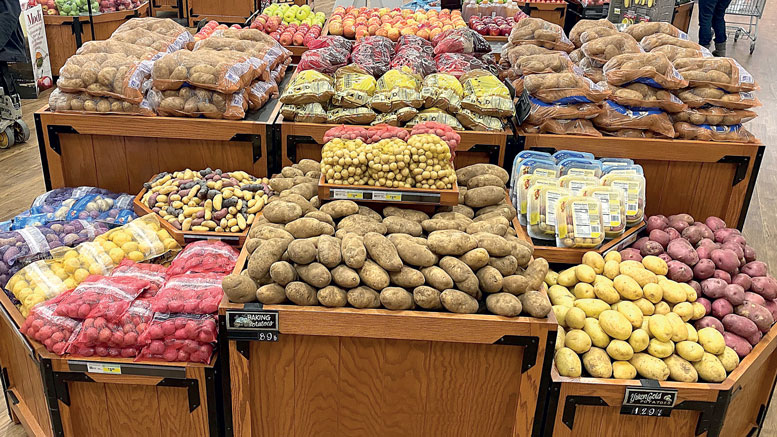 The little tater no one wanted offers retailers an opportunity to butter up register rings.

It wasn’t too long ago that growers plowed under small-sized potatoes since there was no market. Today, one- or two-bite-sized spuds are big.

Case in point, from 2020 to 2021, petite potatoes and medleys grew 9.4% and 6.7% in dollars sales, respectively, according to IRI data as shared by Denver, CO-headquartered Potatoes USA. Concurrently, all other varieties except yellows, which were flat, saw a decline.

What’s more, small packages saw big sales, too. One- to 4-pound bags and trays were up 3.6% in dollars in 2021, representing nearly one-third (34.4%) of category sales, second only to 5-pound bags, whose sales were essentially flat. It certainly seems that the little tater no one wanted has become an asset.

A wealth of product innovation from growers who have taken this naturally quick-cooking tiny tater and combined it with flavorings and packaging to make it even easier to prepare, plus a multitude of merchandising opportunities, offers retailers a good chance to butter up register rings in the potato category with value-added products.

“Value-added potatoes are catching steam, especially with all the innovation. In fact, the microwave trays have taken off for us like bowl salads,” says Mike Roberts, vice president of produce operations for Harps Food Stores, a 114-store chain headquartered in Springdale, AR. “Although consumers are cooking more at home now, they also like to experiment, and these products can offer them new taste profiles.”

More than 80% of retail stores carry some form of value-added potatoes, selling about 50 or more units per store/week, according to Rachel Atkinson-Leach, director of category and brand management for RPE Inc., in Bancroft, WI. “Value-added potato products are items that make the selection, cooking or preparation experience more convenient for consumers, i.e., microwave- or oven-ready packaging, pre-cooked items, pre-seasoned items or items that include seasoning packets.”

Individually wrapped russet bakers are one type of value-added potato product sold at Morton Williams Supermarkets, a 16-store chain based in Bronx, NY. “Others include microwavable bags and trays, and we carry them in different flavors like rosemary and garlic,” says Marc Goldman, produce director.

Single microwave-ready russets represented 1.6% of potato category sales, down 8.6% in dollars during 2021 versus 2020, based on Potato USA data.

Microwave-steamer products are 1.8% of category dollars, but up 8%.

Micro-steamers typically use the petite type of products, adding additional value with the pre-washed, microwave in the bag or tray options, says Ken Gray, vice president of sales and marketing for the Bushwick Potato Company, Inc., in Farmingdale, NY.

“The micro-steamers, both with and without seasoning packets, continue to perform best in the value-added category,” Gray says. “This should not be surprising, based on bulk and bag sales, that petite and medley products are continuing to show growth.”

Four cheese is the most popular flavor of 17.7-ounce trays of Dutch yellow potatoes from Melissa’s/World Variety Produce, in Vernon, CA. The potatoes can be roasted, grilled, or microwaved in the accompanying tray. Other flavors are tangy peppercorn sauce with Dutch yellow and Dutch red potatoes with a Dijon mustard sauce.

“We’ve had these products for three or four years now and they remain steady sellers,” says Robert Schueller, director of public relations.

A recent trend is smaller-sized potatoes packaged with nontraditional seasonings as well as with ingredients to create iconic regional favorites.

This spring, Bushman’s Inc., in Rosholt, WI, will launch three new washed and pre-sized potato products. One contains white B-sized potatoes packaged with salt as a recipe-ready way to make classic New York Salt Potatoes. In the second, Bushman’s has partnered with Tony Chachere’s Original Creole Seasoning and combined this and red B potatoes ready for a crawfish boil. Spicy salt, paired with B yellow potatoes, rounds out the trio of regionally targeted introductions. The grower primarily markets its potatoes east of the Mississippi.

“Two years ago, there was a smaller pool of people that had confidence in the kitchen. Now, since more people have been cooking at home, that confidence is there and people are looking for new options,” says Mike Carter, chief executive officer.

2. SPICE IT UP WITH VARIETY

In its smaller stores, Harps Food Stores offer a base of four different SKUs of bagged, 4 trays, and a sweet potato selection in its value-added potato category, says Roberts. “In some of the larger stores, it will be up to 6 bagged and 6 trays.”

“They aren’t just carrying the russet, red, yellow, and white potatoes that consumers are familiar with. They are also carrying petite, medley, and purple potatoes.”

Incremental SKUS are adding additional sales to a potato set, Dome adds. “They are not cannibalizing the sales of other potato types that are already selling well. The top 10 incremental SKUs are all 5 pounds or less, are various types, and include value-added products. Retailers who are over-indexing on 5- and 10-pound russets are cannibalizing the sales of these products.”

At Harps, value-added potatoes are displayed near premium varieties like Dutch yellows and reds, says Roberts.

“New item launches, which translates to space issues, is probably the biggest challenge for retailers. Retailers can overcome these challenges by utilizing secondary displays and display-ready shippers across produce, meat and other areas of the store. This is an opportunity to add incremental sales without taking space away from new items and core items,” says RPE’s Atkinson-Leach.

Kathleen Triou, president and chief executive of Newport Beach, CA-based Fresh Solutions Network LLC, which markets its Side Delights brand of value-added potatoes, agrees and adds, “These products are impulse purchases, not shopping list items. So, it’s important to get creative in cross-merchandising and placements in, as well as outside, of the produce department. For example, try cross-merchandising in the deli next to the rotisserie chicken. There’s a ton of opportunity for this kind of incrementality.”

Consumers use signage in and out of the store to decide purchases.

In-store, there are two types of potato signage: marketing and price signs, says Potatoes USA’s Dome. “Marketing signs are the ones telling consumers where potatoes are located. Price signs are exactly what they sound like, price tags. Retailers with the best potato sales are using an even number of both. They are telling consumers where to find a potato and then showing them how much it costs. It’s as simple as that.”

Out of the store, highlighting potatoes on grocery social media and showing consumers what to do with potatoes can help them plan at home and encourage them to buy potatoes.

“The goal now is to not only optimize positioning in-store with prominent displays and signage, but also take an omnichannel approach to digital promotion across multiple platforms to introduce the product to the audience,” says Bushwick’s Gray. “It’s easy to pick just one marketing channel and not find success when consumers are experiencing information in so many different locations in today’s digital world.”

The opportunity is there for retailers to capture a higher price per pound on a value-added potato offering versus traditional bagged product, according to Christine Lindner, marketing manager for Alsum Farms & Produce, in Friesland, WI.

However, sticker shock can keep some shoppers from trialing these products. That’s where promotion comes in.
“We’ll put these products on ad. For example, we had Green Giant Minute Mashers in the ad the third week in January,” says Morton Williams’ Goldman.

Green Giant Minute Mashers, by Idaho Falls, ID-headquartered Potandon Produce, are 1-pound bags of red or yellow potatoes available in three flavors: sea salt and pepper; chive and dill and roasted garlic. The potatoes are microwaved for 7 minutes, then consumers smash the cooked potatoes in the bag and serve.

Offering slight discounts on newer products during months with holidays when consumers are already buying a lot of the more commonly known potatoes is bringing in new consumers, says Potatoes USA’s Dome. “The slight price drop is drawing attention to a new product and driving trial from consumers.”

6. BE READY FOR THE FUTURE

Value-added has become much broader than it was several years ago, adds Bushwick’s Gray. “We used to just think added ingredients, etc. Value-added is anything that adds value to the end-user. I think there remains an underserved market for air fryer, instant pot, and crockpot cooking. We’ve seen the continued rise of these cooking appliances grow in presence in households across America and the proliferation of recipes. We could be doing more as an industry to address those trends with products meant to serve those needs, just like we embraced the microwave.”