Tips for holding the line on this delicious, nutritious but declining category.

The fruit section of the produce department has become a more cosmopolitan, crowded space. And as avocados, easy-peeler Mandarins, and the world’s most widely eaten fruit — mangos — all have grown more popular, stone fruit has seen significant declines in consumption.

Annual per-person consumption of peaches in the United States peaked at 13.1 pounds in 1980. In 2014, annual consumption was 6.4 pounds per person, a 13% decrease from the previous year, according to the Ag Marketing Research Center.

Despite some positive signs in East Coast production and with imports offsetting domestic production, steadily reduced stone fruit acreage tells the story in California, which still leads the nation in fresh market peach, nectarine, apricot and plum production. The California fresh peach harvest shrunk from 31,000 to 20,000 acres over the past decade, according to the state’s California Agriculture Statistics Review 2017-2018, while nectarines fell from 29,000 to 18,000 acres; apricots from 11,100 to 8,800 acres; and plums from 28,000 to 18,000 acres.

“It’s not as favorable with Millennials and younger; it’s an older group buying stone fruit,” says John McClardy, president of HMC Marketing Group, Kingsburg, CA. “We’re trying to do something about that.” But because the stone fruit category is large and has untapped potential, here are five things to consider in maintaining a vital program.

Peaches are the seventh most frequently consumed fruit in the U.S., at an average of nine times per year, trailing only bananas, apples, berries, oranges, melons and grapes. But the stone fruit demographic is declining.

“Baby Boomers are diminishing their purchases, and we are moving into a different group,” says Don Goforth, marketing director at Family Tree Farms in Reedley, CA. “People more than age 60 over-indexed in stone fruit.”

Goforth says the key to merchandising stone fruit is to be adept at reaching younger consumers, who may not browse the produce department, let alone read weekly flyers.

“I don’t think it’s just Millennials; I think we’re overstating that demographic,” he says. “You need an online presence creating a positive predisposition; you need to have an omni-channel approach. We have our merchandising done before people walk into the store.”

In addition to employing modern means of communication, it is important to convey two modern messages — the nutritional value of the fruit and the stories of the people who grow it.

“You can merchandise the health benefits and where they are coming from,” says Kyle Tisdale, marketing specialist at the South Carolina Department of Agriculture in Columbia, SC.  “Make it personal for the customer.”

The shipper should provide a merchandising campaign that augments the store’s efforts.

“Retailers need to tell their story and realize the younger generation wants to understand where their food comes from,” says Goforth. “It’s our job to help sell it, and most retailers appreciate our leadership.”

Consumers should get information on when different stone fruit varieties are most delicious.

“Some white-flesh nectarine varieties can be eaten when they’re more firm, but other varieties need to be soft to the touch when held,” advises Karen Brux, managing director of the Chilean Fresh Fruit Association, San Carlos, CA. “For varieties like the lemon plum, it starts out yellow and when it takes on a red blush, it’s ready to eat. For this variety, we’ve developed signage for retailers to use when promoting it. Since it’s called a ‘lemon plum’ there were even retailers who thought it should be eaten when yellow. Education is so important.”

LOCAL CAN BE IMPORTANT BRAND 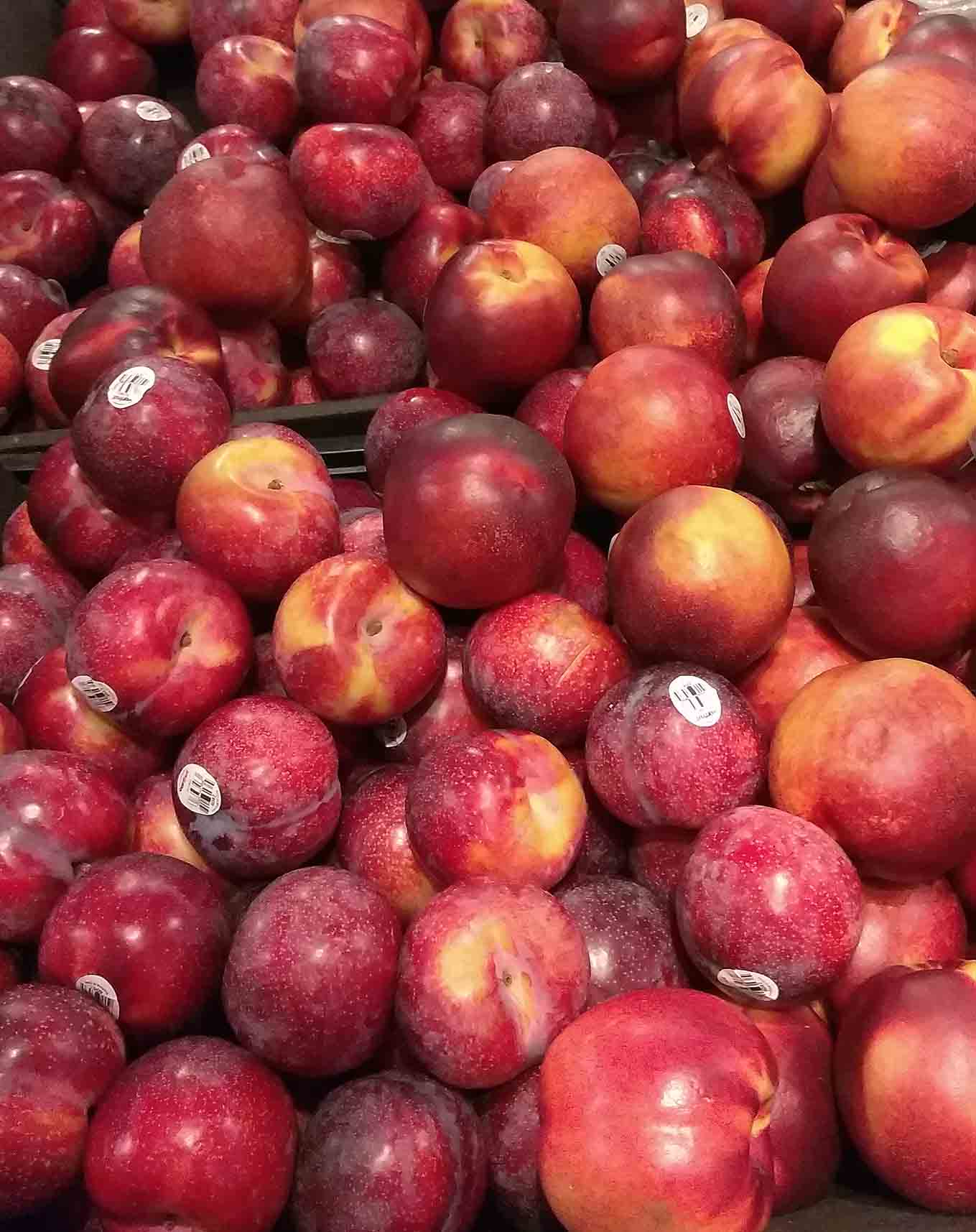 Growers in a few areas of the country have been largely immune to the decline in stone fruits because consumers still anticipate the homegrown peaches.

“I definitely think there is an advantage to promoting stone fruit by locale,” says Jeff Simonian, president of Simonian Fruit Company, Fowler, CA. “I think retailers definitely get a boost by promoting products grown in state.”

Peaches are the state fruit in South Carolina, where locals proudly harvest more than three times as much as their neighbors in Georgia, the birthplace of commercial production.

“We have seen an uptick in demand the past two years,” says Tisdale. “In South Carolina, everyone knows about South Carolina and Georgia peaches. Our season started around May 10 this year and will run into August. It’s mainly peaches. We do a few plums, but it’s mostly for farm stands and local stores.”

The South Carolina Department of Agriculture is energized about its efforts to help the state’s farmers sell their harvest, including peaches. “Most of our growers use our SC Grown program,” says Katie Pfeiffer, director of merchandising at the South Carolina Department of Agriculture. “The growers use the logo on their boxes, and the stores use it, too. Some of our growers ship all the way to Colorado.”

South Carolina is second only to California in peach production, and the state’s brand resonates throughout the country. Its peach harvest and acreage is trending up a bit.

“East of the Mississippi, in the Midwest from Chicago up to New York, and definitely in the Southeast, the South Carolina and Georgia name help,” says Tisdale.

Stone fruit is a summer treat, but there are also opportunities to merchandise counter-seasonal product as a splash of sunshine in the middle of winter.

“The peak season for Chilean stone fruit is February and March for peaches and nectarines, and February, March and April for plums,” says Brux. “With more global markets opening up for Chilean stone fruit, especially in Asia, the volumes shipped to North America have decreased slightly for peaches and more significantly for nectarines and plums. Nectarine volume has fallen by 28% between 2015/16 and 2018/19, from 2,836,000 boxes to 2,029,000.”

The Chilean Fresh Fruit Association directs all the marketing and promotional activities for the fresh fruit that’s exported from Chile to the United States and Canada.

“Sampling is key in demonstrating to consumers that they can get juicy, flavorful stone fruit in the heart of winter, courtesy of Chile,” says Brux. “Whenever we work with retailers to promote stone fruit, we generate double-digit sales increases.”

The counter-seasonal sales will never rival peaches in the summer, but it is a mistake to ignore this opportunity.

“There are still retailers who don’t even sell stone fruit in the winter, much less promote it,” says Brux. “Most consumers aren’t looking for stone fruit during the winter, so we need to work with retailers to build prominent displays in high-traffic areas of produce.”

U.S. fresh market peach imports actually have increased in sales over the past decade, according to the U.S. Department of Agriculture Economic Research Service — from $54 million to $72 million — while plum imports have gone from $36 million to $46 million.

Fresh-peach production in Chile has declined by 60 percent over the past decade, while nectarine production has dropped a more modest 20 percent, but that country remains a significant source of winter stone fruit for the United States. “The top market for Chilean peach and nectarines is the United States, where exports totaled nearly 42,000 tons and 39% of exports, but decreased by 7% over 2016-2017,” according to the Stone Fruit Annual. “The main reason for the decrease of exports to the United States is that it is a very competitive market, and prices obtained are low compared to other markets.”

Nectarines, peaches and plums are shipped out of Chile from December until March or April. 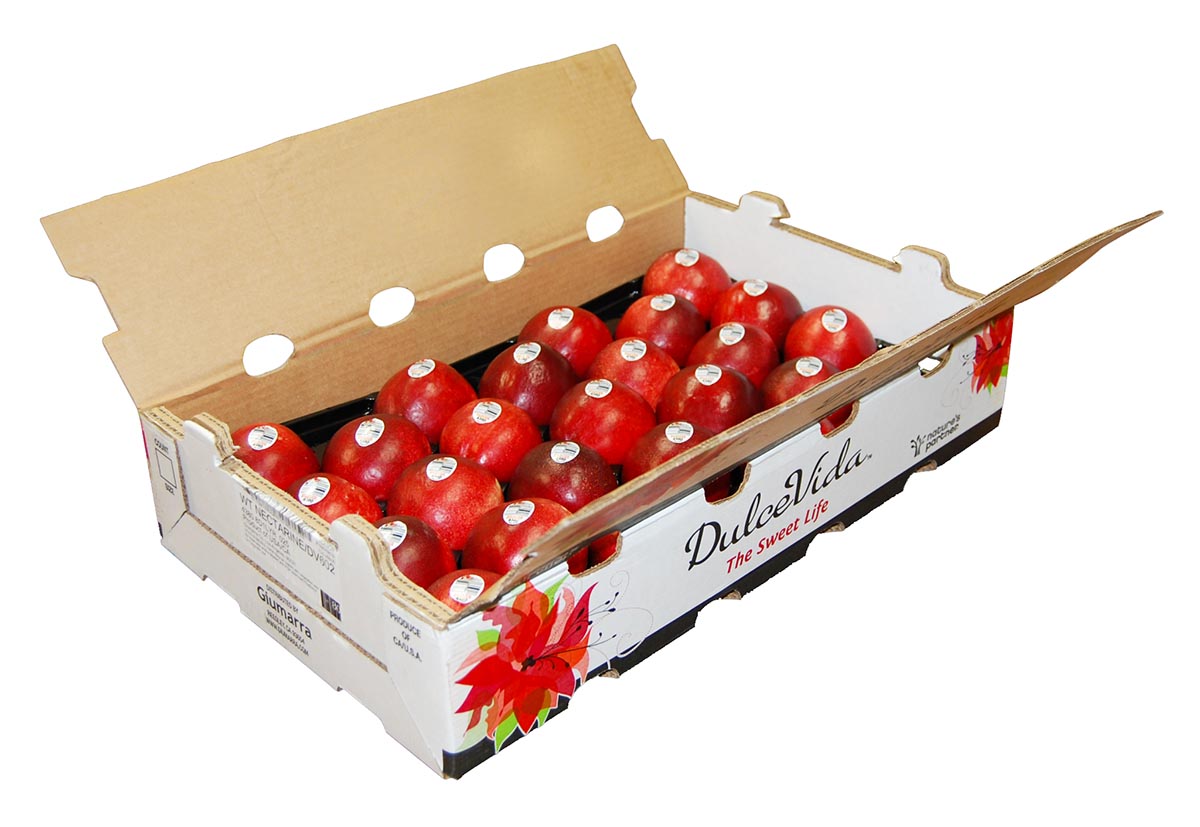 Few consumers or retailers pay attention to particular varieties of peaches, nectarines or plums, but some growers are working to change that. “Consumers are looking for flavor first and foremost, regardless of the variety,” says Jeannine Martin, director of sales for The Giumarra Companies’ Reedley, CA, division. “Younger generations are eager to understand how to experiment with stone fruit in a variety of ways, such as in smoothies, sorbets, and grilling peaches and nectarines alongside main dishes. We need to give consumers more creative ways to use stone fruit to increase sales.”

Giumarra is a produce marketing company with sales teams based on the West Coast, including the stone fruit and citrus branch in Reedley, CA, Nogales, AZ, and Mexico.

“Our growth has been in specialty varieties, such as our French-bred Nature’s Partner DulceVida yellow and white Nectarine line,” says Martin. “We’re seeing growing consumer response to our proprietary line of DulceVida white and yellow nectarines as proof of the desire for these high-flavor profile varieties.”

Although these specialties, and the seldom-found cross called the peacharine, all have very small market shares, they may be appreciated by consumers of a particular sort.

“It’s always a challenge educating consumers about what the specialty items are,” says Michael Elwinger, marketing manager for Kingsburg Orchards, Kingsburg, CA. “We offer signage and point-of-sale cards. Our job is to send the retailers information.”

Although specialty varieties take more to merchandize, the extra effort may pay off.

“We are gaining traction, especially with the pluots,” says Elwinger. “The apriums and peacharines are smaller in volume. Sampling our product is another thing we encourage the retailers to do. We have a velvet apricot with a different kind of skin. We have a black velvet apricot that looks like a plum until you taste it.”

During the winter, Redtop and Brittney Lane peaches are growing in volume out of Chile, according to Brux, as are Andesnecuno, Gardeta, Andesnectres and Luciana nectarines, and lemon plum, Black Kat, Owen T and Dapple Delight plums.

Well-developed programs both inside and outside the store can be particularly important in merchandising these lesser-known varieties.

Adds Coche Simonian, who founded Fowler, CA-based Simonian Fruit Company, which produces peaches, nectarines, apricots and plums: “There are so many varieties and variations, you almost can’t keep track of them. Yellow peaches and yellow nectarines are the biggest sellers by volume. But varieties aren’t always in season at the same time.”

It remains important to offer numerous packs of the major varieties in the peak summer months.

“Sometimes, retailers have a peach and nectarine guy, and we might be the apricot and pluot guy,” says Kingsburg Orchards’ Elwinger. “They might have as many as six SKUs of apricots and pluots in the middle of the summer; they’ll have bulk, a pouch bag and a clamshell of each kind of fruit.”

The question of how many stone fruit varieties to carry depends on the store. “Each retailer knows their customers and what they want,” says Elwinger. “Some stores have customers who want a small amount of fruit they can pick up quickly, but a Costco would have clamshells with three or four pounds.”

The optimal number of SKUs is a matter of how many pack sizes to carry. “You should have at least two or three packs in the middle of the season,” advises Pfeiffer from the South Carolina Ag Department. “Run promotions. Work with growers and the state departments of agriculture to help you do that.”

The question of how many stone fruit SKUs to display in the middle of the summer comes down to who your customers are.

Merchandising stone fruit year-round is a matter of slowing the steady decline of a venerated category of delicious and nutritious fruit.

“Our industry has less volume than it used to,” says McClardy. “It’s gone down almost a third over the past 10 years.”

The stone-fruit category faces challenges, but there are still opportunities.

“These are clearly new times, and we’d better adapt,” says Goforth. “There are a lot of other healthy options to stone fruit. We need to connect with new consumers.”