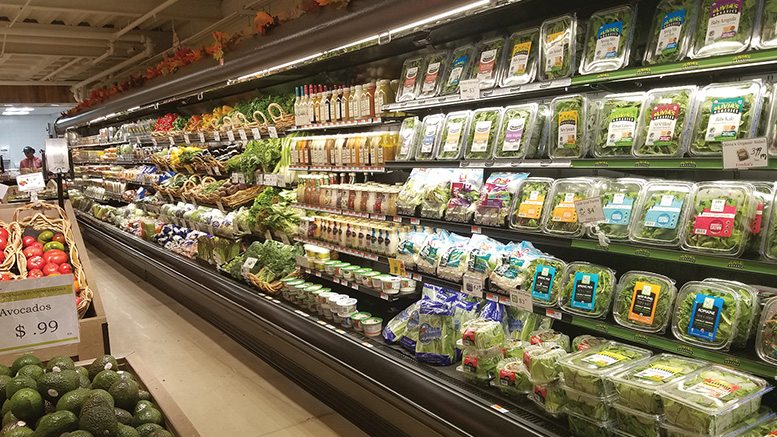 All Photos Courtesy of Foodie's Markets

Boston’s more than $13 billion supermarket industry continues to be comprised of a diverse make-up of retail stores, according to a market report from Chain Store Guide. With over 178 reported stores ranging from 60-store chains to independent gourmet shops and everything in between, Boston’s retail environment is as competitive as ever.

“The retail environment is saturated because everybody is handling produce now,” says Anthony Sharrino, president of Eaton & Eustis Co. “You have major chains such as Shaw’s (West Bridgewater, MA), Stop & Shop (Quincy, MA), and Big Y (Springfield, MA), niche retailers such as Whole Foods (Austin, TX), and a lot of independents. But then you also have non-traditional produce retailers such as Target (Minneapolis, MN) and dollar stores as well as many green grocers.”

The Chain Store Guide report indicates the market remains dominated by the three largest area retailers who control over half the marketplace: DeMoulas MarketBasket of Tewksbury, MA (with 23.3 percent marketshare); Stop & Shop of Quincy, MA (with 18.3 percent share); and Shaw’s/Star Market (with 12.7 percent share). The other 45 percent of the market is controlled by a host of retail formats including big box stores such as Walmart (Bentonville, AR), BJ’s (Westborough, MA) and Costco (Issaquah, WA), and regional strongholds Hannaford (Scarborough, ME) and Roche Bros. (Wellesley, MA).

Yet within that dynamic 45 percent operate several discreet yet consistently successful niche retailers such as Wilson Farm Inc. (in Lexington, MA), Russo’s (in Watertown, MA) and Foodie’s Markets (with four locations around the Boston area). “There is growth of the smaller niche retailer, such as Foodie’s, creating their own space in the market,” says Maurice Crafts, purchasing and sales at Coosemans.

Steven Piazza notes bigger chains are taking notice of the niche carved out by these smaller stores. “For example, Roche Bros. opened an upscale small-format store in Boston called Brothers Marketplace in an old Filenes Basement,” he says. “It’s been very successful because it’s catering to that specific neighborhood.”

In such a competitive retail environment, successful retailers offer high-quality product and educate customers, believes Victor G Leon, owner and general manager of Foodie’s Markets. “Each of our stores cater to the community they’re in. We often get customer requests for certain items and we adapt and accommodate to build our product mix based on our clientele.”

The first Foodie’s store opened in the South End neighborhood of Boston in 1998 when founder Victor J. Leon saw an opportunity for a grocery store in what was at the time an underserved neighborhood. The company, owned by Victor J. and Victor G. Leon (father and son), expanded and now encompasses four different stores around the greater Boston area with its newest opened in May 2017 in Belmont, MA.

The company strives to service each community’s unique needs. “These are not cookie-cutter stores,” says Victor G. Leon. “We carry the finest foods, and everyday favorites, at a great value. Becoming an important part of the communities we operate in and supporting the needs of those communities is what drives us.”

The newly opened Belmont store is approximately 12,000 square feet and located right in Belmont’s emerging town center. “Our smaller format makes it more convenient for customers,” says Leon. “We are careful to ensure we have just the right selection to meet the needs of our community. Convenience is crucial to people in this neighborhood.”

Leon notes the 1500 square-foot produce department is crucial to the store. “Our produce sets the tone for the entire store,” he says. “It really gives us an opportunity to differentiate ourselves and serve our specific customer segments.”

Produce’s percent contribution to overall sales in the store is approximately 20 percent. Foodie’s concentrates on offering a high quality, good mix of products. “Our main objective with produce is to provide high quality at a good value,” says Leon. “We have very high standards for sourcing.”

Almost 95 percent of Foodie’s produce comes from wholesaler Shapiro Produce of Everett, MA. “They are a great company and have been an excellent partner for us,” says Leon.

Foodie’s buys direct from some local farmers when in season and uses smaller producers to differentiate its offering. “The nice thing about being a small company is we attract a lot of smaller vendors who can’t get into the bigger retailers,” says Leon. “We have some great small suppliers that our customers really appreciate. It distinguishes us from the bigger chains.”

The appealing produce department exudes a traditional farm feel with use of baskets and vintage graphics. “We write our own price signs, using chalk board style graphics to give it a natural feel,” says Leon.

At the entrance to the department, Foodie’s boasts a nine-foot seasonal display. “We also promote items down the center of the isle and do special holiday or seasonal displays outside the store,” says Leon.

The long department is flanked by two refrigerated cases offering vegetables down the right side and fruit down the left. The right side 48-foot case highlights an array of vegetables from salads, greens and dressings to a variety of peppers, squash, cucumbers, beans and beets nestled in baskets within the refrigerated rack to emphasize the farm connection. The left side offers a multitude of bulk apples, pears and citrus to berries, cut fruit and juices, again using baskets for bulk fruit to promote a farm-fresh feel.

Island racks skirted with wooden barrels cut down the center of the two cases and display a variety of produce couplings. Banana, pineapples and mangos are paired in one island with garlic displayed in front in wooden barrels. Wooden racks provide a nostalgic nod to the presentation of potatoes and onions.

At the end of department, special sections appeal to shoppers seeking organic and health products including microgreens, wheat grass and veggie noodles. “These products are popular with our customers,” says Leon.

Foodie’s increasingly utilizes technology to reach out to shoppers. “We use social media and a weekly digital flyer in most of our stores,” say Leon. “We find most customers prefer digital communications and the need for physical flyers is diminishing. However, at Belmont we distributing a physical flyer via the local newspaper mainly because we’re new.”

A personal connection to customer and community is fundamental to Foodie’s. “We make our digital and social media communications as personal as possible using photos of employees and helping customers know what is going on in the store,” says Leon. “We also participate in local events and charities, specific to each of our locations such as Belmont’s Annual Town Celebration or Duxbury’s Opening of the Bay.”