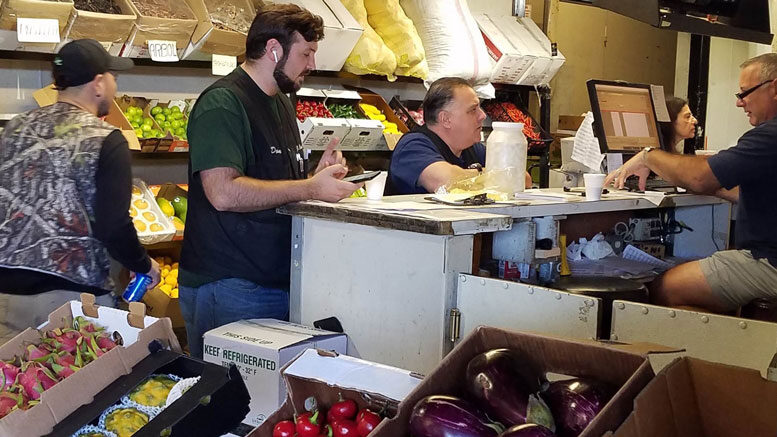 Tough times led customers to dig deeper into the benefits offered by regional and local wholesalers, such as J. Bonafede, one of the wholesalers on the New England Produce Center.

Even in turbulent times, customers rely on Boston wholesalers for consistency, availability and variety.

“The market remains very relevant for our company,” says Glenn Messinger, vice president of branch operations for Baldor Specialty Foods, including Philadelphia, Boston and Washington, DC. “Especially when product gets short and people can’t get trucks or stuff from the West Coast or we’re concerned about quality, it’s nice to have the market to go to. We can see the product before buying and it’s right down the street.”

The NEPC really is a one-stop destination when it comes to sourcing produce, says Maurice Crafts, managing partner at Coosemans Boston. “We allow the customer to buy what they need, when they need it,” he explains. “Many companies just don’t have the manpower to spread out where they source their produce from. Good service and availability is a huge benefit. We also offer Saturday service because many of our customers need us to be there when others are not.”

While the past several years took a toll on many businesses, some produce companies on and around the NEPC have been reinforced. “COVID took anybody who was marginal out of the industry because of supply chain issues and cost,” says Steven Piazza, president of Community-Suffolk. “Anybody who did survive came out stronger. We all were forced to look back, tighten expenses and get lean and mean. A lot of companies who survived became more competitive.”

Tough times led customers to dig deeper into the benefits offered by regional and local wholesalers. “Economic times are tough,” says Gene Fabio, president of J. Bonafede. “You’re always making decisions on what to do with your money. We help with the simplest things: We deliver value with every product; we provide good quality at fair prices; and we offer consistent supply. Right now, just having the product means something. You can’t sell from an empty wagon.”

Supply chain issues, driver shortages and freight prices are still challenging, Piazza says. “Everything is up price-wise including box cost and labor cost. We’re working to help our customers deal with all those things.”

The “Boston wholesale market” has historically been made up of two facilities right next to each other: the New England Produce Center (NEPC) and the Boston Terminal Market (BTM). The New England Produce Center, which opened in 1968, is the larger facility, housing approximately 38 companies. The smaller Boston Terminal Market was home to about seven companies. In 2019, the Boston Market Terminal was sold to a national developer and tenants were forced to look elsewhere to house their companies.

Several companies came over to the NEPC after the BMT closed. “Others who were at BMT also already had operations here at NEPC, too,” Crafts explains. “The market definitely seems more congested on busy mornings, which isn’t necessarily a bad thing if it’s related to new business that was brought over after the BMT closing.”

Community-Suffolk moved into a new off-market facility in early 2021. “We have 12,000 square feet right across the street from the market,” says Piazza. “We took about six months during the pandemic to renovate everything, including the electricity and coolers. We managed to make such efficiencies that we’re doing the exact same volume in this facility as in our older one, which was twice as big.”

Piazza explains the size of Community-Suffolk’s new building means they’re managing more mixed loads. “This has forced us to be better buyers and keeps us fresher because of multiple arrivals,” he says. “Also, staggering the arrival and departure of help and working split weeks has been beneficial. We have more flexibility since we’re not under the rules and regulations of the co-op.”

Community-Suffolk also still maintains three bays in the NEPC. “We need the flexibility of having some space there, too,” says Piazza. “This combination gives us options. We try to be at our off-market facility a little earlier than the NEPC opens so we can be first pick-up for customers. We have their orders ready and staged on the floor. The drivers can load quickly here first, then head over to the market. We’re looking to benefit customers through our efficiency.”

Baldor opened its 100,000 square-foot facility in Chelsea, MA, in April 2019 and has continued to operate from it. “The building enables us to continue to service our customer well,” says Messinger. “It’s functioning and serving our customers exactly how we envisioned, and we continue to grow. Right now, we probably have 150 people working in that facility.”

Boston-area wholesalers tout reliable supply as one of the major benefits for doing business with them. “There is more focus on consistency and quality,” says Cerasuolo’s Cavallaro. “We focus on keeping things fresh and making sure we’re giving our customers consistent top quality. Our customers know they can get what they need here, day in and day out.”

Messinger partly credits Baldor’s bustling business to providing consistent service even during turbulent times. “Our customers know they can serve the same great product at their restaurants regardless,” he says. “We have an advantage in that we’re not married to just one terminal market. We can source from Boston, for example, if we can’t get it in New York. If we’re short in New York, we can load 60 pallets of something from Boston and ship it down. There are times when the Boston market is serving New York and even Philly, too.”

Relationships with shippers play a big role in a wholesaler’s ability to maintain product. “We stay consistent with our shippers,” says Cavallaro. “We’re taking product during both good and bad times. They stick with us through good and bad and we stick with them. So, we have product when times are tight.”

Piazza explains the importance of preparing ahead to ensure consistency and quality. “We try to quote most of our customers at least a week in advance, so it gives them initiative to give us the order in advance,” he says. “Then, when they do pick up, the order is staged and ready. And, we’re doing business with the same shippers over and over again, so when product is tight, we’re never without our base product line.”

Consistent local availability helps mitigate risk. Crafts believes the shutdowns related to the pandemic definitely spooked some foodservice customers big enough to do a lot of direct buying. “Many got hurt when they were stuck with a warehouse full of produce they would no longer need,” he says. “I suspect we have seen some increased action from customers who would rather buy it as they need it, as opposed to speculating and sitting on a bunch of product.”

Labor is another driver. Garden Fresh Salad Co. is of particular help, since businesses are so short on labor and they don’t have the people to cut or prep product at store level, says Patrick Burke, co-owner. “We provide the labor and convenience for our customers. It saves them time, money and frustration.”

Customers look to the market wholesalers to meet a variety of needs. “Over the years, we’ve added products to our line based on demand from the traders,” says Bonafede’s Butch Fabio. “We’ve always been strong in bananas, pineapples and mangos, but over time we’ve added more. If customers have an item they’re interested in buying, we look into it and carry it to satisfy increasing demands.”

Travers Fruit offers a wide variety of products. “Depending on the season, our daily inventory consists of apples, pears, cherries, kiwi, all grapes, all berries, organic products, onions, watermelons, honeydews, carrots, bok choy, avocados, asparagus, and many other products,” says Paul Travers, co-owner at Travers Fruit Co. “We have in excess of 75 products.”

Bonafede carries some unique items such as dragon fruit and cactus pears because of customer requests. “We have yellow dragon fruit in addition to the red,” says Butch Fabio. “It’s an item that’s become an added interest. We also sell a lot of cactus pears and we recently discovered a yellow cactus pear.”

John Cerasuolo Co. has a new line of western veg, and hired Mike Donahue in September 2021 to sell the company’s western veg line, says Cavallaro. “Customers have responded really well to the line. We’ve always sold some western veg, but Mike came on with a lot of new products to expand the line.”

Processor Garden Fresh has also added a few new items to its lines. “We’re doing a power blend with kale and also a lot of shaved and halved Brussels sprouts,” says Burke.

As the marketplace gets tougher, customers rely on wholesale experience. “The costs of diesel fuel, transportation, labor and materials have seen significant increases this season,” says Travers. “The industry is experiencing very volatile markets. We continue to deal with the very best shippers and growers so we can offer excellent quality products, service and many customer-friendly promotions to help.”

Piazza and his team at Community-Suffolk strive to be the best they can in the items they provide 52 weeks a year. “Customers can get the best price here for the best product in the market because we have 50+ year relationships with our suppliers,” he says. “Since COVID, everyone is more conservative in projections of volume and risk taking. Because of the cost of goods, cost of transport and cost of labor the industry’s margins are very tight. The upside is a very small percent and the downside is very expensive.”

Companies on and off the market also rely on each other’s expertise. “It’s still important for wholesalers to buy and sell each other,” says Bonafede’s Gene Fabio. “We support each other to find items we need but don’t want to bring in ourselves.”

Everybody knows each other here, agrees Cavallaro. “Though we’re all competition, we also work together,” he says. “There are relationships we’ve established over the years and those still stand strong.”

Burke emphasizes there has always been mutual support of businesses at the market. “At the end of the day, we’re all in the same boat,” he says. “It’s a culture here that’s unique. It’s all about getting the job done.”

Boston wholesalers move into the future with new hires and promotions.

Over the past few years, Boston wholesalers have expanded business through personnel changes.

Nearly a year ago, Community-Suffolk hired Christian Demato for assistant potato sales, helping with a full line of potatoes from all growing areas. “It’s a position we added to help with the volume in potato sales,” says Steven Piazza, president. “He came to us with previous experience in the industry from one of our wholesale customers.”

Community-Suffolk also promoted Victor Pavo to head of broccoli and celery sales. “He moved into this position after being mentored by Ronny Dugas,” says Piazza. “Ronny worked for us for 40 years and retired, but he’s continuing to work virtually and mentor Victor.”

Garden Fresh Salad Co. celebrates the official hiring of third generation Michael Burke, who started full-time in June 2022 after graduating college, but has been working summers at the company for years. “He does just about everything from sales to prepping orders,” says Patrick Burke, co-owner. “It’s great to see the next generation coming into the business. We have quite a few of the third generation working at the company currently, including Brendan Whitney, Adam Feld and Ben Czuchra.”

Michael Burke explains he is motivated by the family aspect of the business, and working with customers “and making their day better,” he says. “My philosophy is to always put the customer first. Whatever they need done, I try to cater to their needs.”