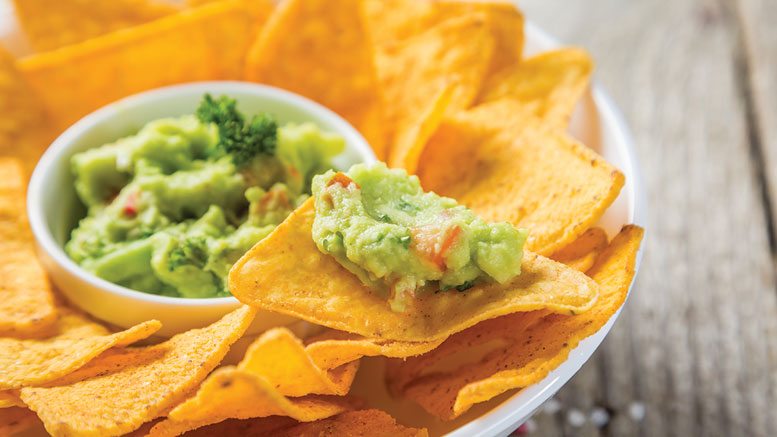 Use convenient, health attributes to drive sales and consumption. 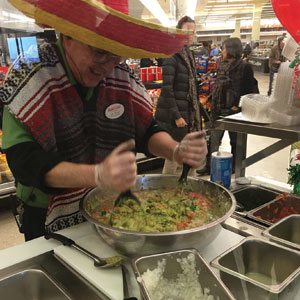 Photo Courtesy of
Avocados From Mexico At Jewel-Osco

Start with a 700-year-old recipe first concocted by the ancient Aztecs in 14th century Mexico. Then, add America’s insatiable demand for avocados, which has seen per capita consumption grow from 3.2 pounds in 2004 to 7.0 pounds in 2014, according to the USDA’s Economic Research Service. Finally, stir in shoppers’ need for convenience, a trend the NPD Group identified last year from its Eating Patterns in America data, which showed while consumers value fresh and authentic foods, convenience remains important.

This is a recipe that has fueled the rapid expansion of prepared guacamole in retail produce departments. After all, per a 2015 usage segmentation study by Avocados from Mexico, an Irving, TX-based marketing group, guacamole is the most frequent form in which avocados are eaten in the United States.

“Guacamole is a good-selling item in produce,” says Richard Stiles, director of produce and floral for Redner’s Markets, a Reading, PA-chain with 44 markets and 13 Quick Shoppes in Pennsylvania, Maryland and Delaware.

Retail sales of prepared guacamole increased 22 percent in 2016 to $65 million in annual sales, according to statistics provided by the Nielsen Perishables Group, Chicago. However, while this product represents a very small portion of total produce sales, it did contribute to 4.6 percent of avocado category dollars last year.

First, “Inconsistency in the quality of fresh avocados has helped the expansion of prepared guacamole,” says Jessica Brown, director of marketing for Yucatan Foods L.P., in Los Angeles, which markets its product under the Cabo Fresh brand.

Redner’s’ Stiles agrees. “Prepared guacamole takes the guesswork out of knowing when avocados are ripe.”

“While the growth of the Hispanic population in the United States is a key factor in increasing demand for guacamole, the target audience for prepared guacamole skews toward higher income, college educated consumers.”

Jim Garsow, vice president of marketing for the Pleasant Prairie, WI-based Good Foods Group LLC, agrees. “While the growth of the Hispanic population in the United States is a key factor in increasing demand for guacamole, the target audience for prepared guacamole skews toward higher income, college educated consumers. Caucasians, age 25 to 44, are the health-conscious consumers. This shopper group is interested in fresh, nutritious prepared foods, with simple, clean, real ingredients, no preservatives and ready-to-eat convenience.” 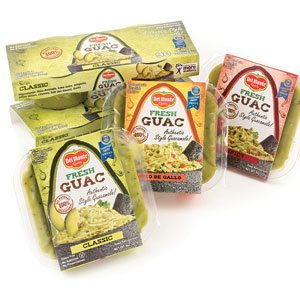 The advent of High Pressure Processing (HPP), a pasteurization method that uses extremely high water pressure rather than heat to kill potential food-borne bacteria, has enabled manufacturers to produce fresh guacamole products. Since there is no high temperature used, there is virtually no change in product taste, texture or nutrient content. Most importantly for guacamole, HPP halts browning. Fresherized Foods, headquartered in Saginaw, TX, and a subsidiary of MegaMex Foods LLC, was among the first to commercialize the HPP technology more than 20 years ago. Today, the company markets its prepared guacamole under the Wholly Guacamole brand.

“Albertsons was our first retail customer, then Wal-Mart and Safeway, and the product took off,” says Jay Alley, vice president of retail sales.

Today, several companies offer prepared guacamole products for sale at retail. These products have a shelf-life from date of pack that ranges from 30 to 90 days.

The newest flavor introduced by Good Foods Group is Spicy Guacamole, a combination of jalapeno, serrano and black pepper.

“These add adventure and complexity to regular guacamole — just what Millennial customers are looking for,” says Alley. 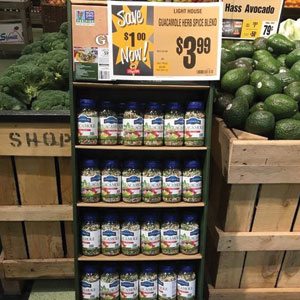 Each retailer has its own destination for guacamole. Some display in the deli with other dips, others in the meat department as a burger, burrito or fajita topping, while others build a category in the produce department next to refrigerated dips and dressings, as well as snack and value-added veggies.

“We have an 8-foot snack section in produce where we display items like mini carrots, celery hearts, Mann’s pre-cut vegetables and dips like salsa and guacamole,” says Redner’s Stiles. “As for the guacamole, we offer five different types of manufacturer-made and our own in-store prepared. Aside from flavor, the best-sellers are the large package sizes.”

Retailers are often trying to minimize the labor component in operations and for this reason Good Foods Group launched a clear 13-ounce tub with minimal labeling. “This is the perfect solution for the ‘fresh-packed’ experience without risk or cost. On the other hand, one of our best-sellers is our 2.5-ounce individual single serve size. This item is available in a 4-pack or 50-count bulk case for foodservice and individual sales,” says Kristyn Lawson, vice president of retail sales.

To accommodate the variety of products available and a broad range of customer demand, Fresherized Foods’ Alley suggests retailers create a 4-foot guacamole set in the produce department. “Offer two to three SKUs of 8-ounce packs, four to five SKUs of minis, two to three SKUs of 10-ouncers and either a store-made or specialty flavor like Hatch chili. If you only offer one to two SKUs, the product will get lost on the shelf,” he says.

Few people eat guacamole straight off a spoon and with nothing else, says Will Burger, director of marketing for Hope Foods, Louisville, CO. “Therefore, it’s important for retailers to build bridges or call out all the ways it can be used.”

Del Monte’s Christou agrees. “Cross-promoting guacamole with chips, salads, sushi and vegetables such as celery, carrots and broccoli are great ways to increase sales and gain consumer acknowledgment. Signage should always inform consumers about the different usage options and occasions for the product, and recipe cards can be placed directly next to the product to drive sales,” he says.

Additionally, “Retailers can raise the visibility of their prepared guacamole by pairing it with other complementary items on display for quick and easy snack or meal solutions, and also promoting it in ads,” says Good Foods Group’s Garsow. 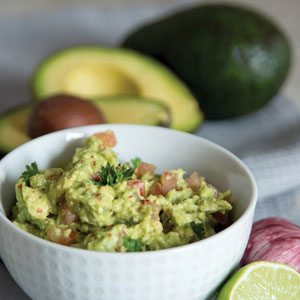 Beyond day-to-day use, “we’ve seen that holidays and events are key drivers for increased guacamole demand, as it’s a quick and easy dish that’s also a crowd pleaser,” says Theresa Lindholm, assistant brand manager at Sandpoint, ID-headquartered Litehouse Foods, which introduced its Guacamole Herb Blend in 2016. For example, Americans consumed 8 million pounds of guacamole for Super Bowl 2016, according to the California Avocado Commission.

Football season is a big time for guacamole sales. “That’s because men prefer to buy the product pre-made while women usually like to make their own,” says Redner’s’ Stiles.

Retailers can best market to this audience by running various print and digital ads during peak season and sporting events, setting up relevant in-store promotions and promoting use on social media, suggests Del Monte’s Christou.

The popularity of guacamole has led many retailers nationwide to make this creamy green dip in-store, according to Robb Bertels, vice president of marketing for Mission Produce Inc., in Oxnard, CA. “Some use fruit that is over-ripe from their displays for guac prep, while others have a more robust program where they source fruit specifically.”

One of these is Northgate Markets, a 41-store Hispanic retailer based in Anaheim, CA.

“Two years ago, in one store we tested making guacamole fresh on the sales floor and sampling it to customers,” says Produce Director Alfonso Cano. “The success of this type of action station follows the trend we see in restaurant chains like Chipotle and Subway of enabling consumers to customize. We can make it spicy, medium or mild — just the way they want it.”

Cano says that the in-store guacamole program is part of Northgate’s “Our Mexican Kitchen” or prepared foods department rather than produce. However, these action stations, placed in high-traffic areas, are surrounded by displays — ranging in size from 2-by-2 to 4-by-4 — of fresh produce items such as tomatoes, cilantro and avocados.

“There are always those customers who want to make guacamole from scratch. However, premade guacamole is an impulse purchase and a way to introduce the product to a new generation. This ultimately increases our overall sales of avocados since we pre-ripen the fruit and deliver to both departments of our stores.”

At Redner’s Markets, a Reading, PA-chain with 44 stores and 13 Quick Shoppes in Pennsylvania, Maryland and Delaware, employees make guacamole fresh in the deli daily and also sell it in the produce department, according to Richard Stiles, director of produce and floral.

In the Midwest, Jewel-Osco held a highly successful in-store avocado merchandising program in December 2016 through February 2017 for the Big Game season. The Chicago-based retailer, which operates 186 stores in Illinois, Indiana and Iowa and is one of the Boise, ID-based Albertsons Companies, worked with the Irving, TX-based marketing group, Avocados from Mexico (AFM), on the program.

A big focus of the merchandising effort was focused on creating an in-store theater by bringing fresh-made guacamole out from the back room. The new refrigerated guacamole stations used for the program are now being tested in 17 Chicago-area stores. AFM is collaborating with CSSI, a Chicago-based Fresh Food Culinary Innovation Group, to develop a complete program that retailers will be able to follow from recipe to execution. The program will be ready to launch in September 2017.

Other companies can also assist retailers in setting up an in-store-made guac program. For example, in the past five years, Concord Foods has provided its dry mix in bulk to retailers interested in developing a turnkey store made guacamole program.

“Using our mix allows retailers to have an easy-to-make and repeat recipe which ensures consistency from store to store,” says Samantha McCaul, marketing manager for the Brockton, MA-based company. “Since 2014, sales of our mix have grown 73 percent.”