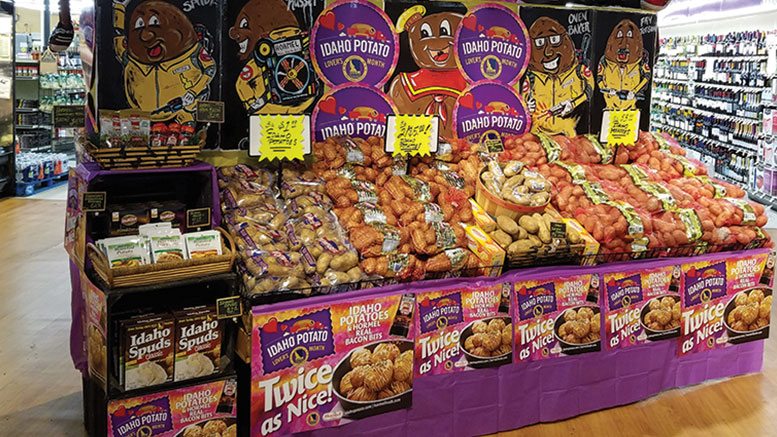 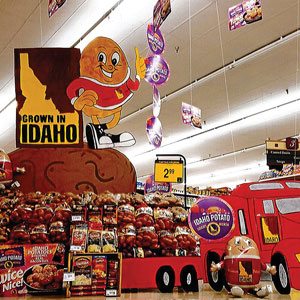 This year’s contest, which drew more than 5,000 submissions from retailers across the country, featured a prize for the winners of each category. Each of the top six winners in the Idaho retail display contest won an all-expense paid Caribbean cruise for two on Celebrity Cruises. Second- to fifth-place winners were awarded cash prizes. Everyone who entered the contest received a Marley Chant Mini Portable Bluetooth audio speaker system.

Each in-store display was required to incorporate clearly marked fresh Idaho potatoes (bag, bulk or both), an Idaho dehydrated potato product and Hormel Real Bacon Bits, plus IPC point-of-sale materials, including Potato Lover’s Month logo display signs and inflatable mylar Spuddy Buddy balloons. Retailers had to showcase the display in their store’s produce section for at least one week between Jan. 16 and March 17, 2017.

Through the Category Manager Match program, any prize awarded to a particular retail worker was awarded to his or her manager. “We do this so we can get support from the produce managers, as well as from the top. Their bosses encourage them to enter because they also win the same prizes,” says Jamie Bowen, IPC’s marketing manager.

Bowen, so that “the little stores don’t have to compete with the big stores.”

This year’s first place display in the 1-5 cash registers category was created by William Roller, a produce clerk at 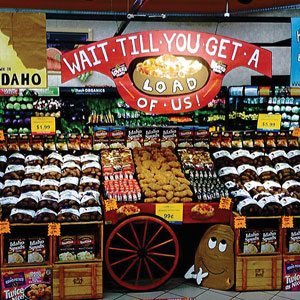 Community Market in Greenfield, OH. The display was Ghostbusters-themed and featured large, hand-drawn potato cartoons outfitted in the film’s signature regalia. Roller says he tapped into the whimsy of his childhood as a source of inspiration.

Greenfield is a village of less than 4,000, and Roller says the contest has become an exciting fixture for residents of the agriculture-oriented Ohio municipality. “People now have grown to look for it,” says Roller. “We’re a meat-and-potatoes kind of place. It’s a rural county, and we love our spuds.”

Other first-place winners included Julie Bolton, Kroger, Elkhart, IN, in the 6-9 registers and David Scarlett, KVAT Food Stores, Knoxville, TN, in the 10+ registers.

PRODUCE BUSINESS congratulates the retailers who received top honors in each category. We applaud the IPC’s ongoing initiative to engage retailers and consumers alike in this creative celebration of the Idaho potato.