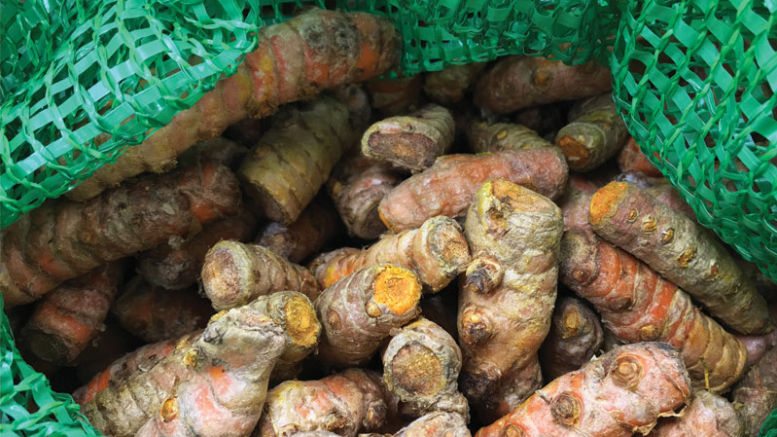 The root with its tantalizing scent and entrancing color is bringing a unique edge to produce departments.

Native to India, turmeric is an ancient ingredient cherished for providing its mouth-watering yellow hue in dishes like curry and for its healing properties in Ayurvedic medicine. More recently, this spice played the mundane role of enhancing the color of processed foods such as cheeses, salad dressings, butter, chicken broth and prepared mustard. 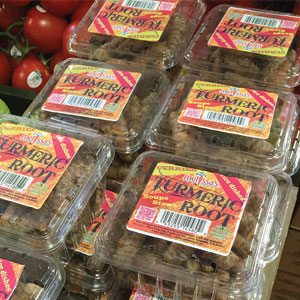 Today, it’s the fresh form of this root that has shot to fame as a superfood. Turmeric is getting big play at retail, but other than in juice bars is “hardly showing up on restaurant menus … yet,” according to Baum + Whiteman, LLC, a Brooklyn, NY-based food and restaurant consulting firm that named turmeric the ‘spice of the year’ in its report, 11 Hottest Food & Beverage Trends in Restaurants and Hotel Dining for 2016.

“We have carried turmeric for more than 20 years, but with limited availability and distribution,” explains Robert Schueller, director of public relations for Melissa’s/World Variety Produce, in Los Angeles. “The trend really started in the past two years — especially when the fresh root became more widely available. Since then, the trend is driven by use in juicing and nutritional information about the root, increased popularity of Indian cuisine in the marketplace, and chefs using it more on the menu.”

What Is It & What to Do With It

Turmeric is a member of the ginger family, with a taste that James Macek, president of Coosemans-Denver, Inc. and partner in Coosemans Worldwide, describes as orange and ginger, with bitter, earthy undertones. Coosemans-Denver featured turmeric in its February 2015-published Garden Party newsletter for foodservice distributors.

“Widely used in India, Pakistan and thereabouts for centuries, it is consumed in its dried/powdered form and used to season vegetables, lentils and curries,” says Macek. “As you move west, the Asian population prefers the fresh product over the dried, and this is the case in the U.S. as well, based on the current culinary interest it is receiving. Its appeal is its brilliant color. In my opinion, it’s best when grated and tossed into stir-fry or added in the last few minutes to a vegetable sauté. It makes a nice tea, too. Peel, grate and steep in hot water, then serve with honey and lemon.”

Turmeric’s widely reported health benefits lie in its natural abundance of curcumin. According to scientific studies, this phytonutrient is full of antioxidant and anti-inflammatory properties that can help to prevent and treat chronic ills like cancer, diabetes and cardiovascular disease.

Get It While it’s Hot! 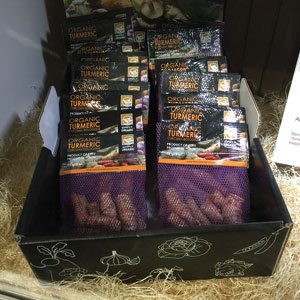 “India is the major producing country for turmeric, but it’s logistically easier as well as fresher and less costly for us to fly it in from Peru,” says Davis Yung, president of Fresh Direct Produce Ltd., in Vancouver, BC. “It’s too perishable, and there’s not enough volume yet to bring turmeric in by sea containers. We work with two or three organic farms and bring it in in 30-pound bulk cartons. For retail, we have 5-pound boxes for bulk merchandising or prepackaged 3-ounce bags that we sell under our Simply Organic brand. It’s best to store turmeric in a dry cool place away from sunlight so it doesn’t lose its aroma, flavor and pungency. It also becomes less pungent if stored in refrigeration.”

Thomas Fresh, based in Surrey, BC, preferentially sources fair-trade turmeric from Peru, according to brand manager Jason Tubman. “Turmeric can be pricey; right up there with ginger. For example, a 3-ounce bag can retail for $3.99 to $4.49 based on the market as well as if it’s fair trade or not, organic or conventional.”

One retailer that carries fresh turmeric root is Bristol Farms, a 12-store chain based in Carson, CA. “Although the spice’s powdered and fresh root forms have most of the same properties, I think the root form is a little more popular because it’s fresh and is what organic shoppers tend to lean toward. We carry turmeric in bulk root form and prefer it to be organic. It seems our organic customers consistently buy it more than our conventional shoppers,” explains produce director, John Savidan.

Recipes often call for both fresh turmeric and fresh ginger together, so retailers should merchandise turmeric and ginger roots together, recommends president and chief executive of Frieda’s, Karen Caplan, whose company sells turmeric in bulk as well as 6-ounce and 8-ounce clamshells. “Juicing sections are also a magnet for health-conscious consumers and a great place to feature turmeric, along with other juicing favorites like kale and young coconut.”

Another suggestion, from Thomas Fresh’s Tubman, is to display turmeric near other seasonings such as peeled garlic, shallots and fresh herbs.

Education is critical to turmeric sales at retail. “If consumers don’t know what it is or what to do with it, they won’t pick it up,” says Amy Myrdal Miller, MS, RDN, FAND, founder and president of Farmer’s Daughter Consulting, Inc., based in Carmichael, CA. “Incorporate signage into the display with short bullet points about turmeric and its uses. Or have a copy of a food magazine open to a recipe using fresh turmeric.”

Ethnic condiments and spices, which include curry, rated as the No. 1 global flavor trend in the National Restaurant Association’s What’s Hot 2016 Culinary Forecast, with 71 percent of the nearly 1,600 chef members of the American Culinary Federation surveyed labeling this item a hot trend.

Many chefs are experimenting with fresh turmeric in non-traditional ways. For example, Fall Pumpkin Bisque, a silky soup served with a twist of ingredients such as as chicken confit, crispy chicken skin, heirloom apples and turmeric, was featured on the October 2015 menu at The Kitchen Restaurant in Sacramento, CA, a semi-finalist for the James Beard ‘Outstanding Restaurant’ Award.

“It may be awhile before we see fresh turmeric used on the chain restaurant side. This is due to cost, the need for knife skills, and its labor intensiveness. In the future too, while Indian cuisine isn’t mainstream, it is something that appeals to Millennials who are looking for more plant-based, vegetarian or vegan, sustainable dining options,” says Myrdal Miller.

Turmeric is what puts the bright yellow in prepared mustard and curried rice. Unfortunately, this golden hue can leave a doozie of a stain on hands, clothing and kitchen surfaces when the root is cut exposing its moist bright interior. Here are a few ways to remove stains.

Hands and Nails: Make a scrub by mixing together a few tablespoons of granulated sugar with a few drops of olive oil. Rub on hands; then rinse well. Clean finger nails with a stain-ridding blend of baking soda moistened with a couple droplets of lemon juice.

Clothing: “The key is to begin treating as soon as possible to reduce absorption,” says Miki Hackney, chef at Melissa’s/World Variety Produce, in Los Angeles. “Remove any mass of the product by scooping up or picking off of the surface. Blot, do not rub, as this will only spread and deepen the stain. Wash in cold water only. Warm and hot water will set a stain.”

Kitchen Surfaces: The folks at Frieda’s, a specialty food supplier in Los Alamitos, CA, suggest two methods to remove stains from counters, cutting boards and containers on the company’s website.

The first is to make a paste with baking soda and a few drops of water. Apply this mixture generously around the stained area. Let sit for 15 minutes, then scrub well and rinse
thoroughly.

Second, combine half a tablespoon of bleach or distilled vinegar with 1 cup of water. Soak containers in this solution for 30 minutes; then rinse thoroughly.

“Stains only happen when the turmeric is cut open, so there are no worries about stains when setting a bulk display in the produce department,” says Robert Schueller, Melissa’s director of public relations.