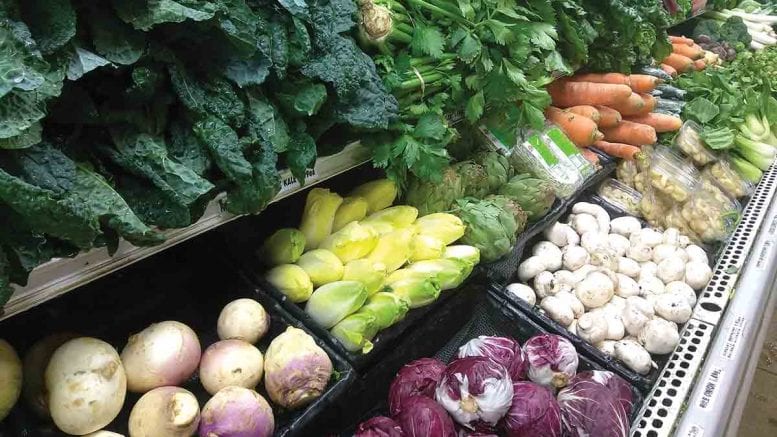 Spoiler alert: Southerners do, indeed, love their Southern vegetables. But that lovefest extends far beyond the borders of those rich and warm produce states.

Jeff Cady, director of produce and floral for Tops Friendly Markets, says Southern vegetables appeal to everyone, including his customers in the Buffalo, NY, area.

“There are so many products that come from the South that people like to eat — vegetables like corn, peppers, squash, cucumbers and eggplant,” Cady says. “We’ve been partners with Fresh from Florida for quite a few years, so we really [pursue that avenue in ads and displays]. Everyone knows where Florida is — especially in January — and you don’t grow Southern vegetables in Buffalo in the winter.”

That said, customers who live in the South really eat up those vegetables, too, and in large quantities.

“Vegetables are a staple to every Southern meal,” says Lauren Dees, sales and marketing manager at Vidalia, GA-based Generation Farms, which recently was acquired by Grimmway Farms. “If you’ve been lucky enough to enjoy a Sunday dinner in the South — you know we’ve found just about every way to fry, grill or bake every vegetable there is.”

Charles Hall, executive director for the Georgia Fruit and Vegetable Grower Association, La Grange, GA, agrees. “I think Southerners are some of our largest consumers. They’re going to be eating locally grown products, including produce; they’re looking for a regional type of fruit and vegetable.”

That includes certain staple items at everyday and holiday meals in the South.

“North Carolina’s climate and soil are the perfect mix to grow some of the best sweet potatoes,” says Tami Long, director of marketing and business development at Nash Produce Distributions in Nashville, NC.

One of the hottest trends in produce — and in most parts of the U.S. — has been the increasing interest in organic. And Southern growers are ready and willing to accommodate.

“We’re seeing more growers going to organic production methods because retailers are asking for more of those products to be grown organically,” says Hall. “Lots of times, a retailer that a grower has been selling to for many years may say they need organic cucumbers, so the grower will put in a couple of acres of organic cucumbers to meet the request.”

Whether enjoyed by consumers in the South or shipped to other states, Southern vegetables continue to find a strong home and place in retail displays across a large portion of the country.

Cady has had particularly good success with pairing Southern vegetables and other non-produce items.

“Generally, we cross-merchandise with protein,” he says. “We display in the meat department and move items like squash, eggplants and peppers near pasta, or where it provides solutions for consumers.”

Roberts says his stores cross-merchandise with green beans and red potatoes. “Everything from the South or Southeast is grouped together in the same location.”

The Defense Commissary Agency, headquarted in Fort Lee, VA, touts produce from the South, with stores often posting signage of the grower’s farm and location, according to Bridget Bennett, category manager for produce.

Dees says programs such as Fresh from Florida and Georgia Grown also have “done an excellent job” providing resources for retailers to market a local program in their stores. “Displays along with photos and stories from the farm creates a personal connection for consumers,” she says.

THEY CAN WITHSTAND THE HEAT

Before vegetables even hit the shelves, shipping is a big consideration.

Because the produce season can be a lucrative time for carriers, some companies will reposition their assets to produce-heavy Southern states, where demand is higher. As a result, even shippers in non-produce-heavy regions are impacted by capacity shortages and higher rates.

Georgia fruit and vegetable growers ship about 70% of their products into the Midwest, Canada and the East Coast, including the New York/New Jersey area, notes Hall.

“You probably add another two days; a day and a half, at least, if you’ve got shipping into the Midwest from California, so you’re looking at a much faster turnaround and a much faster product on the shelf for items coming out of the Southeast if you’re shipping into Chicago,” he says.

Meanwhile, Nash Produce ships sweet potatoes throughout the United States, Canada, Mexico and the United Kingdom. With that in mind, shelf life is significantly linked to the vegetable itself, says Long.

“Sweet potatoes are a very hearty vegetable,” she says. “As soon as they’re harvested, they’re transferred to a curing room, where they remain for several days in an 80- to 85-degree room that maintains a 90-95% humidity level. The curing process toughens the skin and brings out the sweetness of the vegetable,” says Long.

The sweet potatoes are then transferred to a storage building, where the temperature is fixed at 55-60 degrees. Sweet potatoes, she notes, can remain in storage for up to 18 months. They’re removed from storage, cleaned, sorted, packed and shipped only when an order comes in. If kept in a cool, dry area, sweet potatoes last up to 21 days, says Long, who emphasizes they shouldn’t be refrigerated, or they’ll go bad faster.

“Sweet potatoes have experienced extremely low pricing these past few years, so farmers weren’t making money on this crop,” she says. Consequently, many opted not to plant in 2017 and 2018. Overall, acreage is down for sweet potatoes. “I find it hard to believe that consumers are willing to spend more than $1,000 on a cell phone, but not an extra $0.10 per pound on produce.”

To help offset expenses, Roberts at Harps says his stores actively pursue as much business on vegetables as they can with growers in the Southeast. “We’ve built relationships with, and try to use, [growers like them] as much as we can; it saves on freight, and you can get it here quicker, which makes it a little fresher.”

Then there are variables, such as the heat, that can breathe down the necks of Southern growers, potentially impacting the production and harvesting of crops, notes Hall. Bearing that in mind, “many growers harvest in the morning, pack in the afternoon and the trucks are here late afternoon to start picking up products that were on the vine and harvested that morning,” he explains. “You’re trying to get trucks in as quickly as possible.”

Atlhough Long also says heat is a significant challenge in the South, with sweet potatoes, you can get by. “They’re grown in the summer and harvested in the fall, but as long as there’s not a significant drought, sweet potatoes can handle the heat.”