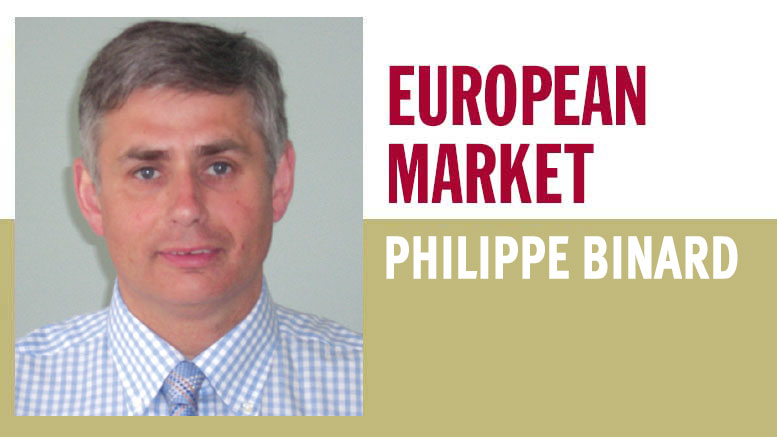 As we prepare for the London Produce Show and Conference this year, we wanted to update our readers to some of the priorities Freshfel is emphasizing. We asked Pundit Investigator and Special Projects Editor, Mira Slott, to find out more from Philippe Binard, general delegate for Freshfel Europe. We started our conversation with Binard last month, and pick it up again here:

Q: Turning to sustainability, Freshfel urges the sector to build on the environmental, climate and health benefits of a plant-based diet to reach the goal of 400 grams/capita/day. Yet, increasing produce consumption often intersects with sustainability policies. Freshfel raised supply chain concerns because of the French ban on plastic packaging of certain fruit and vegetables taking effect Jan. 1, 2022, with a timetable for full compliance of others. Could you discuss these impacts?

A: Sustainability in the fruit and vegetable sector started a long time ago. There’s been the unification of the agriculture practice through certifications schemes, like GLOBALG.A.P. that was already 20 years ago.

For the moment, we are embarking into a project with the objective of setting up a methodology, collecting the data that will help us to measure the environmental footprint of the fruit and vegetable sector. It’s important that the methodologies would be the same; this aspect is complex because each of the products, each of the varieties, depending on its growing condition, might be different. But I think very soon, if the sector is not doing it, it will become compulsory by legislation.

Q: How do you reconcile this with the French ban on plastic packaging for certain fruit and vegetables?

A: We don’t have any opposition to reduce the use of plastic. It’s just that this French rule has a number of problems. First, if one market is going with its own rule, it is breaching the freedom of moving the product from one country to the other inside the European Union.

Within a big market like the U.S. market and the European markets, it will be important that the rules be Pan European. The French went their own way, and now they’re launching new labeling requirements and the recyclability of the packaging materials that you use. All of that creates unnecessary added costs, and it will be better to go all in the same direction within the whole single markets of the European Union.

Q: The rule appears inconsistent, exempting certain products from compliance with the regulations, at least for now. How does that work?

A: This is a critical point. Frozen products that are packed in plastic bags can continue to be sold. They don’t report the same restrictions there. Or this bottle of plastic for Coca-Cola or for water or for orange juice or whatever, this is not banned, and a lot of other secondary packaging on the shelves of supermarkets are not removed. The rule discriminates and imposes the tough conditions on the produce sector, which is probably one of the sectors that has done most to contribute to the solution.

The other problem with the French rule was the fast track imposed for introducing this ban on plastic. It didn’t give the sector time to find a solution.

France is also banning some of the stickers on fruit and vegetables. But they didn’t consider that if you have a product that has the sticker being affixed in Belgium or in New Zealand, they can sell on the French market. The law is actually to the benefit of products that come from other countries. It harms the French grower when they want to export to Germany, because they cannot affix the sticker in France, even if they export to another market.

Q: Where does produce fit within legislative initiatives, and the allocation of funds?

A: It’s relatively limited. Like in the U.S., where you have special programs from the USDA to promote product, in Europe we have the same kind of thing. Two or three years ago, we managed to get a dedicated line for the budget. It was 10 million euros for promoting fruit and vegetables. This year, because of the debate of the Farm to Fork and the Green Deal, we have almost 20 million euros.

But that’s one of the only measures that I see. And if you want to change, I don’t think you will change everything by spending only 20 million euros. Our competitor in the agri-food sector has a turnover of over 2 trillion euro, and they spend 10% on marketing, which means that our competitor spends as much of the total turnover of the fruit and vegetable sector for marketing.

Q: Aren’t there other funding streams to push for through the different EU legislative proposals related to sustainability and health?

A: When we look at the overall package of the climate change legislation, which is the Green Deal, the number of tools and financial measures made available are completely disproportional in a negative sense, compared to the challenge.

I think in Europe in the agriculture policy, 80-85% of the CO2 emission comes from the animal sector. So, fruit and vegetables are a very small part of the percentage. But 80% of the EU budget is also going to the animal sector, so that’s also another problem — the agriculture budget is going to the category that maybe most contributes to the global warming. We have to change that.

We have a small organization, but I think Freshfel is a body with a strong support of all the sector, and I’m sure we can still do a lot of things to boost the category and to stimulate the consumption.