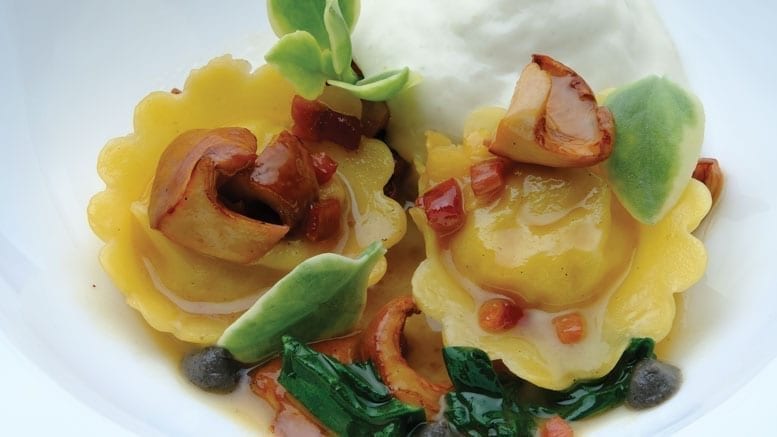 A “sophisticated oasis in a very busy city” is how Chef Gabriel Kreuther describes his eponymous restaurant in Midtown Manhattan, which attracts a diversity of regulars, as well as international guests since receiving a second Michelin star last year.

Opened in June 2015, Gabriel Kreuther is a relaxed, fine dining restaurant where the food is French-Alsatian inspired, with a New York spirit. The strikingly modern interior represents an achievement of a lifetime for Kreuther, who grew up on a farm in Alsace, France, and dreamt of becoming a chef at the age of four.

“The restaurant solely offers tasting menus in the main dining room, so we begin the culinary journey in Alsace and through the meal we evolve the dishes through my different experiences and cooking cultures,” explains Kreuther. “Toward the end, we zoom back closer to the Alsatian spirit.”

Being from Alsace, Kreuther says he tends to feature cabbage, endive and home-made sauerkraut more frequently since these are the vegetables he ate growing up. “But I love to incorporate others, and try unexpected preparations, like pickled green strawberries, cucumber, scallion, celery, specialty potatoes, leeks, mushrooms, banana, jackfruit, and ginger,” he adds.

In December, Kreuther will celebrate a number of fruits and veggies on his menu, such as porcini and chestnut mushrooms, celeriac, endives, apples, pears, white and black truffles, crosnes, leeks, salsify, cardoons and exotic fruits.

The restaurant uses a variety of sources depending on their specialty. “We source from Union Square Green Market and work with The Chef’s Garden, Huron, OH,” says Kreuther. “We also partner with esteemed purveyors, like Agri Exotic, Sid Wainer & Son, Baldor, Mushrooms & More, Blue Moon Acres, S.E.A. Market and Keepsake Farm (all based in the Northeast).”

Kreuther says he works closely with the farming community to buy direct the best they have to offer. “We like to cook in a way that highlights the ingredient and the farmer/producer,” he says. “We want to know who is behind the product, and understand why they are doing it, as we want to relay those stories to our guests.”

While dishes change every other day, the most popular produce-centric menu item currently available is a three-fold dish in the form of a Tomato Consommé en Gelée, Citrus-Cured Yellowfin Tuna and Goldbar Squash Gazpacho. “This is a trifecta dish that has surprising flavors unexpected for most people; the intensity of the tomato alone makes them smile,” says Kreuther.

Other produce highlights include: the ‘Dock to Dish’ Golden Tilefish, Fairytale Eggplant, Melted Leeks and Red Pepper Coulis; and the Sycamore Farm Corn Tortellini, with Chanterelle Mushrooms, Pancetta and Roquefort.

As well as recognizing increased demand for plant-based food, Kreuther has introduced two fruit-based amuse bouche — a Watermelon and Lychee Snow Cone; and a Mango, Gewürztraminer and Lime Pate de Fruit — to satisfy the increase in people wanting to end their meal with fresh fruits, rather than a prepared dessert. He also uses a diversity of fruit and vegetables in his Kreuther Handcrafted Chocolate range.

Kreuther also says he is considering opening another restaurant, probably a more casual concept in the not-too-distant future.