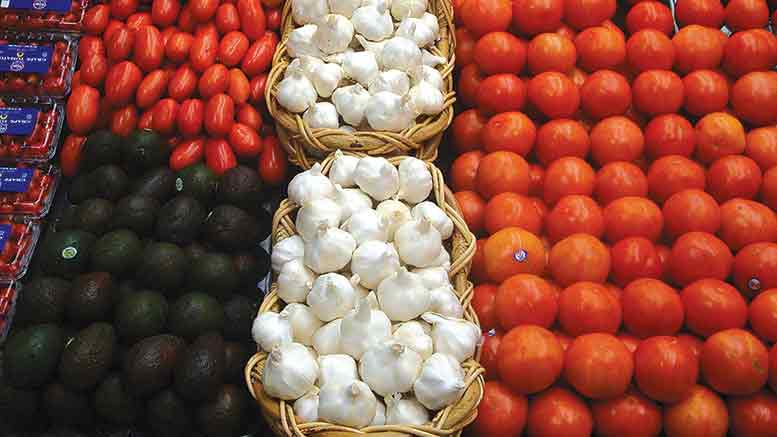 Bigger displays can help this flavorful staple get noticed among its vegetable brethren.

Few items in the produce department have the opportunity to be represented in so many different value-added ways. Retailers should take advantage of this growing category to increase garlic’s visibility and sales.

Louis Hymel, senior manager for Spice World in Orlando, FL, says retailers need to offer consumers more value-added options. “Opportunities for produce managers to cross merchandise give consumers more ideas on how to be creative with garlic.” One of Spice World’s new products, its garlic squeeze bottle, has allowed garlic to go from an ingredient to a condiment. “As the category of ready-to-use continues to grow, it demands more space.”

The majority of processed garlic product comes from China. In the latter half of 2017, 88 percent of China’s garlic crop was accounted for in fresh or chilled garlic, although even in high-production areas, China continues to be hampered by a lack of infrastructure for value-added. “Moving forward, we’ll be seeing even more peeled and other value-added garlic products, mostly out of China because of the cheap labor,“ says David Grimes, owner of David E. Grimes Company, Hollister, CA.

As a humble and otherwise mainstream produce item, it’s safe to say garlic could potentially have a crisis of confidence. A close relative of the onion, shallot, leek and chive, garlic easily can become lost in a huge display of onions and potatoes.

Because of its size, fresh garlic needs a greater exposure at retail. More real estate can equal greater sales for retailers, especially if garlic is merchandised around some sexier produce items, such as avocados and vine tomatoes. While wicker baskets for garlic merchandising have been the standard for years, going bigger can have positive sales results.

Although garlic may have a year-round presence in the produce department, Patsy Ross, marketing director with Christopher Ranch in Gilroy, CA, thinks for garlic to be a standout, it needs to be merchandised away from other dry items such as potatoes and onions. “Put it where it can stand out,” she advises. “Garlic is an impulse item and needs to stand out in a highly colored section.”

Ross recommends the Italian flag color for merchandisers — avocados, garlic and tomatoes. “Many retailers put together a ‘Garlic Center’ with fresh and value-added garlic, herbs and other high-flavor options,” she says.

Waleed Nabeel, produce buyer for Milwaukee-based Roundy’s Supermarkets, finds garlic sales are strongest in the last quarter of the year because of the holidays. Roundy’s has a strong cross-promotional program that moves value-added garlic product into other departments, contributing to higher value-added sales over fresh. Around the holidays, Roundy’s will dabble in pink garlic, a sweeter variety sourced out of Brazil.

Retailers agree the best way to boost garlic sales is to carry a full line of products – from fresh to value-added, to braids and elephant garlic. Larger displays can translate into increased sales for retailers. Per Christopher Ranch’s Ross, “Because consumers can rely on retailers to supply quality product year-round, we continue to see garlic consumption rise.”

Typically, upsizing can be a potential catalyst for increased shrink. However, with the lion’s share of the category given to value-added, garlic seems a safe bet for retailers. “The biggest consumer of garlic used to be the trash can,” jokes Grimes.

“The good news is,” according to Roundy’s Nabeel, “when it comes to shrink, garlic is way down the list. If rotated regularly and held at proper temperature and humidity levels, garlic can easily become one of the lowest-shrink fresh items in the produce department.”

The history of garlic in human consumption goes back several thousand years, originally thought to originate in Central Asia and brought to Egypt and Iran. Used worldwide now as a seasoning, its intense and unique flavor and aroma make it a mainstay of cuisines around the world and a nearly indispensable ingredient in just about every form of cooking on almost every continent.

Garlic’s exposure as an indispensable cooking ingredient has been on the rise, with celebrity cooking shows and the growing meal replacement kit industry. While the consensus across the industry is that garlic sales at retail have not been impacted by meal replacement kits, market research publisher Packaged Facts, reports meal kit delivery services, such as leader Blue Apron and Hello Fresh topped 5 billion in sales for 2017. With projections to top 10 billion by 2020, there is also potential impact as Amazon and Whole Foods get into the meal replacement niche.

Meal kit delivery service, Blue Apron, sends a whole bulb of garlic in the majority of its meal kits, although no recipe uses more than 3-4 cloves. Gobble, an online meal kit subscription service based in Palo Alto, CA, listened to consumers regarding their concerns with time constraints and excess waste, and now uses preroasted garlic in its kits. The upside of the meal replacement kits, according to Grimes Company’s Grimes, is the exposure of the product to consumers who are using garlic in meal kit recipes 2-3 times per week.

Varietal differences are also helping to spice up garlic sales, according to Alex Jackson Berkley, assistant sales manager at Frieda’s. “We are seeing black garlic and elephant garlic becoming more common in the retail market as chefs are utilizing more in their menus. You also see Elephant Garlic carried year-round as its large size makes it easy to use in recipes, whether it’s slicing, garlic chips or roasted whole garlic.”

OTHER OPTIONS BEYOND CHINA 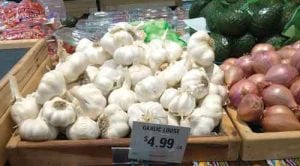 As California garlic gets ready for harvest, Gilroy, CA-based Christopher Ranch is gearing up for record production. Patsy Ross, marketing director with one of the leading growers, marketers and distributors of high-quality domestic garlic, confirmed the 2018 harvest will be the largest volume California has seen in recent years, topping 100 million pounds.

This is a far cry from the numbers seen in the early 90s when Chinese product hit the market and the future looked grim for California garlic. “When Chinese garlic hit in the early 90s, we quickly lost 50 percent of our business due to imports,” says Ross.

Although China dominates the world garlic production market, with a whopping 80 percent, other regions are beefing up production acreage and infrastructure to try to take a bite out of China’s market. A far second in garlic production is India, with just 20 metric tons – roughly 1.25 percent of the market worldwide.

David Grimes, owner of David E. Grimes Company, out of Hollister, CA, notes his company is seeing a larger volume of Spanish garlic being imported over the past few years. “The Spanish garlic ships in June and is very nice, with good quality. It’s a different variety than the Chinese garlic, and we are seeing cheaper prices on it now,” says Grimes.

According to the National Garlic Board of Spain, garlic production in Spain is down because of a drought in 2017. A lack of refined infrastructure for new growers and increased pressure from China has led to a desperate attempt by Spain to unload the crop on the world market. Prior to the 2017 water shortage, Spain was enjoying record production figures, while still growing its garlic exports from 35 percent to 85 percent over the past 10 years.

China’s export garlic crop has continued to see serious trade barriers, including import quotas and increased restrictions on pesticide residues. Stricter laws in the United States targeting dumping of Chinese garlic have led to a decrease in imports over the past few years.

California, however, finds itself in a favorable position to not only increase garlic production, but also to keep U.S. garlic front and center for consumers. Successful lobbying on Capitol Hill resulted in anti-dumping legislation that allowed some breathing room for domestic garlic. “This window allowed for an increase in interest in U.S. grown garlic, and California garlic acreage continues to increase yearly, “ says Christopher Ranch’s Ross. The ‘window’ Ross refers to led to supplier and consumer increased confidence in U.S. product reliability and quality. “We’ve also seen an upward shift in sales at the retail level with country-of-origin signage and consumer demand for high-quality domestic product.”