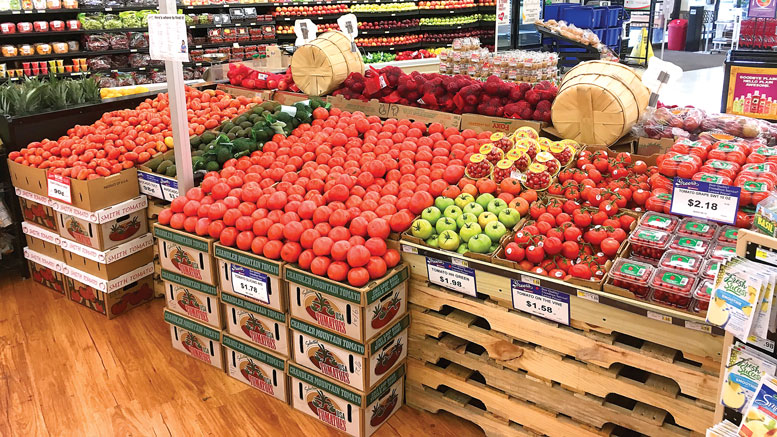 Greer’s Markets, a Gulf Coast chain, is modernizing its stores and increasing its merchandising of fresh produce. In the past, Greer’s, which operates stores in parts of Alabama, Mississippi and Florida, primarily sold meat and grocery. Today, it is expanding more into fresh produce.

In 2017, following the family-owned chain’s centennial anniversary, the Mobile, AL-based chain, run by fourth and fifth generations, embarked on an aggressive remodeling program to include more fresh foods.

Autry Greer & Sons, Inc., runs 28 stores in the central northern Gulf Coast. Four of the stores are conventional stores with the balance run as cash savers, a cost plus 10% format. A majority of stores are in southwest Alabama and southeast Mississippi, with two stores in neighboring Pensacola, FL, and another in far northwest Florida. Greer’s is employing its Hurley, MS, location, a 22,000 square foot store, as a test store for new signage and other merchandising tests.

With the 2012 hiring of Les Buerger, vice president of produce operations, and the 2018 hiring of Daniel Hulslander, produce category manager, Greer’s began working to make produce more of a magnet for its stores. Buerger is a fifth generation Greer’s family member who began working at the store in 2012.

“Some stores are more meat- and grocery-driven stores, with not so much on the produce side,” says Hulslander. “We saw an opportunity that we could really expand on produce.”

On average, produce represents about 600 square feet of Greer’s’ stores, which average 22,000 square feet, says Hulslander. Produce accounts for about 7% of the chain’s overall store sales, and Greer’s’ goal is to increase to 10% or more.

“We definitely want to focus on freshness, quality and presentation,” he says. “We want to make it so the shopper wants to come back.”

“We have seen significant gains over the past five years because of the focus on produce in our stores,” he says. “We are slowly taking ground from the meat department. Produce is very critical for our stores, according to the feedback we have received from our customers.”

In 2021, Greer’s plans to open a new concept store in Mobile. Designed with a gourmet supermarket presentation, the new store, Greer’s Market on St. Louis, will focus on perishables, including produce, meat and deli. It will also house a small footprint for grocery.

“The thing that will be great about this store will be the focus on the freshness of everything we do,” says Hulslander. “What we learn from this store will translate to other stores.” Greer’s’ Fairhope, AL, store is expected to thrive on the concept.

FRESH PRODUCE KEEPS THEM COMING BACK

The chainwide remodeling of older stores will also place a bigger emphasis on fresh. “The importance of these remodels is to keep updated and keep things fresh,” says Hulslander. “The more you work toward that goal of having the stores fresh and updated, customers notice the freshness and perceive that everything handled in the stores is also that way.”

Effective presentation is critical because when a customer walks into a store, the store has only three seconds to make a first impression. “It’s very important to portray that to your customers, that you care about the business,” says Hulslander. “It carries an overall freshness to what you’re doing.”

Greer’s wants to make produce — and their stores overall — something shoppers seek. “We have been working hard to make produce a destination in our stores,” says Hulslander. “We have been using produce to build on the overall perception of our stores and grow our customer base. There is more interest in fresh. We just understand that the fresher you make that department, the fresh perception really increases overall for the store.”

The remodels should work to bring more dollars per-customer. “Especially with produce, it is something most everyone will come back for,” says Hulslander. “We’ve always found that if you can present it in a such an effective way, it becomes an impulse purchase. Once they buy, the customers see that it’s fresh and consistent and will return. Fresh produce is one of the reasons they come back to you.”

To give its produce departments a fresh look, Greer’s uses designated preset areas that change display locations weekly. Weekly ad planners highlight three to six items that vary each week. Greer’s focuses on being consistent with its top 50 items and alters the product mix beyond those to cater to each store’s demographic. In 2020, Greer’s began working with growers and Associated Wholesale Grocers, its principal supplier, to develop a display contest to motivate the chain’s produce managers to go the extra mile for their customers and build sales.

“Fresh produce is one of the reasons they come back to you.”

To make it easier for shoppers to find products and to give them ideas on what items to use together, Greer’s focuses on category merchandising to display like items together. “Cross merchandising is another way of putting another dollar into the basket,” says Hulslander. “It also brings the customer back and gives them ideas on what to buy. Most people only have bananas, lettuce and tomatoes on their shopping lists. Everything else they buy is impulse. We try to create that impulse.”

Greer’s erects displays of lemons in the seafood department as well as lemons and limes next to bottled waters, with a small stand also adjacent to beer displays. It increases onion and meat sales by placing 3-pound bags of sweet onions in the meat aisle. The stores’ big sellers are 5- and 8-pound bags of potatoes and onions, with other top-selling items including bananas, bagged salads, berries, grapes and tomatoes.

While most stores use printed signs, in one store, Greer’s has been testing how handwritten signs affect sales. Hulslander says managers reviewing sales data discovered a drop of a full percentage of business when the store wasn’t promoting produce via handwritten signs.

With proper signage, produce departments can concentrate on communicating product and grower information. “It almost lends to the freshness of the product as well versus just a printed tag or store sign that has no pop to it,” comments Hulslander. While the signs state price, oftentimes customers want more information on what they’re buying.

The stores are studying displaying product on different display tables. Pallets stacked with farm bins and wood tables are one method. “It’s important to focus on the product versus the fixture,” Hulslander says. Bananas, apples, pears and oranges can be displayed on a $750 table, or place them on a stack of pallets with product boxes around that table. Nine out of 10 times, you will get more sales, he says.

Greer’s merchandises 713 produce stock-keeping units. At 21 SKUs, the small number of organics is indicative of Greer’s’ customers preferring to know where their food originates as local produce vs. it being organic, comments Hulslander. And local interest is growing, he adds. Greer’s sources regional produce including Alabama cabbage, citrus, peaches, sweet potatoes and tomatoes. The area’s satsumas are popular.

“We are trying to highlight more local growers in our stores,” says Hulslander. “We really want to grow that program.”

Two impactful mentors throughout Hulslander’s career taught him to put the focus on the product, not the fixture it’s on, “to make sure the customer knows the price in three seconds and use what the grower gives you to highlight their product,” says Hulslander. “If you focus on who grew the product, the product and its quality and use good signage, those things are more key than spending $750 on a dry table.”

Greer’s stores are located in middle class, ethnic, rural and inner city areas, as well as some upscale neighborhoods. Pricing in Greer’s’ Cashsaver stores is based on a cost-plus 10% program, and traditional Greer’s Markets merchandise product via conventional pricing.

Greer’s traces its lineage to early in the 20th century. In 1916, Autry Greer moved from Atlanta to Mobile and opened a grocery store in the city’s downtown, on the corner of Water Street and St. Michael Street. The store pioneered the cash-and-carry food store concept. Self-service grocery shopping came shortly after and developed into today’s supermarket operations. For a long time, that first Greer’s was Mobile’s first, and only, store to advertise prices. As other stores sold on credit and made deliveries, Greer’s’ marketed its prices as the city’s lowest.