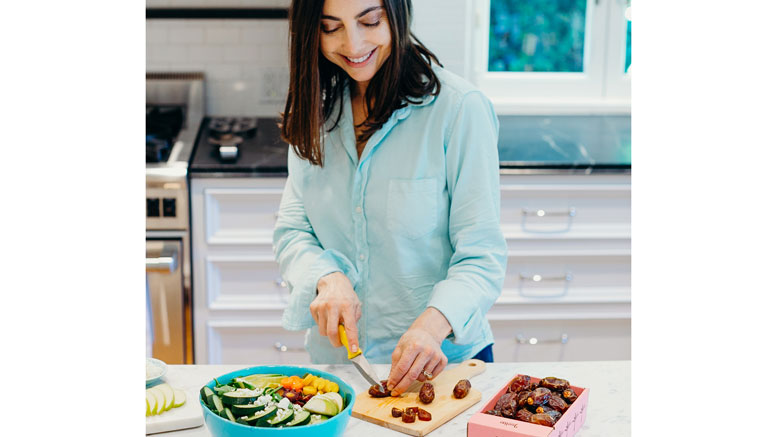 Think visibility and versatility if you want to sell more of this ancient desert fruit.

Dates, which are typically associated with certain religious events and related seasonal occasions, may be ripe for bigger sales. That’s because dates are healthy snacks and alternatives to candy and even sweeteners for health-conscious consumers, particularly those who favor organic and vegan eating.

For many Jewish consumers, dates are part of seasonal occasions and other events through the year.

“I sell dates all year-round,” says Zeke Kreitner, chief produce officer at Seasons, a kosher supermarket and convenience store group headquartered in Flushing, NY. “Three times a year, they really move, but it is because of our religious traditions.”

For Brooklyn Harvest, with five combo gourmet and community supermarkets operating in Brooklyn and Astoria, NY, dates are a year-round item in the produce department, too, with pitted medjools the focus, says Aridio Guzman, the operation’s produce supervisor.

The customer base of Brooklyn Harvest tends to be a mix, varying on location, of younger, more affluent consumers, and ethnic shoppers who have dates among the traditional foods consumed in their homelands and now the U.S.

Yet, dates have a ready audience among the health-conscious consumers at Brooklyn Harvest, given their nutritional qualities.

“Dates are very healthy,” Guzman points out. “It is always good to have them at home for when we want something sweet.”

At one time, he was able to source only one or two varieties, but because of consumer demand, now there are multiple varieties available, and he now offers options beyond medjool dates. Guzman carries different date products, for example, products marrying dates with almonds, with coconut, with peanuts, or with or without seeds.

“It is still a specialty item for certain customers,” she said.

Ethnic considerations play a big role in positioning dates, Sporn agrees. Of course, they have a role in the Passover/Easter timeframe, but retailers should take into consideration the growing Muslim population, as dates play an important role in Ramadan, Sporn says. “It becomes part of the holiday.”

Yet, religious holidays are not the only occasions that lend themselves to date sales, says Zak Trad, owner of Orchids Dates Corp., Coachella, CA. Produce departments can promote dates for Thanksgiving or even Valentine’s Day as a sweet, but healthy, snack or dessert item that brings an exotic twist. In fact, for the winter holidays, Trad suggests retailers remind consumers that dates are healthy treats with an extra boost, and are an excellent source of energy.

Retailers should also consider shifts in consumers among ethnic groups. Trad says that, although there hasn’t been a lot of market research done, in his reckoning, date sales are migrating beyond the traditional Middle Eastern consumer to include more Asian and Latino consumers, as well as health-conscious shoppers.

Dates have been appearing as food ingredients, which could put them on the path to broader acceptance. And organic dates are gaining in the market as health-conscious consumers weigh food choices.

Dates are featured in clean ingredient labels of famous energy bar brands, says Mark Masten, chief executive, Joolies Organic Medjool Dates, Coachella, CA. “Younger consumers, particularly millennial women, are starting to understand dates are truly a super food that combine incredible health benefits with no compromise on taste,” he says. “Healthy can also taste great. That is our main goal — to bring new consumers into eating dates and charming both those new households and those who have been eating medjool dates their entire lives with organic dates and modern, friendly packaging.”

He suggests promoting the virtues of the fruit as a source of dietary fiber, vitamin B and minerals to establish year-round sales.

“More and more consumers are learning that dates are a year-round super fruit snack, a great addition to salads and breakfast toppings, as well as a sweet, natural treat after dinner,” Masten says. “Last, but not least, dates make a great healthy sweetener to your nutritional shakes and refined sugar substitute in many baking applications. They’re super versatile as a healthy treat or sweet indulgence which could be effective to include year-round, as more consumers discover these delicious dates.”

Sporn says dates are often merchandised in secondary or tertiary positions. Any effort to sell more should include more conspicuous placement, particularly when retailers want to give them an extra push and get them out in front of consumers. Medjool and Barhi are popular varieties, and could benefit from prime spots. One way to do so could be specialty holiday packaged presentations of fresh dates, such as dates arranged on trays suitable for gatherings.

Trad makes the case for the medjool, Deglet Noor, Al Madina dates — popular varieties that should get top merchandising consideration.

Packaged fresh products can have a number of advantages, Trad says. Most consumers tend to purchase dates in 1- or 2-pound packages, however, Middle Eastern and Muslim consumers prefer bigger bulk packaging during the month of Ramadan, when dates are eaten after the daily fast ends at sunset.

“Consumers today are looking for packaging that is environmentally friendly and functional,” Masten says. “At Joolies, we designed a package that merchandises well — that is, it doesn’t get lost on the shelf — and is also eco-friendly. The Joolies package is from 100% recycled paper and is 100% recyclable. We reduced the use of plastic by a whopping 98%.”

If you want to move dates, small displays aren’t going to be effective.

“Dates should be in the front of the consumer when entering the produce department,” Trad says, “and should be the only items on the display. Make sure [that] display is full of dates.”

The No. 1 thing to consider when merchandising dates, Masten says, is to make them visible. “Dates are frequently merchandised on the shelves below the fresh fruit produce tables, so it’s a major challenge to get dates more visible.”

He says Joolies and The Date Shoppe provide merchandising units that make it easy for consumers to see dates “from 50 feet across the retail floor.”

Mor USA’s Sporn notes that dates can be frozen, something retailers could add to signage — that they can be stored longer for use in recipes.

“Having the dates on sales every 45 to 60 days will help generate more sales,” he explains, adding electronic campaigns and social media contribute to greater sales, too.

Matsen calls social media Joolies’ marketing “bread and butter.” That’s because Instagram, Facebook, Pinterest, etc., are great places to share images, recipes and healthy lifestyles. “The Joolies box shines through as attractive and eye-catching, which is perfect for social media.”

“Dates make great additions to charcuterie platters, as a baking ingredient, sweetener and taste enhancer for healthy shakes and as a salad topper,” he adds. “These applications all create great opportunities for cross-merchandising. Retailers are thirsty for new opportunities, and our ancient desert fruit is just that opportunity.”