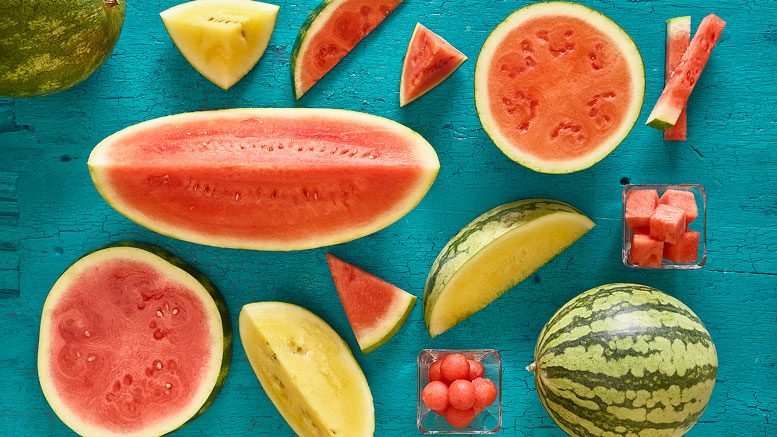 America’s produce departments have become virtually seasonless due to the consistent availability of fresh fruits and vegetables. Yet, there remains a specific seasonal excitement when summer arrives. It’s the peak of domestic production for items such as sweet corn, watermelon and blueberries. It’s no wonder that in the third quarter, produce represents more than one-third (34%) of total store sales, according to FreshFacts on Retail, Q3 2019, by the Washington, DC-headquartered United Fresh Produce Association (UFPA).

“Consumers shop in a store every week, most buying the same perimeter items weekly and letting the season dictate what fruit or vegetables they buy,” says Alex Berkley, director of sales for Frieda’s Inc., in Los Alamitos, CA. “Theme-based selling in the department is very important as it is what engages shoppers to recognize new items in season and bring them in to the now when the season changes beyond just weather and into what they can enjoy from the produce department.”

Memorial Day is the unofficial start of summer, announcing the beginning of outdoor activities, says Nichole Towell, senior director of marketing for Duda Farm Fresh Foods, headquartered in Oviedo, FL. “Sweet corn is the obvious choice for outdoor barbecues and grilling occasions like this.”

Sweet corn and watermelon are the two produce items promoted the most at B&R Stores for Memorial Day as well as throughout the summer, according to Randy Bohaty, produce director for the 18-store chain based in Lincoln, NE. Banners operated in that group include Russ’s Markets, Super Saver, Apple Market and Save Best Foods banners. “For promotion, our first goal is to offer a good value to our customers. For corn, this might be multiples pricing. Also, we clean the corn and offer four ears in a tray pack as an extra convenience.”

Tray pack sweet corn has seen a surge in sales in recent years, says Scott McDulin, vice president of marketing and retail sales for Springdale, AR-based Schmieding Produce Inc. “Even retailers who traditionally merchandised only husk-on corn are now offering a combo of both husk-on and tray pack, or going exclusively to tray pack. For customers, they can see the corn. For retailers, there’s less mess in the store, and the tray pack takes up less space in the back room than do crates. In general, 80% of tray packs contain four ears, but the larger box stores will sell up to 12 ears in an overwrapped tray,” McDulin explains.

Newer to the sweet corn category overall is organic. “We have been building this category the past few years and are excited for its continued growth,” says Katie Veenstra, director of marketing for GloriAnn Farms in Tracy, CA.

Loss-leader pricing or multiples pricing, the latter meaning a specific number of ears for a set price, are key ways to promote sweet corn for summer holidays, according to Daren Van Dyke, director of marketing for Brawley, CA-headquartered Five Crowns Marketing, one of the largest sweet corn shippers on the West Coast. “This provides a value to shoppers and helps us move our crop.”

May marks the start of the California table grape season, with green, red and black varieties harvested in the Coachella Valley. “New research shows 92% of primary shoppers report they would prefer to buy fresh grapes from California if they were priced the same as fresh grapes imported from another country,” says Jeff Cardinale, vice president of communications for the Fresno, CA-based California Table Grape Commission. “Research also shows that when grapes are promoted at a discount on the front page in a feature ad, it is twice more effective than just an in-store special.”

Peak promotional availability of California avocados is May through July, coinciding with Memorial Day and the Fourth of July, according to Jan DeLyser, vice president of marketing for the California Avocado Commission (CAC), based in Irvine. “California avocado displays with patriotic signage and a clear call out of origin work for all these holidays as well as for Flag Day in June. We offer a variety of American Summer Holiday-themed recipe booklets available for retailer displays. Cross merchandising near salads, potatoes, watermelon and picnic items works well for those themes.”

June is also California Avocado Month. In celebration, the CAC has a new merchandising bin themed to its new consumer advertising campaign featuring the tagline, The best avocados have California in them.

On the specialty produce front, young coconuts are available in great volume starting Memorial Day, says Frieda’s Berkley. “This is the perfect time to put this item on ad and again for Independence Day and Labor Day. Cross promote young coconuts and key limes as a hydrating drink.”

Summer is the peak season for multiple varieties of mangos, including Honeys, Kents, Keitts, Francis and Tommy Atkins, says Tammy Wiard, retail marketing manager for the National Mango Board (NMB), headquartered in Orlando, FL. “Our annual display contest is typically held in June or July. This is a perfect opportunity for the store teams to showcase their creativity in developing amazing mango displays and kick off the summer season.”

New are the NMB’s seasonally-themed bins for Grilling, Back to School and Q4 holidays, along with the Super Fun Super Fruit messaging. “We encourage our retail partners to merchandise mangos with summer seasonal fruit, particularly stone fruit. Our research shows that, when displayed with the seasonal stone fruit, mangos have a 45% lift in sales,” says Wiard.

Mid-June, and synonymous with Father’s Day, is when the Georgia state peach crop transitions from clingstone to freestone fruit. “That’s a switch customers look forward to,” says Will McGehee, founding partner of the Genuine Georgia Group, LLC, in Fort Valley, GA. “The nice thing about freestones is that it’s easy to cut them in half, remove the pit and put them on the grill. It’s a cooking method that moves a lot of fruit and has made 2-pound grab-and-go pouch bags explode in popularity. These now represent over 25% of our business.”

“Father’s Day is a great time to leverage blueberries as a heart-healthy food for Dad,” says Kasey Cronquist, president of the Folsom, CA-headquartered U.S. Highbush Blueberry Council. “We recently worked with the American Heart Association (AHA) to be able to use the AHA Heart-Check Mark on packages and in promotional communications. In partnership with retailer Registered Dietitian-driven programming, cross promoting blueberries with other fresh and prepared foods carrying the AHA Heart-Check Mark offers an opportunity to reinforce blueberries and other healthful food choices as an expression of love for dads everywhere.”

Radishes may be small but are a mighty promotional item for Father’s Day. “We are seeing an increase in the value-added radish category, including coins, ministicks and ready radish products,” says Duda Farm’s Towell. The company provides recipe inspiration and produce applications to assist in retail promotions. For example, the Perfect Burger recipe calls for radish coins as a garnish.

Cherries are one of the power promotional items at B&R Stores for this star-spangled holiday, says Bohaty. “We include Rainiers, which are a nice addition to the ads. Additionally, we do an 11-pound lug of cherries. This might not be right on the Fourth of July, but sometime between Memorial Day and the Fourth after the start of the season when the time is right, and we can offer customers a good value.”

Watermelon is another signature fruit for the Fourth. “Creating unique displays and applying special merchandising techniques to attract the consumer are just a few ways to increase consumption and sales,” says Jordan Carter, director of sales and marketing for Leger & Son, Inc., in Cordele, GA.

July is National Watermelon Month. It is the months of July and August when the National Watermelon Promotion Board (NWPB), in Winter Springs, FL, hosts its Retail Display Contest. The Board publishes a kit online that helps retailers with in-store merchandising, displays and promotion.

“Watermelon Queen in-store promotions continue to have great success at the retail level. These young women are smart and educated and bring something unique to the produce department and can educate that hesitant customer on how to choose the best watermelon,” suggests Juliemar Rosado, director of retail and international marketing for the NWPB. “Cross merchandising is a great opportunity to showcase watermelon and other ingredients and demonstrate the benefits of both.”

Creative watermelon demonstrations were one factor that earned the Wakefern Food Corp. the 2019 marketing award of the year presented by the Lakeland, FL-based National Watermelon Association. “Wakefern and the Well Everyday program advertised watermelon as part of a larger marketing effort geared towards summer barbecue season,” explains Allison Ryder, health and wellness project manager for the 354-store cooperative, based in Keasbey, NJ, which operates the ShopRite, The Fresh Grocer, Price Rite Marketplace, Gourmet Garage and Dearborn Market banners in nine Mid-Atlantic and New England states.

“Many of the in-store dietitians closed the loop at store level and helped to showcase different ways to serve and prepare watermelon during live food demonstrations,” says Ryder. “For example, there was watermelon slices or ‘cake’, which was ‘iced’ with Greek yogurt and topped with seasonal and local produce like blueberries or, for an added crunch, granola.”

Also, to help customers think outside the ‘slice’, Ryder adds, “Wakefern developed custom recipes like Chicken and Watermelon Salsa Tacos. This recipe showed customers how to use watermelon in a savory way, which they previously may have not of considered. For 2020, ShopRite will continue to promote watermelon to our shoppers and the array of health benefits that come with enjoying the fruit.”

Blueberries are the ideal blue ingredient in a red-white-and-blue produce promotion for the Fourth of July. “Retailers can leverage cross promotions with other red berries, ice cream, pre-packaged sponge-cakes and mixes for quick and easy summer desserts. Blueberries are also the perfect complement to summer salads and can be cross merchandised with lettuces, croutons, nuts, dressings, tomatoes, cucumbers and other fresh produce for building the perfect summer salad,” suggests the USHBC’s Cronquist.

Blueberries are also ripe to promote all month long. “July was recently recognized by Congress as National Blueberry Month. Therefore, July 2020 will be the first time for grocery retailers and blueberry marketers to leverage this peak season month with promotional themes celebrating the blueberry’s role as a healthy component of America’s summer table,” says Cronquist.

Hatch Chiles, named after the original growing area in Hatch, NM, are a seasonal southwestern favorite that today are promoted via live roastings in more than 2,000 retail stores nationwide. “We started helping retailers set up roastings outside stores 14 years ago and continue to provide the tools for these promotions,” says Robert Schueller, director of public relations for Melissa’s/World Variety Produce, in Los Angeles. “These tools include a signage kit, marketing research for that particular area, roasters and education for store employees to safely conduct the roasting. Although fresh Hatch Chilies are only available for a limited time, the roasted peppers can be frozen and enjoyed in recipes all year round. Plus, the popularity of the Hatch is all about flavor, rather than heat.”

Schueller suggests roastings on weekends, at higher volume stores, increasing the size of the Hatch chile display in-store at the same time and cross merchandising with ingredients for Hatch chile recipes. Hatch Chile Mashed Potatoes, Hatch-flavored Avocado and Mango Salsa and Hatch Chile Guacamole are all recipes in the company’s “Melissa’s Hatch Chile Cookbook”, which can be sold in a shipper display.

This holiday is often the last hurrah for grilling and outdoor picnics in much of the nation. As such, says B&R Stores Bohaty. “Depending on availability, we’ll promote sweet corn, watermelon, all the berries and grapes, too,” says Bohaty. “After Labor Day is usually when we’ll do our fall re-set as the apples, pears, squash and pumpkins come in.”