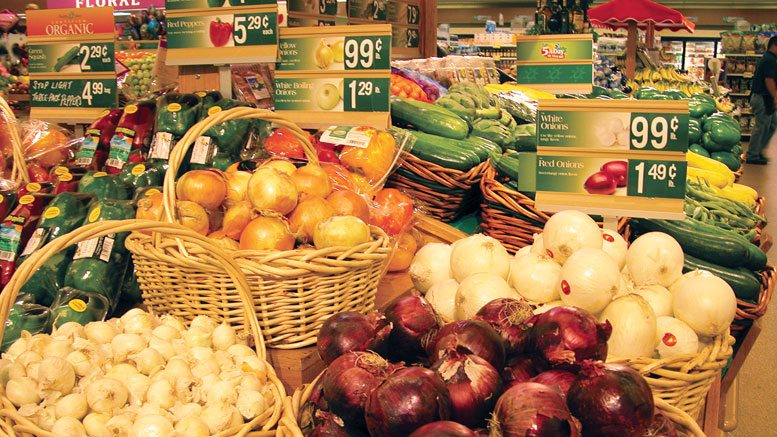 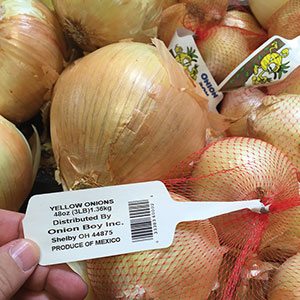 Onions continue to climb the charts as more consumers come to appreciate their nutritional value and culinary versatility.

They represent the third-largest fresh vegetable industry in the United States, according to the National Onion Association (NOA), Greely, CO, as per capita consumption increased 70 percent in the past two decades.

For retailers, imported onions play an essential role in maintaining good-looking displays year-round, as onion imports more than doubled in the past two decades, according to USDA statistics, with Mexico and Peru alone combining for more than 650 million pounds per year.

Merchandising these onions from below the border and around the world is generally no different than optimizing sales of domestic product from California, Texas or Nevada.

“The consumer seems more interested in getting the spring-type onion, rather than where it came from,” says Wayne Mininger, executive vice president of the National Onion Association. “It is distinguished from the storage-type onion. Thin-skinned, lighter, milder onions are available all year. That wasn’t the case 15 years ago.”

The National Onion Association, founded more than a century ago, represents 500 growers, shippers and brokers, including many who do business both in the United States and below the border.

Retailers generally let the customer see the quality, but beyond the legally required country-of-origin information, do not generally promote where the product was grown.

“We merchandise the imported onions in the same manner as domestic onions,” says Maria Brous, director of media and community relations for Publix, Lakeland, FL. “We adhere to the law to correctly identify the country of origin.”

While domestic onions are available out of storage year-round, the imports play the essential role of filling slots for fresh, lighter skinned, milder product. Shippers of both the domestic and imported product generally agree there is no significant difference in how they are sold at retail.

“Retailers merchandise imported onions right along with all their other onions,” says Derrell Kelso, president of Onions, Etc., Stockton, CA. “Promotions are winding down on Vidalia, some are promoting locally grown sweets. Peru doesn’t start until mid- or the end of September.”

The only exception to this rule is that Vidalia has built a brand name more powerful than any of the individual suppliers.

“We market our product year-round as Oso Sweet Onions because we want to build our own brand, with the exception of Vidalia, where you call them out by name,” says Mark Breimeister, director of sales for Oso Sweet Onions, Savannah, GA. “We mention Vidalia first, because the name is so strong, and then we mention Oso Sweet.” Oso Sweet also grows onions in the Chilean Andes foothills, and in the Weslaco area of Texas.

Most of the “imported” onions are grown in close cooperation with domestic shippers who are looking to extend their seasons.

“From January to March they come from Honduras, Guatemala and Mexico. China is also trying to export to the United States and Canada.”

Much, maybe most, of the imported product is grown in cooperation with U.S.-based onion growers. Mexico, at around a half-billion pounds per year, is the largest source of imported onions, as Western growers go below the border to extend their season.

“There are connections between the Mexican industry and the Texas industry, and to a certain extent, the California industry,” says the National Onion Association’s Mininger. “The imports are mostly complementary, but the onion business has more exceptions than generalities. There are onions that move into the United States from Mexico at the same time as they are available from Texas, the Imperial Valley and Georgia. There is overlap in the winter and spring.”

The fastest-growing crossover between domestic and imported production is the pipeline from Peru that has developed largely as Georgia-based growers discovered they could harvest varieties similar to the Vidalia sweets in the off-season.

“The imported onions are complementary; they are separate sales, separate items,” says Breimeister. “They are flat sweet onions like we would grow in Georgia or California.”

“Merchandising sweet onions alongside additional products that can be combined to create an easy meal solution will raise the ring at the register. Retailers should also consider displays outside of the produce department to maximize sales during the fall months.” 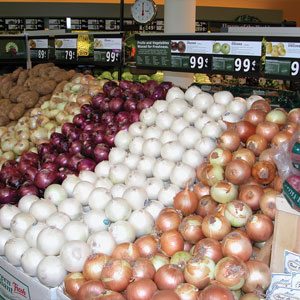 Oso Sweet grows flat sweet onions in Vidalia, GA, Brawley, CA, and in Peru. Bland Farms, a major grower-shipper of Vidalia onions, also grows in South America. The company says it feels “good enough about the granex varieties it harvests in Peru,” that when the seasons overlap, it promotes them side-by-side with the iconic Georgia sweets.

“We look forward to a great Peru season,” says Troy Bland, chief operating officer of Bland Farms, Glennville, GA. “Bland has very good quality coming out of Peru, despite news of other onions having quality issues.”

The Peruvian cousins of the Vidalia onion are quickly earning a reputation among savvy retailers.

According to Onion’s Etc.’s Kelso, there is an ongoing effort to expand sweet onion shipments from Peru to the United States and Canada.

“Imports from Peru run through mid-February,” says Marty Kamer, president of Keystone Fruit Marketing, a division of Progressive Produce, Los Angeles. “Imports from Mexico start in mid-February and run through early May. In the early and middle of Peru season, some U.S. onion growing areas have sweet onions. January and February, Mexico and Chile become a factor.”