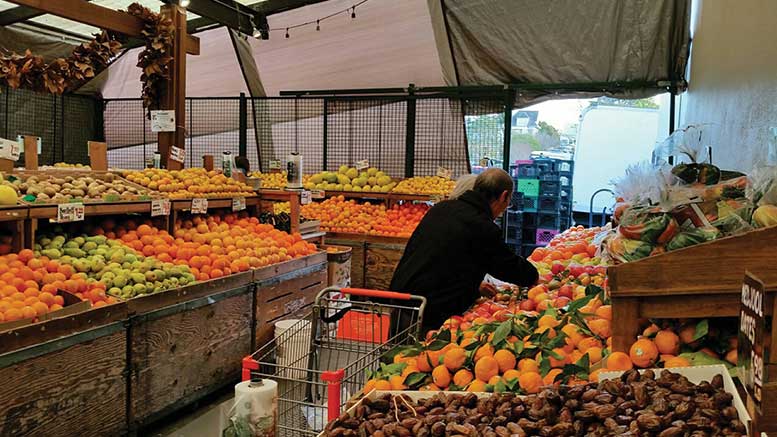 Monterey Market in Berkeley, CA, exemplifies many qualities that make the Bay Area a great place to be in the produce business. Tom Takumi Fujimoto and his wife, Mary Nobori Fujimoto, founded the store. Tom had a long history in the produce industry, says his son Robert, who now owns the store with his son Scott. “He grew up in the Los Angeles produce industry during the movie years in the late 1930s,” Robert says. “He was in the L.A. farmers market and then the produce market and then farming.”

Tom was forced into an internment camp during World War II. When he was released he had to rebuild his business from scratch. He decided to do it in Oakland instead of Los Angeles. After running a successful market stand, he and Mary opened Monterey Market in 1961.

In those days, local grocery stores had a pretty limited produce selection, says Robert. “They sold potatoes, onions, tomatoes and lettuce, just generic produce. In Southern California they were closer to the farmers and they had a better, wider variety of produce. When [my father] came up, he had a different idea of what produce should be.” His store brought that vision to local customers and they responded with great enthusiasm.

Monterey Market operates from a 7,500-square-foot building. “It has a real nice open feel, like a fresh market,” says Scott. At least three-quarters of the space is dedicated to produce. There’s a small grocery section that sells dry goods and dairy.

Food is primarily displayed in the wooden bins farmers use to deliver produce. The crates are put on pallets or stacked on wooden shelves and stands built by an employee who is also a carpenter. Signage is all created by hand. “We’re very simple,” says Scott. “Our store is a lot older. It’s not this shiny, brand-new store.”

Their reputation for quality and local produce is what keeps people coming back. “During the peak season, I’d say almost all of our product is coming from local farms from around here,” says Scott. “We go to the three produce markets. We buy from everybody because we have long-term relationships with a lot of the vendors.” They buy organic whenever possible because that’s what their customers prefer.

One thing Monterey Market prides itself on is a wide selection of wild mushrooms. The store carries Maitake, Morel, Chanterelle and Black Trumpet varieties in season. It also stocks White Button, Cremini and farmed Shiitake mushrooms on a regular basis.

Although the market has a strong focus on seasonal produce, it’s getting harder to only do that. “Ten years ago I couldn’t sell organic grapes during certain times because people knew it wasn’t time for them,” says Henry Sehuin, the store’s produce buyer. Now people expect to see their favorite fruits and vegetables year-round.

To differentiate the market from others, Sehuin tries to stock items that aren’t available at other local grocery stores. During citrus season, he carries Seville and Bergamot oranges and yuzu. He also gets unusual Mandarin varieties such as Golden Nugget and Tahoe Gold.

Berkeley provides somewhat of a unique environment for selling produce. “People here, they’re foodies and they know a lot about the food itself,” says Scott. “They want to know where it’s coming from. They know about the farmers because they’ve done their own research.” Monterey Market does a nice job of filling that niche