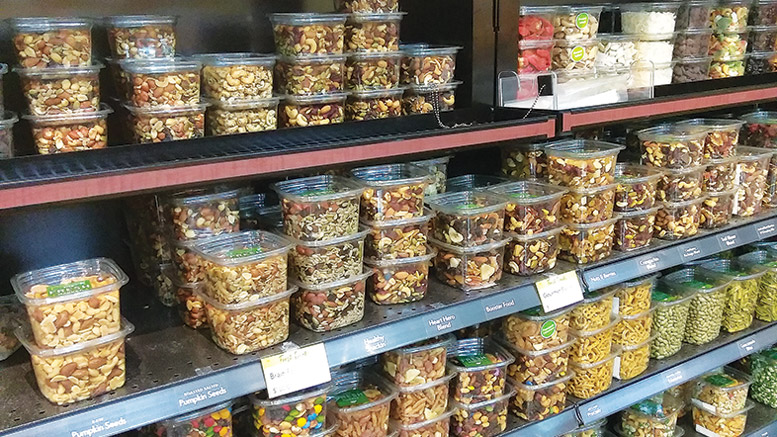 On-the-move Americans want healthy snacks they can eat anywhere while on the go, and combining dried fruit and nuts in trail mixes satisfies that desire.

Dried fruits and nuts are, of course, highly flexible, and can be consumed in many different ways — from serving as essential ingredients in baked items, salads and yogurt to being munched right out of the container while en route. Although the produce department may not be a go-to destination for dried fruit and nuts, more of them are carrying trail mixes and other combinations.

Since the ingredients that comprise trail mixes can vary tremendously, there are ample opportunities for retailers to offer a dazzling variety — and earn substantial sales and profits.

Part of the success formula must be educating health-conscious consumers about the various ways trail mixes can be consumed, and just how many nutrients these combinations can offer.

JUST WHAT IS TRAIL MIX?

The first step in the process should be defining just what trail mix is. Not everyone is in complete agreement.

Technically, trail mix — alternatively known as snack medley, mix, GORP (Good Old Raisins and Peanuts) or scroggin — is a combination of granola, dried fruit, nuts, and sometimes chocolate, originally developed as a lightweight, easy-to-store and nutritious snack meant to be carried along on hikes. The combination is said to date back to the early years of the 20th century, when outdoorsman Horace Kephart recommended it in his popular camping guide. It provides a quick energy boost from the carbohydrates in the dried fruit or granola, and sustained energy from the fats contained in nuts.

“There isn’t a clear definition, but trail mixes typically have nuts/seeds with other items such as dried fruit, chocolate/yogurt chips or coated nuts or fruits, or snack items like sesame sticks,” says Greg Glasser, President of Torn & Glasser Inc., an importer, processor and packer of nuts and dried fruit in Los Angeles. “Trail mixes are great on their own, as a breakfast topping, or even as an ice cream topping.”

The trend, as Glasser sees it, is moving toward clean ingredients, organics and unique flavors. The appeal, he adds, is “somewhat intuitive” and is enhanced by clear packaging. His company offers resealable containers for on-the-go snacking, as well as smaller pack sizes. He thinks supermarket retailers do a good job of educating consumers about the health benefits and myriad ingredient combinations via their websites and signage.

“A trail mix is any combination of nuts, dried fruits, jerky, chocolate/yogurt-covered items and/or granola,” says Stephanie Blackwell, owner and chief executive of Aurora Products in New York City. “The most common consists of nuts, fruits and chocolate/yogurt-covered items.” Blackwell sees the segment moving in the direction of value-added nuts with high-end candies and dried fruits.

Robert Schueller, director of public relations for Melissa’s Produce in Los Angeles, says trail mix is a growing category, as evidenced by the fact that his company introduced just four items in its line a scant five years ago. “Well, it took off in 2016 and now we have eight varieties. People want to cook with chia seeds and flax seeds because of their health benefits and don’t know how to begin.”

Melissa’s markets the Melissa’s Clean Snax line, which is similar to trail mix, in 40 states, with more to come. It is described as “crispy, crunchy, sweet, salty, satisfying and gluten-free.” They are available in five original flavors: Almond, Coconut, Cranberry, Pumpkin Seed and Quinoa Crunch, as well as newer varieties such as Matcha, Southwest Spice and Hatch Chile.

Marc Goldman, produce director for Morton Williams Supermarkets in New York City, suggests there are “a huge number of items considered trail mix. There’s more combinations than anyone can carry.” His stores carry about 20 different mixes.

“People look at them as a healthier snack,” Goldman has found. “Cranberries are popular. People like antioxidant mixes and Omega-3.” In addition, every item the stores carry is available in an organic variety.

Goldman highlights the product’s “unlimited amount of combinations. Different suppliers can have different names for an item with the same ingredients.” His stores carry 16-oz. containers that can be resealed. “We also carry smaller-sized bags with a ziplock top,” he points out. All of them are designed for grab and go. “You can educate with signage, ads and just talking to the customer,” says Goldman. “That’s the best way.”

“When I hear trail mix, I hear it as a very general term,” says Chad Hartman, director of marketing for Truly Good Foods, based in Charlotte, NC. “Others hear a specific term, with a very small set of ingredients, mostly nuts and dried fruit. We like to use the term ‘snack mix’ and talk about four different categories: sweet mixes, nut-and-fruit mixes, spicy-and-bold mixes and salty-and-savory mixes.”

Providing consumers with food for thought can prove invaluable.

“As a supplier,” notes Truly Good Foods’ Hartman, “we recommend many applications. A nut, seed and raisin type of mix is perfect as a salad topper.” There are also many nut-and-fruit mixes that can be baked into breads and muffins, he adds. “If you want to get really crazy, make some fried rice and toss in a spicy crunch snack mix. Yes, there are always new varieties available. Every day, companies are uniquely spicing a nut or creating a flavorful component and developing a snack mix around it. I am seeing most of the innovation with sweet and sweet-and-spicy snack mixes.”

Many times, Hartman points out, the marketing message is conveyed effectively in the name, a tagline or a description. “We have a snack mix called Sweet Heat, for which we intend to convey the message of a sweet component and a hot/spicy component. We also use descriptions such as, ‘This mix is a zesty combo of sweet and spicy when you just can’t choose.’ ” Retailers depend on the package and on information that the suppliers provide, says Hartman, “as every mix has its unique qualities.”

Packaging also plays a role. Hartman says he loves a good resealable cup. “There is nothing better than a trail mix that fits in a cup holder and flows smoothly out of the container. Portion control, with 1- or 1.5-oz. bags, is also a great thing to offer.”

Hartman expects the category to continue to grow. “There is endless opportunity for innovation in flavor profiles and in packaging. There are also new demographics and eating habits that are finding the benefits of eating snack mixes.”

American consumers, Melissa’s Schueller says, are looking for “fast, easy healthy solutions that actually taste good.” His company’s line is called Clean Snax “because there are 10 or fewer ingredients. If you like a grocery store granola bar, you will see about 30-plus ingredients, including oils and extra sugars.” Interestingly, he adds, the most popular varieties with consumers remain Almond, Dried Cranberry, Coconut and Pumpkin Seeds, “the original four when we introduced the category.” Clean Snax are square, bite-sized nuggets. The category registers well with what Schueller terms a mainstream audience. “It’s for anybody, however those big on chia and flax seeds are the main following.” The primary consumption occasions continue to be snacking and on-the-go eating. As he points out, “It’s a ‘fuller’ food between meals.”

Retailers across Melissa’s 40 states are merchandising the products effectively on the display shipper that the company supplies, adds Schueller. “It doesn’t take up much room at all and can be placed anywhere in the department.”

Convenience sells in nearly any category, and as Aurora Products’ Blackwell points out, trail mix items “have evolved a bit. However, more importantly, the packaging has evolved even more in the produce department to allow easy-opening or transportable containers, such as car cups, single-serve bags, etc.”

Savvy supermarket retailers are hard at work touting trail mix’s health benefits. “Many times, it is not the supermarket retailers but rather the manufacturer that educates the consumer,” says Blackwell. The manufacturer often tries to differentiate health aspects on their packaging by mentioning ‘Omega-3,’ ‘fat-free,’ ‘Non-GMO,’ ‘Full of fiber,’ and ‘protein-rich.’ “Also, having these items placed in the produce department in a clear tub gives the impression of being healthier and freshly packed.”

As far as the product’s myriad uses, Blackwell asserts, “Sometimes retailers can help by cross-merchandising. For example, our Salad Fixins’ is basically a trail mix with cranberries, seeds and sesame sticks. It did great when merchandised next to the lettuce.”

Morton Williams’ Goldman says although the category in his market has leveled off, he expects it to continue to do well over long haul. “It’s still a large volume category for us, and I expect it to be that way for a long time.”