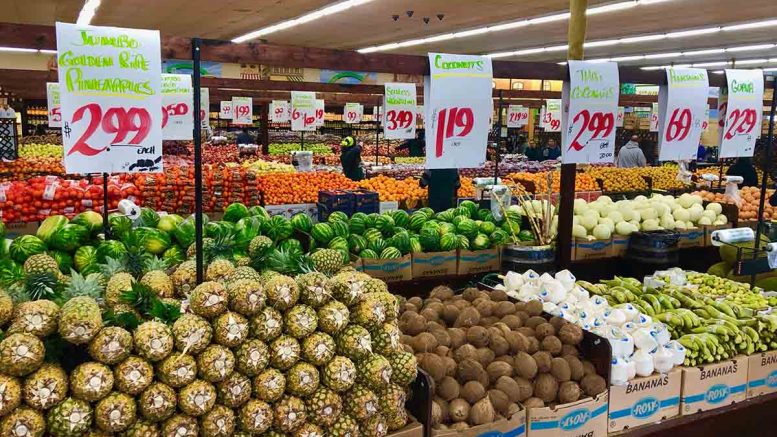 For generations, Detroit-area residents have been able to fill their shopping carts with a large variety of fresh produce from Joe Randazzo’s Fruit and Vegetable Market, Inc., a chain of stores that has become a community staple.

The flagship of four stores, which date their origin to the early 1950s, is on East Outer Drive, on the city’s northeast side, directly north of Detroit’s downtown. The stores radiate a family-oriented vibe, a type of personality in which shoppers are likely to see a family member and owner walking around the produce aisles.

“Produce is everything for our operation,” says Sarah Urbani, director of marketing and advertising. “It’s our bread and butter. We have an open-market feel when you walk in our store. Everything is freshly displayed and restocked throughout the day. Our family has been providing families with the freshest produce at the lowest cost. Families throughout metro Detroit have been relying on Joe Randazzo’s for generations.”

In 1953, Joe Randazzo, born Giuseppe Randazzo in Terrisini, Sicily, immigrated to the United States at 26 as a stowaway on a freighter. Locked in a small, dark room next to the engines, a friend brought him food. One time, when the friend was ill, Randazzo went without food or water for nearly five days. Randazzo left the ship when it arrived in New Orleans for repairs and arranged to live with an uncle on Lake St. Clair in Grosse Pointe, MI, northeast of Detroit.

After hard work at a Ford assembly line, Randazzo peddled fruit with the money saved and later opened his first store in 1956.

Today, the Randazzo family operates stores on Detroit’s northeast, north and west sides, in Dearborn Heights, MI, Roseville, MI, and Westland, MI, along with a nursery in Macomb Township.

As fresh produce occupies 98 percent of the stores, it commands 95 to 97 percent of sales. The Outer Drive store includes 10,000 square feet of retail space, with a 50,000-square-foot cooler, which supplies product to other stores.

Primary produce items include apples — of which a dozen different varieties are merchandised — and other vegetables. The store promotes items during their peak production seasons.

Randazzo’s promotes its specialty produce via “Specialty Items of the Month” social media postings. The posts inform consumers of the exotic produce, provide a summary of the products and explain how to eat or cook with them. In a page dedicated to specialty items on the store’s website, visitors can click on photos that provide information on the product’s origin, taste and recipes.

The stores’ forebearer taught his offspring how to merchandise produce. “Joe Randazzo started with a small truck selling produce,” says Urbani. “He knew the business his whole life and passed tradition down to his family who followed in his footsteps growing up buying and selling produce.”

The stores, particularly the ones in Dearborn Heights and Westland, serve a variety of ethnic groups and ages, including grandparents who have shopped in the stores for decades passing tradition down to their grandchildren. According to the U.S. Census Bureau, of the 4.3 million people in the Detroit-Warren-Dearborn, MI, metropolitan area, 66 percent are white, 22 percent black with 4 percent each of Asian and Hispanic descent. In the city of Detroit, blacks account for 79 percent, whites 14 percent, Hispanics 8 percent, Asians 1.5 percent with American Indians at .3 percent. To cater to the region’s diverse demographics, the stores carry a large variety of ethnic-oriented foods.

“Detroit is a great city for our produce retail,” says Urbani. “What makes it great is that we have been here in Detroit since 1956, and we’ve grown with Detroit. We are well-known in this city, and we cater to families who have been coming to us for generations.”

The city’s transformation makes Detroit different. “This city is unique because it’s undergone so many changes,” she says. “Detroit has gone through a ton of ups and downs. We’ve constantly been there through it all, feeding families in the freshest and most affordable way possible.”

The store’s central location is a major advantage for sourcing and retailing area produce. The store caters to everyone in its Detroit neighborhood, but is also a short 10 minutes from downtown, and about 15 minutes from suburban areas such as Grosse Pointe, Roseville, St. Clair Shores, MI and Warren, MI.

The proximity to Michigan’s many local produce growers also helps. “Local products play a huge role in our produce business,” says Urbani. “We try to buy as much locally grown farmer-based produce as possible. Today’s consumers are becoming more health-conscious and aware of where their produce is coming from and want to support homegrown products. Demand for local produce will continue to increase.”

Though Randazzo’s doesn’t sell the same kinds of foods sold by the area’s other larger chains, it must remain competitive. “There are many large grocery stores; however, we are a one-of a-kind, produce-only market that differentiates us from any of these larger grocery stores,” says Urbani.

That distinction is key to survival. “One must stand out to be successful in today’s competitive retail environment,” she says. “They must have something that differentiates them from every other store or Amazon click-of-a-button purchase. They must stand for a good cause, offer prices that are unbeatable, provide a good experience or be convenient for customers. What we have is the largest variety of produce at prices you can’t beat.”

To keep those customers happy, Randazzo’s works to make shopping different. Its 350 employees have been a part of the Randazzo family for generations, some as many as 40 years.

“Our overall philosophy is a family-run business that passes the savings on to our customers with unmatched value, quality and selection,” says Urbani. “We engage customers by encouraging them to make an experience out of coming to our store. ‘Come with your family or friends, visit our open market, be a part of this family-oriented, affordable experience.’ Because the majority of our employees have been working at our stores for so long, customers can always count on seeing a friendly, familiar, knowledgeable face.”

“The produce business is constantly changing,” says Urbani. “For buyers, every day is different, and it’s hard to predict the next day. It is also very fast-moving. It’s unlike any other business.”