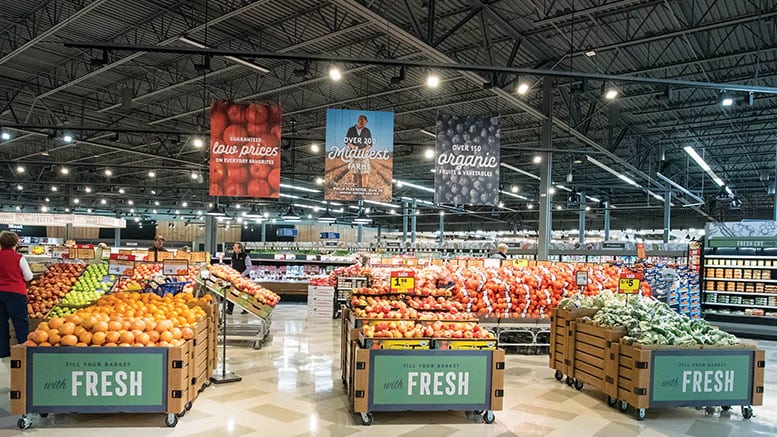 Michigan is akin to California or Florida in the wide diversity of fruit and vegetable crops harvested during a season that begins every year in the late spring and continues until the early fall.

While both the Golden and Sunshine states enjoy generally mild temperatures because of the proximity of the oceans, much of the agricultural land in this industrial giant on Canada’s doorstep has a moderating influence of its own.

Farmers within range of the Great Lakes, especially Lake Michigan, enjoy a climate that lets them produce a dazzling variety of fruits and vegetables. 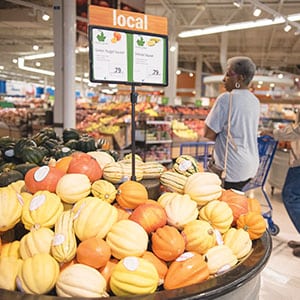 “We grow a big array here,” says Todd Van Solkema, chief executive of Van Solkema Produce, Inc., Byron Center, MI. “I would say the important commodities in this area are cucumbers, peppers, squash, celery and cabbage, all the staples.”

After catching his breath, Todd Van Solkema added a few more items that should not be omitted from his impressive list of Michigan-grown produce staples.

“Blueberries, asparagus, watermelons … and corn is a big staple for us,” he says. “We grow all the lettuces – head, leaf and Romaine.”

Over the past century and more, Michigan farmers have nurtured supply chains that serve both their neighbors looking for locally grown, and markets in the eastern half of the country that rely on this vital hub.

Michigan As A Local Supplier

Most of the state’s 7.5 million apple trees, enough to trail only Washington and New York, are located near Lake Michigan.

The state’s peach, plum and pear trees, and 80 percent of the tart cherries in the entire country, are also in the same neighborhood.

And don’t forget the berries. Along with the usual crop of local strawberries and blackberries are enough blueberries to continue a friendly competition for No. 1 in the nation.

“The past few years, it’s been between us and Georgia for the No. 1 blueberry producer,” says John Miyares, group leader for the field crop and fruit section of the U.S. Department of Agriculture National Agricultural Statistics Service in East Lansing, MI.

“As a retailer founded on fresh produce, we emphasize building relationships with the best growers. Michigan growers are some of the best in the country. We have relationships with 200 growers from the Midwest, including more than 150 from Michigan, who supply us with 75 produce items.”

But if there is one crop many locals most look forward to it might be the asparagus, which kicks off the harvest season every May.

“The prevailing winds blowing across Lake Michigan lower the chances of spring freezes and slow down the heat; this is why the crops are diverse,” says John Bakker, executive director of the Michigan Asparagus Advisory Board, Dewitt, MI. “The vast majority of the fruits and asparagus are grown close to the lake. The other vegetables are spread out on the peninsula.” 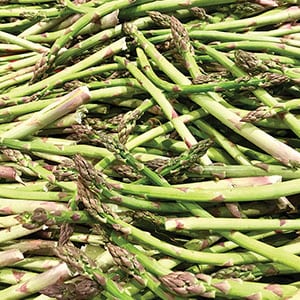 Michigan farmers produce roughly 25 million pounds of asparagus every year, which ranks third in the entire country, and the long green stalks that appear every spring on more than 10,000 acres near the lake are a harbinger of the harvest to come.

“We come in around the first of May and continue through June,” says Bakker. “California is usually tailing off when we start, but we compete with everyone else – Washington, Ontario, New Jersey, Peru and Mexico.”

Like much of the fruit and vegetable bounty produced near Lake Michigan and on the nearby peninsula, the residents of nearby urban centers consider this asparagus “local.”

‘The Chicago market would consider Michigan locally grown,” says Bakker. “We are close to a number of urban areas outside the state that consider Michigan to be ‘local.’ The vast majority stays east of the Mississippi, although we send some to Texas and Colorado.”

Although the state’s asparagus growers lost much of their frozen and canned market share to lower-cost competition, they have made up the difference through creative promotion.

“We started promoting through social media and food bloggers a few years ago,” says Bakker. “Our asparagus volume has been pretty steady, but the percent going to fresh has been going up. We’re at 60 to 65 percent fresh market, and the rest is canned or frozen.”

Growers find nearby consumers covet Michigan asparagus, in particular, when it is ready to harvest every spring.

“The asparagus is in great demand when we start early in May,” says Tyler Hodges, fresh produce sales rep for Superior Sales, Hudsonville, MI. “After asparagus, we ship mixed vegetables, green peppers, cucumbers, all kinds of squash, and Michigan celery is another big item.”

Superior Sales ships a large line of fruits and vegetables from its facilities in Michigan, New Jersey, Texas, Arizona, California and Washington.

“Our competition depends on the item,” says Hodges. “With asparagus it is Mexico. In the summer months, it’s a lot of neighboring states. We benefit from the buy local movement, but there are also local programs in other states. It started years ago and keeps growing.”

The largest Michigan-based supermarket chain makes a special point of promoting this local asparagus when it is available.

Around half of Meijer’s 240 stores are in Michigan, while the rest are in nearby Wisconsin, Illinois, Indiana, Ohio and Kentucky.

Michigan is also the regional leader, and among the top national producers, of a number of important fruit crops.

This bounty of fruits begins with the berry harvest in June and continues into the late fall with the third-largest apple harvest in the country.

“We harvest strawberries in June, sweet cherries from late June to late July, tart cherries in July and August, blueberries in July and August, peaches from August to mid-September, and apples from late August to late October,” says Miyares. “Michigan is the No. 1 tart cherry producer in the country; we produce 80 percent of the nation’s crop. We do all right with sweet cherries, too, and we’re about No. 8 with peaches. We are the number three apple producing state. We produce nearly a billion pounds a year.”

As this abundant harvest becomes available, retailers such as Meijer promote it as either from Michigan or from the region depending on the location of the store.

“We are always interested in what’s in season and freshest,” says Roger Harkrider, director of produce at Meijer. “Some of the real important items from Michigan are asparagus, apples, blueberries, potatoes, sweet corn, onions, watermelons, cabbage, leafy greens and squash. In Michigan, we tout it as ‘from Michigan’; in all our stores we promote what’s local from the six-state area.”

Meijer, built for decades on its relationships with local farmers, has a longstanding tradition of offering Michigan fruits and vegetables.

“As a retailer founded on fresh produce, we emphasize building relationships with the best growers,” says Harkrider. “Michigan growers are some of the best in the country. We have relationships with 200 growers from the Midwest, including more than 150 from Michigan, who supply us with 75 produce items. We were providing locally grown long before it was trendy.”

In the eyes of many Michigan retailers and consumers, the produce is not just more local, it is also better.

“The faster we can get produce from the field to the customer’s basket, the fresher it will be,” says Harkrider. “Michigan growers produce a diverse variety of crops. Working with them is part of the DNA of Meijer.”

The State Is A Produce Hub 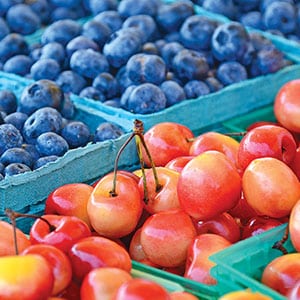 At least some Michigan growers agree their harvest is better when eaten fresher and closer to the field.

“It’s fresher, and fresher is better,” says Gene Talsma, president of Crispheart Produce, Hudsonville, MI. “The customers know where it is coming from.”

Crispheart has grown to be a national brand in celery since William Talsma, Gene’s father, started the company on the eve of World War II, and Gene came on board after he graduated from high school in 1960.

“We harvest from July through October,” says Talsma. “We go to this side of the Mississippi; you can only go so far west.”

Crispheart ships celery from late June to late October, going as far west as the freight advantage over California allows.

Many Michigan produce operations service both the local and the national produce markets.

“Michigan is a great hub with a mix of items across the board,” says Superior Sales’ Hodges. “We ship pretty much everywhere from the Mississippi east. We’ll ship mixed vegetables until mid September, hard squash most of November, and then we’ll ship apples through the winter. Locally grown is definitely a popular trend within the Midwest. For the rest of the country, we promote domestically grown.”

There are other Michigan grower-shippers who have developed operations providing a wide variety of fruits and vegetables to markets far and near.

“We go as far as Dallas and Houston and down to Miami,” says Henry DeBlouw, president of Mike Pirrone Produce Co., Capac, MI. “We do everything including lettuce, cabbage, cucumber, zucchini, eggplant, kale, collards and pumpkin. Organic greens are a big thing for us.”

Mike Pirrone Produce began in 1951 as a mushroom farm and has grown to ship a wide range of vegetables from 3,000 acres within the climate moderating influence of the Great Lakes, and neighbors farm an additional 8,000 acres.

“We do a lot with Michigan retailers, with Michigan grown,” says DeBlouw. “But we also do locally grown throughout the Midwest. Some items are local, some go all over. The rhubarb, organic greens, kale and collards mostly stay local. A lot of the pumpkins stay local because of the shipping costs.”

As a regional shipper, Pirrone has experienced the impact of the growing number of consumers who prefer to get their produce at home without having to go to the market.

“We began selling more a couple years ago to companies that deliver to your house,” says DeBlouw. “We are a grower-packer-shipper. We deal with retailers, foodservice and schools.”

After working throughout the Southeast, there is nowhere Van Solkema would rather be farming than home in Michigan.

“It’s one of the most fun, unique areas,” he says. “I’ve been growing for 27 years; I’ve grown in Florida and Georgia. We have 100 items under one roof here. The diversity of all the products under one roof is pretty unique. Everything is sold within the state, and everything also goes out of the state. We ship to Boston, to Miami, to Texas, to Minnesota in the summer timeframe.”