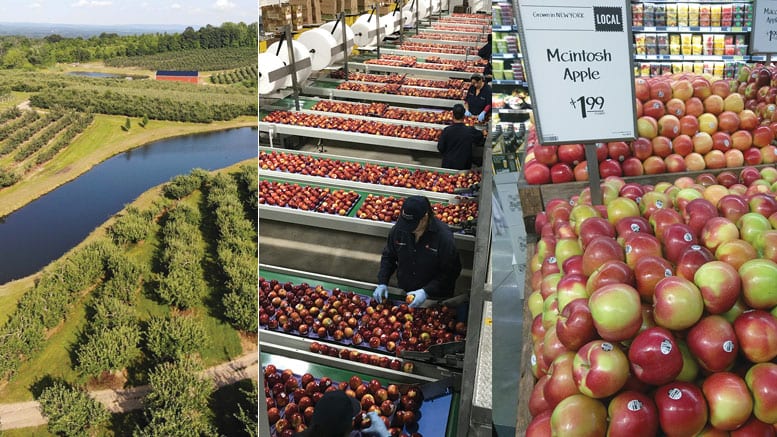 The Big Apple nickname for New York City might as well apply to the entire state. New York ranks second or third in the nation in apple production, sometimes swapping spots with Michigan based on the annual crop, and second only to Washington in apple production. New York grows more apple varieties than any other state, according to the New York Apple Association, headquartered in Fishers, NY. These apples are harvested from more than 10 million trees on 700-plus farms, many of which are family owned and multigenerational.

“What makes New York apples special is that they’re local,” says Jeff Cady, director of produce and floral for Tops Friendly Markets, a 159-store chain headquartered in Williamsville, NY. “You can’t drive around without seeing orchards and ‘U-pick’ operations. You know you’re in apple country when you’re in New York, and that’s what customers want: local New York-grown apples.”

“New York is remarkably diverse in its growing regions,” says Susan Brown, professor of horticulture at Cornell University’s College of Agriculture and Life Sciences, who most recently bred the SnapDragon (Honeycrisp offspring) and RubyFrost (Braeburn and Autumn Crisp cross) varieties at the New York State Agricultural Experiment Station in Geneva, NY. For example, “Our Champlain region has a shorter season and more challenges with cold temperatures, while Long Island has a long season and can mature Pink Lady.”

The state’s farmers are expecting a bountiful crop of apples this year. Specifically, the New York crop was estimated at 31 million bushels at the Premier Apple Conference, held in Syracuse, NY, in late June. This is down from 33.2 million bushels in 2018 and is a half million bushels below the state’s five-year average.

Similarly, apples grown at Stanley Orchards Sales, LLC, in Modena, NY, a little more than 70 miles north of New York City, will peak on 100s and 88s with some 72s too, according to sales manager Tony Maresca.

WHAT’S IN, WHAT’S OUT, WHAT’S NEW
McIntosh, Empire and Cortland are among the best-selling New York apple varieties at Tops Friendly Market, says Cady. “In general, our older shoppers are looking for these mainstay apples. The younger generation is moving to sweeter varieties like Gala, Fuji and Honeycrisp. We carry them all and more.”

Cady adds that except for late July and early August, when most of New York’s apple growers have sold out; varieties such as Granny Smith (that require Western U.S. conditions to color) and organics (which are a challenge to grow in the humid East Coast climate), New York supplies a large portion of the chain’s apples.

“There’s no doubt that McIntosh and Empire as well as varieties like Red Delicious, are being cannibalized by some of the new varieties, but they both still have a strong following by those in the Mid-Atlantic and New England,” says Austin Fowler, co-owner of Fowler Farms, Wolcott, NY. “McIntosh customers will even look for this variety if they move out of the area. That’s why I’m trying to convince retailers in the South to carry them.”

Indeed, “we did get asked for McIntosh apples a year or two ago,” says Terry Esteve, produce director at Robért Fresh Market, a six-store chain based in New Orleans.

Favorite mainstream apples — such as Gala, Fuji and Honeycrisp, as well as newer varieties such as SweeTango, Koru, EverCrisp and Pazazz — are grown in New York.

“There’s been increased plantings of Gala over the past five to 10 years, and more is being planted, with excellent volume until the end of May,” says Stanley Orchards’ Maresca.

Honeycrisp volume, as well as that of Empire, will be down across the state this season, say growers.

SweeTango, a trademarked cross between Honeycrisp and brand-name Zestar, developed at the University of Minnesota, is cultivated by only certain farms in New York. Each is a member of the Next Big Thing, A Grower’s Cooperative, as are select growers in the Central and Western U.S. and Canada.

“SweeTango is like Red Delicious, only better. The skin is thinner and not as red, the flavor is sweet and it has a great crunch,” says Fowler Farms’ Fowler.

EverCrisp, a Honeycrisp-Fuji cross-developed in Ohio, is being planted in New York. Its attributes include that it stores well, hence making it ideal for healthy eating promotions after the New Year.

As with new varieties SnapDragon and RubyFrost in past years, Tops Friendly Markets’ Cady plans to introduce EverCrisp this year.

“To do this, we use all the tools available. This includes in-store display and signage with bullet points that speak to the apple’s sweet and tart flavor, print ads, and digitally, getting the word out through Facebook, Twitter and Instagram,” he says.

This season, the Sun Orchard Fruit Co., in Burt, NY, will offer materials to aid with the display, merchandising and promotion of the Pazazz apple, according to Tim Mansfield, director of sales and marketing.

Likewise, Crunch Time Apple Growers, a cooperative of 147 growers throughout New York State that cultivate SnapDragon and RubyFrost, has a number of retail and consumer marketing campaigns planned for this season. These range from the inclusion of a signature SnapDragon recipe in Costco’s Farm To Table Recipe Book to a billboard in New York City’s Times Square from Nov. 12-Dec. 15. The billboard message, “The Snap is Back”, is part of ad campaign that kicks off in September and includes print ads, video and online advertising.

“Crop production will be up over 2018 by 30%, conservatively,” says Rena Montedoro, vice president of sales and marketing at Lockport, NY-based Crunch Time Apple Growers.

Even more new varieties are on the horizon.

“We have three new open-release varieties that will be named this fall,” says Cornell’s Brown. “We wanted growers outside of the clubs to have access to some new materials. One variety is an early-season beautiful pink apple with incredible crispness, juiciness and a mild but very pleasing flavor. The second is a scab-resistant apple that does not have the acidity or astringency commonly found in scab-resistant material. The third is an apple suited to fresh eating, baking and cider.”

1. Pick a pack. More than 90 percent of New York’s fresh crop apples are sold in some type of consumer package, says Jim Allen, vice president of marketing for New York Apple Sales, Albion, NY. “Future trends are to package in environmentally friendly packaging. The reduction of plastic is a huge priority, and use of compositable, biodegradable and sustainable choices is increasing.”

“It’s the farm stand appeal that retailers want to bring into the supermarket,” says Stanley Orchards’ Maresca. “We’re seeing more requests for private label totes, yet often these don’t include the New York logo like shipper packaging does. I think retailers miss out because of this. Local is a huge draw.”

Pouch and poly bags are also in demand.

“All managed varieties tend to be in pouch bags from a merchandising standpoint. It’s also a convenient pack for consumers. As a result, three of our top packs are 2- and 4-pound pouch bags and a 3-pound poly bag,” says Fowler Farms’ Fowler.

The NYAA has created a new design to celebrate a quarter century since the association’s founding and the 60-year anniversary of the state’s Apple Marketing Order. There are three distinct colored 3-pound and 5-pound poly bags: gold, green and red. The image is of apple trees, a beautiful blue sky and New York apples. There are new high-graphic totes too.

2. Build it. “They (customers) will come,” says Tops Friendly Markets’ Cady, whose produce managers have built everything from bountiful freestanding orchard-like displays to those featuring New York apples in tote bags cross-merchandised with apple cider, apple chips and caramel dips.

This season, the NYAA has created a new display shipper that can help retailers create additional shelf space to display the state’s apples. These display units tell the apple story at a glance and match the Association’s newly created, four-color bin wrap, updated variety cards and Variety Guide. The shipper can be used for bulk apples or those in totes and pouches. The NYAA will launch a national Holiday Extravaganza Display Contest for the months of November and December.

3. Feed demand. Consumers are demanding fast, easy ways to eat healthy, according to Crunch Time Apple Growers’ Montedoro. “We use recipes to market our apples online, in print and in packaging. For example, our signature apple recipe this year in a SnapDragon Power Salad with Ginger Dressing.”

Sun Orchard’s Mansfield says his company utilizes Facebook and Instagram to distribute information and recipes about the Pazazz variety. “The idea is that this will drive first-time trials and follow-up with consumption of the new variety.”

The NYAA’s new Variety Guide has photos of many of the New York apple varieties and descriptions of each variety’s eating characteristics. New York Apple and Broccoli Salad, the French Style New York Apple Tarts, and New York Apple Arugula Pizza with Pecans are the three recipes highlighted in this guide. The guide can be used as a point-of-sale piece and handed out at special store events.

4. Promote. Price is always a factor when it comes to promotion, says United Apple Sales’ Baker. “What’s often overlooked is that that traditional winter, spring and summer crops like citrus and stone fruit are stretching into the fall now. Therefore, it’s important for retailers to offer apples in the same-size package and comparable pricing to these other produce options.”

When it comes to new varieties, such as New York’s SnapDragon and RubyFrost, price is important, but not the purchase driver, adds Crunch Time Apple Growers’ Montedoro. “We are selling a premium product with a superior flavor, pressure, color and brix. We want our promotions to help retailers educate our consumers about the benefits of eating our apples, sell more apples and get a great return.”

Buy-one-get-one-free ads during the peak of the season in October, as well as promotional themes such as “locally grown”, “fall harvest” and “holiday baking and entertaining” are effective, according to the NYAA’s Haskins.

Beyond this, she adds, “we’ve had such great success with social media that we will amp it up for the coming season with a series of grower videos focusing on topics like family, community, passion and New York apples. We’re not only targeting New Yorkers, but consumers in other states where retailers are merchandising our apples. We will also bring back our series of videos that capture consumers experiencing the great taste of New York apples and posting them on social media. Plus, we are working on a host of consumer giveaways to make things exciting.