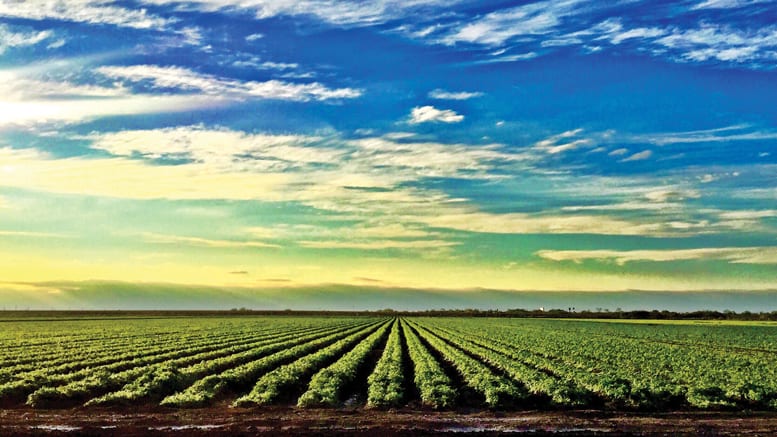 The saying “Everything’s Bigger in Texas” holds true for the produce industry as prominent companies offer big opportunities for business. Texas farmers are responsible for nearly $1 billion in fresh produce, according to Dante Galeazzi, president and chief executive of the Texas International Produce Association (TIPA) in Mission, TX.

Texas is fortunate to benefit from a subtropical climatic zone that typically has mild to moderate temperatures throughout the winter growing season, explains Christine Morley, president of Rio Fresh in San Juan, TX. “We are located in close proximity to the Rio Grande, resulting in a consistent water source,” she says. “The state’s growing population and booming economy increases demand and contributes to our growth. Texas has done a lot to contribute to and support economic growth.”

Companies operating along the Texas border have capitalized on their prime position and import nearly $6 billion of fresh produce from Mexico, according to TIPA. “Together, the Texas-corridor represents a sourcing point that gives North American produce buyers access within a single region to $7 billion worth of fresh produce items covering every kind of fruit and vegetable imaginable,” says Galeazzi.

Texas is perfectly situated to enhance the bond between Mexico and the United States, says Vicky Cabello, chief operating officer at Cabefruit Produce in McAllen, TX. “McAllen is a constantly growing port,” she says. “Nowadays, it’s very common to see produce business all along the border.”

Raul Cano, vice president of Grande Produce and Cano & Sons Trucking in San Juan, TX, agrees the companies on the border with Mexico have an advantage. “Mexico is a huge country with a lot of regions producing year-round,” he says. “This gives us access to product 365 days a year, a real plus in being able to supply our customers year-round.”

From a logistics point-of-view, Texas presents a central, one-stop, year-round source for fresh produce. “Product shipping from the state can reach all major metropolitan hubs in the United States within three days,” Galeazzi says. “This means product is fresher, has more shelf life and is delivered with a significant freight savings when compared with shipping product from coast-to-coast.”

Though agriculture faces challenging obstacles, Texas companies work hard to maintain the legacy. At J&D Produce in Edinburg, TX, Bret Erickson, senior vice president for business affairs, emphasizes the importance of carrying on the tradition of Texas agriculture. “Over the decades, South Texas has experienced decreasing numbers of growers, packers and agricultural acreage,” he says. “It’s a sad fact. Despite that trend, J&D is proud to say we are continuing to grow and invest in our operation. Back in the early 80s when J&D was established, there were maybe 25 to 30 packinghouses in the Rio Grande Valley. Today, only a handful remain.”

Family-owned and operated Rio Fresh is growing, packing and shipping on the same land it has farmed for more than 75 years. “Produce is in our blood, and we are extremely passionate about it,” says Morley. “We are focused on sustainability and longevity in the way we do business, our relationships with our customers and the way we steward our land. We focus on partnering with long-term customers to determine what is important to them and invest in our business accordingly.”

Grande Produce’s Cano affirms the magnitude of understanding the growing part of food. “This is not something coming out of a machine,” he says. “You have to plant, harvest, pack and ship. We must ensure people understand the importance of farming and that farming values are preserved.”

The passion at Grande Produce is to lay a foundation for the next generation. “Over the coming decades, I want to see us remain a family company,” says Cano. “I would like for our children to continue the tradition and leadership, and for them to maintain the same relationships with our growers, who hopefully will be led by their children, as well.”

Galeazzi reports the top five crops in Texas are watermelons, potatoes, grapefruit, onions and cabbage. “The Rio Star Grapefruit is grown in South Texas and is sweet enough to eat like an orange,” he says. “The Texas 1015 Sweet Onion is another regional favorite and has a great mild flavor.”

Rio Fresh grows more than 30 varieties of greens, root vegetables, herbs and onions. “We begin our season in October with greens/herbs and start onions at the end of January,” says Morley. “In December and January, we move a lot of cooking greens (collards, kale, turnip greens, mustard greens), herbs (cilantro, parsley, dill), beets and cabbage.”

Texas offerings also include a long list of companies that saw the opportunity to bring items not grown in the United States. Galeazzi says items such as mangos, limes, papayas and avocados could be sourced during the winter months from warmer climates.

Cabefruit illustrates just such a company, focusing on mangos and other tropical fruits. “Since the beginning, mangos have been the main star of our company,” says Cabello. “We offer more than eight varieties, and our seasons cover almost year-round starting in Mexico at the beginning of January and finishing in December with Ecuador. We are growers of other tropical and exotic products, including jackfruit with production year-round; mangosteen and rambutan, with production from May to September; avocados year-round and coming soon cacao and dragon fruit.”

Grande Produce handles more than 100 products throughout the year. “We have a wide variety of fresh products and dried goods,” says Cano. “Some are year-round. such as peppers, cilantro, limes and avocados; others are seasonal, such as mango, prickly pear or fresh garbanzo. We follow the seasons in Mexico, especially for such items as Roma tomatoes, cucumbers, bell peppers, and jalapeños. We’ll start the year in Sinaloa, then move to North Mexico, then to Central Mexico and finally back to Sinaloa.”

Though J&D was founded on its mixed wet-vegetable line — including collard, kale, Swiss chard and cabbage — the company also handles herbs, parsley, cilantro and dill. “A lot of our customer base is in Canada so they’re looking for unique things such as Napa and Bok Choy cabbage and even Methi leaf (an Indian herb),” says Jimmy Bassetti, chief operating officer at J&D.

J&D handles several proprietary varieties, including its Honey Sweet Onion, grown in Texas, New Mexico, Georgia, Peru and Mexico. J&D maintains supply of this unique variety 12 months a year. “We developed and manage all the production of the seed internally,” Erickson says. “We use the same seed all year round, chasing the sun to have consistent ideal growing conditions, and we plant the same seed no matter which growing location we’re in. This ensures our customers can always count on a consistently mild and sweet onion.”

J&D’s Beta Sweet Maroon Carrot is another proprietary variety boasting a maroon exterior and orange interior. “If you coin it, there is a consistent circle of maroon ringing the exterior,” says Bassetti. “We’re seeing a growing interest with the Betasweet due to its flavor and exceptional health benefits.”

J&D’s melon program includes personal seedless watermelon, regular round seedless and honeydews. Erickson points out J&D’s honeydews are the first domestic honeydews available in the U.S. marketplace, coming in the first week of May. “We’re particularly proud of the eating quality and flavor,” he says. “Our brix averages between 14 to 16 percent.”

Since many Texas operations have extensions in Mexico, TIPA’s Galeazzi notes numerous companies are implementing more visibility across their supply chains. “GPS trackers for trucks and temperatures are being used more frequently, as are real-time location updates for shipments and electronic communications,” he says.

The Texas industry also is seeing a continued diversification of new commodities both domestic and imported. “We’re seeing growth of new items, such as beets and Asian vegetables such as daikon, as well as expansions of existing variety lines including sweet red onions, colored cauliflower and the return of Texas honeydews and cantaloupes,” says Galeazzi. “Plus, we continue to see innovations in packaging for many conventional items, including limes, mangos, avocados and jicama – all being driven by a convenience-oriented marketplace.”

At Cabefruit, Cabello observes growth is part of the company philosophy. “This past year we won the award for ‘Most Innovative Fruit Product’ at VIVA Fresh with the Marvelous Jackfruit as meat substitute,” she says. “We also are marketing Mangosteen Tea.”

Rio Fresh also finds innovation through being a woman-owned company. “As a woman-owned business, we benefit from diversity in our leadership and the viewpoints that shape our business and the decisions we make,” says Morley. “A lot of our customers and consumers are women. Having that viewpoint represented strongly in our business allows us to serve our markets even better.”

Companies recognize the need for pushing the norm in food safety, logistics and technology. J&D has invested heavily in infrastructure and staffing over the past decade according to Erickson. “We were fortunate to hire a well-respected director of food safety, Eduardo De la Fuente, who leads a sizeable team of managers and food safety techs.”

Cano of Grande Produce says, “Food safety is crucial for us. Our customers need to know they can trust the quality and integrity of what we sell and deliver them.”

Morley has seen a demand for more locally grown produce and supply chain transparency. “End users want to know their produce is fresh, where it came from, and that it was packed in a safe environment,” she says. “With freight costs and restrictions increasing, there is also a benefit to shipping more within our state.”

In February, Cabefruit is planning a grand opening for its cold storage facility. “We’ll have around 19,000 square feet with 10 docks,” says Cabello. “We are planning a consolidation program for existing and new clients.”

Grande Produce offers originality in servicing customers through its Mix-and-Match program, as well as related companies. “Customers can order any amount of boxes for any of the products we carry, and we mix and match pallets,” says Cano. “We also have a sister trucking company on the Mexico side. So, if customers want orders fulfilled directly from Mexico, we can do that as well – straight from the grower to their door. Soon, we’re also starting re-packaging to offer customers more options.”

The pacesetters continue to improve. “The future for us, and a lot of the industry, will be mechanization and automation,” says Erickson. “We will need to find those areas where we can implement some of this.”

Morley of Rio Fresh adds, “On the growing side, we are always trying new varieties, new irrigation and fertilization techniques and different harvesting methods,” she says.