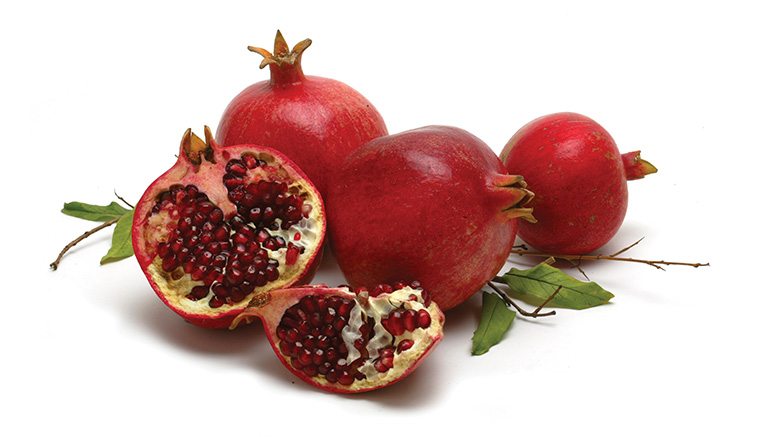 According to Tom Tjerandsen, manager of the Pomegranate Council in Sonoma, CA, 20 percent of people in the United States have had a pomegranate experience, while 12 percent have actually purchased the fruit. Pomegranates’ index of consumption peaks on both coasts, but drops in the mid-section of the country. “Anytime you have product with limited penetration with perspective target users, there is room for substantial growth,” says Tjerandsen.

Created in 1991, the Council has a few objectives, including being a resource for consumers who have questions regarding usage, conducting research on the efficacy of pomegranates, helping to build an export market business for U.S. growers, and gathering/delivering information to the public and industry.

Robert Schueller, director of public relations of Melissa’s Produce in Los Angeles, is similarly optimistic about the pomegranate market. He notes pomegranates have been growing 5 to 10 percent each year for the past few years while the arils have been growing at 10 to 15 percent per year. “From our perspective, in the past five years, people have gotten to appreciate the product due to its being available nearly all year.”

Traditionally, pomegranates were only available in the fall. Simonian Fruit Company in Fowler, CA, has been growing, packing and marketing pomegranates and other produce since 1960. “Pomegranates have been growing in terms of availability and volume, even though the industry decreased,” says Jeff Simonian, president. According to Simonian, there has been a decline in American farmland dedicated to pomegranates with the current acreage at approximately 40,000, down 5,000 acres. The decrease is primarily attributed to drought conditions in California, where the mass majority of American-grown pomegranates come from and the challenging economics related to the product.

Today, pomegranates are available most of the year, with the exception of a couple of weeks at the end of July and February. This is due to imports from Chile and Peru. “The near seamless 52-week supply is quite important for retailers. It also allows pomegranates to hold their place in the produce section,” says Tjerandsen.

POM Wonderful has invested more than $200 million in marketing to drive the demand for pomegranate products. The company continues to invest in marketing in order to raise the profile, awareness and popularity of pomegranates. Cooper says the company is planning a big marketing campaign for the coming season, which will include a billboard in New York’s Times Square.

SunnyGem Produce, located in Buttonwillow, CA, has approximately 2,800 acres of Wonderful pomegranates. “People wait for the California Wonderfuls.” says Mitchell Ritchie, sales director. “They’re unique because they are sugary, plump and taste good. It’s a longer-lasting fruit with holding power, and is attractive in appearance.”

Besides being eaten straight, pomegranates can be used as a garnish. People enjoy them on salads, guacamole, with meat and even on top of ice cream.

“They can be part of a meal from the appetizer to dessert,” says Shaleen Heffernan, an independent sales representative who sells for various growers and shippers, including Gargiulo Produce in Hillside, NJ.

Katzman Berry Corp., Bronx, NY, has been importing arils for 10 years under its private label, Bloom Fresh. Stefanie Katzman, executive manager, says the two biggest factors behind the sales increase of arils is due to their high nutritional value and flavor. “Anything that tastes good and is good for you is going to show constant growth,” she says.

In 2014, Bloom Fresh redesigned its clamshell packaging and label, and relaunched the product in a 4.4-oz. grab-and-go cup with a spoon included under the lid. The company also offers a 2.1-oz. cup and a 2.2-pound bulk bag to its line. “We import our pomegranate arils from India several times a week because they have year-round supply and a unique variety that has a deeper red color and sweeter flavor than some of our domestic varieties grown in the United States,” says Katzman.

Besides being delicious, pomegranates are very healthy. POM Wonderful invested $40 million into ongoing scientific research to explore the potential health benefits in the areas of sports performance, memory and cognition, inflammation reduction, fetal health and gut health. Researchers have found pomegranates to be an excellent source of antioxidants. With consumers interested in healthy, tasty snacks, pomegranates seem like a perfect fit.

“They don’t sacrifice flavor for health, allowing buyers to feel good about what they are eating,” says POM Wonderful’s Cooper.

So, why do pomegranates lag behind many other produce items?

“Extracting the seeds can be a messy process,” says John Forry, principal of DJ Forry, Pismo Beach, CA. Forry says when people become aware of techniques to extract the seeds they become more comfortable with it and can do it with relative ease. So, a significant challenge in growing the pomegranate market has been the difficulty people have eating them.

Pomegranates are popular in the Middle East and South America, as well as Korea and China. They grow best in tropical-like conditions. However, to expand their popularity in America, the burden of extracting the seeds needed to be overcome. According to Heffernan, a machine was developed in 2007 to seed the whole pomegranate. “This took the intimidation element of eating the product away,” he says.

The machine led to the creation of the aril — the seeds within the pomegranate — market. “Produce department dollar growth was relatively flat with only 0.4 percent growth. However, POM POMS (arils marketed by POM Wonderful) were on fire with 30 percent dollar growth, which contributed to 7 percent of produce department growth,” says Cooper. It also opened the product up to a new audience. “It’s allowed us to reach a broader audience from younger, on-the-go consumers to families. The grab-and-go convenience of a 100 calorie healthy snack is appealing.”

The aril market is growing the overall pomegranate market. “We’ve taken the bad part about eating a pomegranate out of the mix,” says Katzman. “I expect to see much more growth in the years to come.”

While pomegranates remain particularly popular with those who grew up on them, they have also become popular with higher-income women living an active lifestyle who are looking for simple, easy and convenient ways to eat healthy.

“Someone who is afraid to try and open the pomegranate will buy the arils,” says Jeff Simonian, president of Simonian Fruit Company in Fowler, CA. “If they like the product, they may consider buying it both ways, but the die-hards buy the whole fruit.”

Forry refers to those who buy the arils as “the fast and the furious. They’re trying to figure out how to eat better, and this item falls into the category as it’s a healthy positive alternative.” He also notes consumers who purchase arils want instant satisfaction and are not as price sensitive. Arils do cost more than the whole fruit due to the cost of extraction and packaging.

Wonderful pomegranates are in season from October to January, making the holiday season key consumption periods. However, more than for a particular holiday, pomegranates are known as a fall fruit (despite the extended season due to imports).

“Pomegranates are unique in the fall season, as are persimmons, which have a similar season. Putting them near each other along with other fall fruits like pears and apples, which don’t have to be refrigerated, is a good idea,” says Schueller.

One way retailers can educate consumers is through point-of-sale and point-of-purchase materials. Bloom Fresh uses both print and digital platforms to grow its aril sales. The company utilizes in-store point-of-sales material and runs ads with customers. “We support many charities that focus on healthy hearts and children,” says Katzman. “And we send samples to these events to show everyone that eating healthy also means eating something delicious.

SunnyGem’s point-of-sale material includes instructions on how to open pomegranates. In addition, the company has created displays and branded endcaps.

Simonian Fruit Company is also trying to educate consumers. Simonian says it spends time showing retailers how to open pomegranates. The company also includes a booklet illustrating a three-step process on how to open them along with recipe cards. Simonian suggests selling pomegranates in bulk bins. “Having a pomegranate cut open and showing the inside helps people to get a better idea of them as well,” he says.

Heffernan suggests placing pomegranates in multiple areas and cross-merchandising them. “They can be put in the refrigerator case of fresh produce, in the gourmet section and the ready-to-eat section,” she says.

Like Heffernan, Cooper says pomegranates should be in multiple sections of the grocery store. “Because POM POMS are seasonal, consumers might not remember to put them on their list. Help them out by putting them where it’s convenient for them to find them, such as in the berry cooler, cut-fruit section, grab-n-go healthy coolers and anywhere else in the store where consumers are looking for something healthy, delicious and convenient.”

Bin displays and cartons are also essential to driving increased volume for fresh pomegranates. POM Wonderful has merchandising tools, including tear pads with coupons, balloons and signage that call attention to the benefits, shows what the fruit looks like inside and how to open it.

While Tjerandsen acknowledges that selling pomegranates is a challenge, he also believes they have a number of unique attributes, including color, no trim requirement, little shrink and can be in a stand-alone display, as they require little labor. One big advantage pomegranates have over other items in the produce department is they last. When a customer buys a pomegranate, he/she can store it in the refrigerator for a month. Arils have a shorter life span, lasting approximately five days in the refrigerator.

After a downturn year last year due to weather, pomegranates are poised to reach their highest level of production. As consumers become more comfortable with the item, grocers are going to need to find more space.