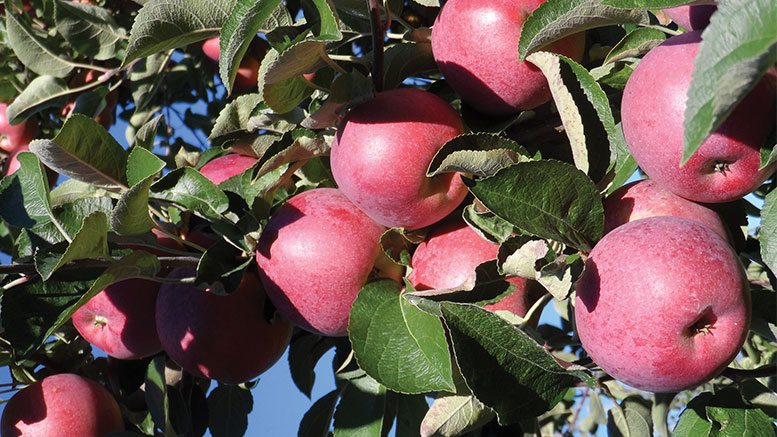 According to the New York Apple Growers Association, Fishers, NY, the Empire State is the second-largest apple-producing state in the country, averaging 29.5 million bushels of production annually grown on about 41,000 acres in six major production districts around the entire state. The top 10 varieties in terms of production are: McIntosh, Empire, Red Delicious, Cortland, Golden Delicious, Rome, Idared, Crispin, Paula Red and Gala.

“The traditional McIntosh, Empire and Cortland have loyal followings,” says Tim Mansfield, director of sales and marketing at Sun Orchard Fruit Co., Burt, NY. “The local effect on New York state apples is strong due to the large population in New York and the Northeast. ‘Local’ remains a very important piece of the state’s apple marketing strategy.”

Sun Orchard is a fourth-generation, family owned company shipping a half-million cartons of apples per year out of the Lake Ontario fruit plain in western New York.

The McIntosh is an aromatic cool weather variety grown in the state since John McIntosh discovered the first seedling back in 1811. Cortland is an all-purpose apple developed by state agricultural researchers in 1898, and Empire is a newcomer, born when Cornell University researchers crossed McIntosh with Red Delicious in the 1940s.

Cornell University’s apple breeding program is one of the largest fruit breeding programs in the world, having released more than 65 apple varieties, with RubyFrost and SnapDragon the latest varieties.

RubyFrost, which ripens later in the fall, has gained favor since first marketed in 2013 for its color, crisp texture and blend of sweet and tart flavors. SnapDragon gets its juicy crispness from its Honeycrisp parent; it has a spicy-sweet flavor.

Fowler Farms has been shipping out of western New York since Van Rensselaer Fowler bought his first 80 acres south of Lake Ontario in 1858.

With 694 commercial apple growers, the state will likely never regain its position as the leading apple producer it enjoyed until the 1940s. But nonetheless, New York apples serve distinct markets, each worth a merchandising strategy, among consumers wanting fruit from across the road, down the highway or within the region.

“To draw consumers in, first highlight New York state apples’ localness and regionality,” says Haskins. “Research tells us consumers are more motivated to buy local than they are to buy organic. And what constitutes ‘local’ is flexible in many consumers’ minds.”

Once you have their interest, the next step is to give consumers a sense of the flavor they will enjoy if they make the purchase. “To close the deal, appeal to their taste buds,” says Haskins. “Remind them about each variety’s flavor profile, and show them how to select and store an apple properly to get the best eating experience. Hint: refrigerate them at home; don’t put them out on the counter. Consumers think because retailers don’t refrigerate apples on display, they don’t need to either.”

“We have some customers as far away as Florida who want us to emphasize that these are New York apples.We even have export customers in Israel and Asia who want to promote them as being from New York.”

Finally, to seal the deal, let them meet the farmer who produced the apples. “To put icing on the apple cake, introduce them to the growers,” says Haskins. “These days, consumers want to know who and where their food is coming from, and that they can trust us.”

A significant percentage of the country’s population lives in states bordering New York, and many people think of the orchards in the western part of the state as “local.”

“The closer you are to the Northeast area, the New York apples become very prominent; it is perceived as home-grown or local,” says Jim Allen, vice president of marketing for New York Apple Sales, Albion, NY. “When you get into the Midwest or South, there is a lot of competition from the West.”

Williams says the opportunity to expand “local” exists as more consumers move away from New York and neighboring states to the south and other areas outside the Northeast to retire. “Many people we speak with love New York apples and harken back to their younger years enjoying a Fowler Farms apple,” he says.

“We have some customers as far away as Florida who want us to emphasize that these are New York apples,” says Ward Dobbins, chief executive of United Apple Sales, Lyndonville, NY. “We even have export customers in Israel and Asia who want to promote them as being from New York. But some retailers in other parts of the country want more of a generic approach because they are buying from a number of states.”

There are many resources available for retailers who want to merchandise New York apples as “local.” The New York Apple Association provides retail promotion programs for supermarkets by supporting retailers with its Apple Country display, feature ad and volume incentive programs and impactful point-of-sale materials.

“‘Buy local’ is the most important message in our marketing toolbox,” says the New York Apple Association’s Haskins. “New York state has the advantage of being local to the largest consumer market in the country, New York City. And we are a day’s drive to every major market on the East Coast. We can meet every apple or cider need.”

“People look for the most popular varieties, regardless of where they are from,” says Allen. “That would be Honeycrisp, Fuji and Gala. For people looking for older heritage varieties, it would be McIntosh at the top, followed by Empire.”

“Gala, as a percentage of the whole, cont-inues to increase,” says Mansfield.“Honeycrisp plantings continue so that variety is building volume, but may be down some this next season due to a poor set. Gala is popular and Honeycrisp demand keeps growing.”

Sun Orchard is collaborating with Honeybear Brands, which started as a small orchard in Minnesota and has expanded through arrangements with selected growers throughout the Western Hemisphere, to merchandize the next generation variety. “We are working with Honey Bear Marketing, Brewster, MA, marketing a new club variety called Pazazz, a descendant of Honeycrisp,” says Mansfield. “Pazazz has an excellent sweet/tart/tropical flavor that lingers on the palate throughout the eating experience.”

Pazazz was introduced in 2015 and will have a national brand rollout this year. The apple is an unusually sweet cross between Honeycrisp and an unknown parent, and is suitable for growing in many locations.

Even where New York apples are not considered “local,” they may still be considered to have special quality because of where they are grown.

“Apples grown in New York have excellent flavor and long storage life due to the soil and climate,” says Allen. “Call them out at retail, use the POS material and other tools provided by the New York Apple Association.”

Fowler Farms’ Williams suggests pointing out the differences in quality and taste, and to build displays and communicate at the point of purchase via sales materials.

Because New York growers are learning to produce more apples on the same amount of ground, they are harvesting larger crops.

“Over time, our state’s apple production has been gradually trending upward, and we expect that will continue for the foreseeable future,” says Haskins. “This is largely due to the smaller footprint trees grown in today’s modern apple orchards; they produce more fruit per acre than their larger predecessors. Growers are increasingly choosing to irrigate those orchards, which also increases production per acre and reduces some of
the vagaries that relying on Mother Nature can bring. And our growers are simply planting more trees of the varieties consu-mers tell us they want.”

With more apple production, packers like United Apple Sales are investing now so they are prepared to ship more apples. “We’re starting a brand new packing line,” says Dobbins. “We’re doubling our sorting ability, and looking forward to a great season. There are more highly colored Honeycrisp, early Honeycrisp and higher colored Fuji,
in addition to Snapdragon and Ruby Frost.”

This year’s crop should be, by most accounts, about average in total volume, but well above average in size, according to Dobbins.

“The volume of the crop is going to be similar to last year,” says Dobbins. “Between 30 and 32 million bushels is normal; 27 to 28 million is the early projection for this year. We expect fruit size to be larger. With the fruit size large, more will go to the fresh market as opposed to juice. The quality
is generally good. There are a few orchards with problems, but it’s generally pretty good.”

New York Apple Association’s Haskins agrees. “We have generally had ample sun, average temperatures and appropriate moisture, so the fruit has been sizing and coloring on the trees all summer right on schedule,” she says. “By the time this edition of Produce Business hits mailboxes, the crop across the state will be coming off the trees and heading to market. And the only thing that is looking average about this year’s crop is its volume — literally. We’re on track to produce a crop that is on par with our five-year average. So this year’s crop should be not too big, not too small, but just right.