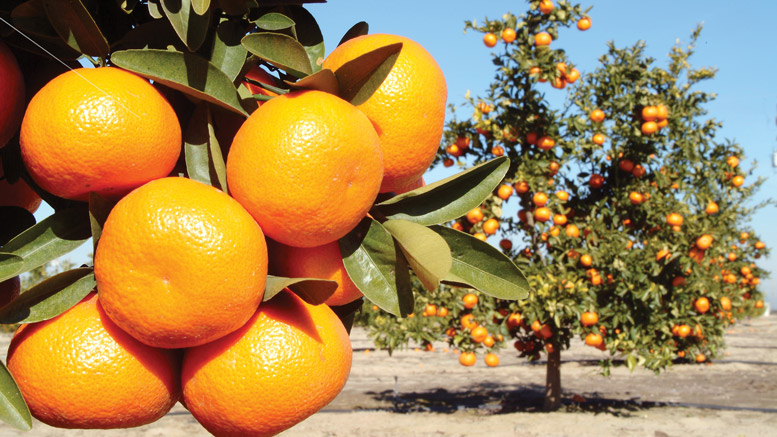 Growth of the easy-peelers has been staggering, and it’s still growing.

Mandarins bring a bit of whimsy to the produce department with names such as Halos, Cuties, Dimples, Darlings and Delites.

But don’t let the cute names fool you because, when it comes to battling for market share, these delightful darlings with dimples are all business.

“Consumer demand for mandarins is skyrocketing, now representing more than 45 percent of the citrus category,” says Christina Ward, director of communications at Sunkist Growers, Valencia, CA. “Sunkist Delite mandarins, which launched last year, tripled in sales in its first season, making it one of the leading brands in its category.”

The Delite variety, originally introduced by Orange Cove, CA.-based Mulholland Citrus as the first California mandarin, continues to grow in popularity because “they’re a well-rounded snack: sweet, seedless, easy to peel and perfect for the on-the-go lifestyle,” says Ward. “Mandarins are packed with flavor and vitamins, making them a fan favorite for people seeking healthy snack alternatives.”

“The demand for sweet, seedless and easy-to-peel mandarin varieties has become more than a trend, it has become a lifestyle choice for consumers.”

Although a large majority of the mandarins sold in the U.S. come from California’s Central Valley, imports also have grown significantly, with China, Turkey and Morocco the largest global exporters.

California growers harvested 260 million pounds of mandarins, tangerines and tangelos in the winter of 2006-2007, according to California Department of Food & Agriculture statistics, but just nine years later, the total stood at more than 1.7 billion pounds and was still rising.

With a number of varieties extending the season, Golden State growers produce more than 90 percent of the mandarins harvested in the country, and these shippers expect the market to keep expanding.

“We anticipate consumption for easy-peel varieties to rise during the spring and summer months,” says Monique Bienvenue, director of communications at Bee Sweet Citrus, Fowler, CA. “The demand for mandarins remains steady.”

Bee Sweet, a 30-year-old citrus grower-packer-shipper that ships from California’s Central Valley throughout the U.S., Canada, 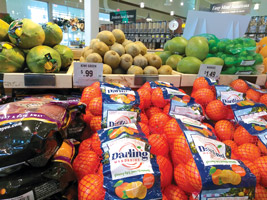 Europe, and the Pacific Rim, includes in its sequence of offerings Satsuma, Clementine, Page, Murcott and Gold Nugget mandarins.

Easy-peeler mandarins benefit from checking boxes for many megatrends as they are convenient, healthy and just the right size for a snack or a child’s lunchbox.

“The demand for sweet, seedless and easy-to-peel mandarin varieties has become more than a trend, it has become a lifestyle choice for consumers,” says Adam Lazo, senior category director of sales at Wonderful Citrus, Los Angeles. “There are some key macro consumer trends that may be contributing to rising demand. Fifty percent of eating occasions are now snacking, and 70 percent of Americans admit ‘they could be healthier, so more consumers are seeking healthier snack options. According to the Nielsen Total Food View Report in June 2018, Americans spent nearly $178 billion on fresh foods in the past year, including fruits like mandarins that are easily snackable.”

Wonderful Citrus commands a slight majority of the mandarin category with its trademarked Halos brand, which accounted for more than a quarter of all the growth in the entire produce department last season, according to company figures.

“Halos contributed 27 percent of total produce dollar growth last season, indicating continued strong demand for mandarins,” Lazo says. “There is no need to refrigerate because they can remain at ambient temperature. They are easy to transport, not fragile, have good value and are healthy.”

Sun Pacific of Pasadena, CA, rivals Halos with its Cuties brand, the name the company first gave to the Spanish mandarin trees it planted south of Bakersfield 20 years ago; Cecelia Packing out of Orange Cove, CA, has a mandarin named Dimples; LGS Specialties, New Rochelle, NY, imports Darling Clementines; Sunkist has its Delites; and Bee Sweet’s mandarins are branding with the company’s cute cartoon bee.

There are stories behind each of these whimsical names that could be combined into a volume of fairy tales.

“Different sizes of fruit can cater to various meals and culinary needs. While schools prefer smaller sizes, we’ve noticed that consumers enjoy having a wider range of sizes to choose from.”

“We named our mandarins Halos because when we thought about things that are perfect, we thought of angels,” Lazo said. Angels wear Halos and embody pure goodness.

There is nothing fake or artificial about Halos. The product is also connected to childhood happiness – and childhood innocence and cheerfulness, which enhances its aura. It’s these intrinsic values that often lead to the sweet, innocent brand names we now see in marketing mandarins.”

The major mandarin shippers are competing for the attention of children, or of the grownups who supply them with food, and their brands drive retail sales. 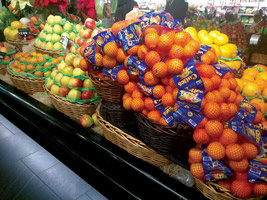 Once you have their attention, it helps to offer consumers choices in the size of both the fruit and the pack.

Mandarins have gained favor, in part, because they fit far better in a child’s hand than the Navel oranges they are coming to replace.

Although smaller is generally better, it is advisable to offer consumers a choice of easy-peeler fruit that is a bit larger.

“Different sizes of fruit can cater to various meals and culinary needs,” says Bienvenue. “While schools prefer smaller sizes, we’ve noticed that consumers enjoy having a wider range of sizes to choose from.”

There are also emerging standards when it comes to the standard size packs for mandarins.

“Across the industry, the 2-pound bag has become the fastest growing pack, with sales quadrupling since the 2015 season,” says Ward from Sunkist Growers.

In the size of the pack, as with the fruit, it makes sense to offer consumers a number of choices.

“Halos are sold in 3- and 5-pound branded bags and 5-pound boxes that appeal to shoppers’ preferences for convenient, grab-and-go packaging,” says Lazo.

The mandarin season begins well before Thanksgiving and continues until the first grapes and stone fruit begin to ship in the late spring.

“Demand picks up at the beginning of February through April,” says Lazo. “We see increased demand during the week of Super Bowl for consumers looking for healthy snacks. Retailers take advantage of this increased demand by providing additional floor space for in-store displays and signage. Retailers are also often running ads/promotions throughout the winter season to keep mandarins top-of-mind and in shopping carts.”

Although counter-seasonal imports make it possible to offer mandarins virtually year-round, California growers have developed a sequence of varieties that make them able to ship fresh fruit during the entire peak season from November to May.

“The outlets that have the most success with mandarins are those that commit to the California season and stay focused on the category,” says Lazo. “These retailers start strong with California mandarins as soon as the season begins; they are consistently putting mandarins in print ads and offer ample floor space to build large, cart-stopping displays. Retailers that stay true to branded mandarins are likely going to see incremental velocities of up to twice that of non-branded.”

GET THEIR ATTENTION AND THEY WILL BUY

Because consumers generally know how deliciously sweet mandarins are, merchandising comes down largely to getting their attention.

The whimsical names and cartoon characters help and so, too, does a display that lets you feel the convenience of this fruit.

Some of the larger shippers have developed merchandising campaigns that include in store displays guaranteed, almost, to attract attention.

“Sunkist launched its ‘Fresh from the Grove’ Delite mandarin secondary display bin in select markets last year,” says Christina Ward, director of communications at Sunkist Growers, Valencia, CA. “The new unit is making its nationwide debut this season. It has a farmers’ market feel. It’s the perfect solution for retailers who want to increase selling space within a small footprint, as it can hold up to three cartons of 2- or 3-pound bags. We also have the ability to customize promotions and point-of-sale materials to fit our customers’ needs.”

Wonderful Citrus, Los Angeles, meanwhile has invested $30 million in a promotional effort aimed at keeping it in the category’s top spot.