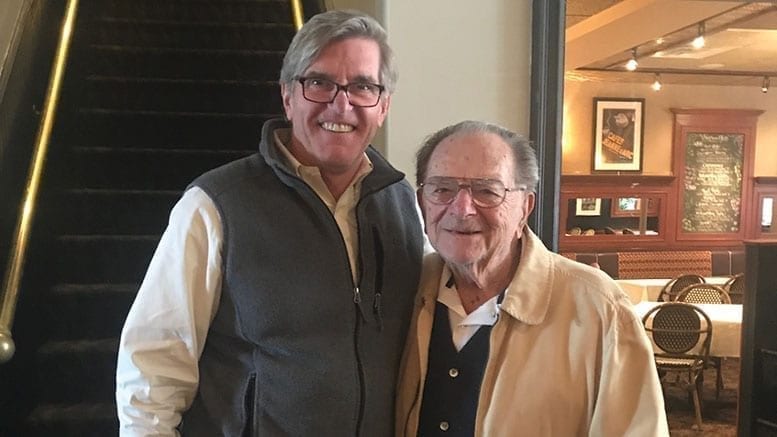 In 1979, Raymond Signore joined D’Arrigo Bros. Co. of New York to manage a newly formed specialties department at the Hunts Point Market. A few years later, he offered his mentorship to Luke Sears as a sales person, and “the rest is history,” says Sears, of the memories evoked by the old photo, taken around 1984, midway through their tenure together at D’Arrigo’s.

Sears, president and owner of LGS Specialty Sales in New Rochelle, NY, which he started in 1990, says, “I try and have lunch with Ray every year. He’s 93, and will be 94 in March, living in Rockaway, NY. The most recent photo was a picture of us at lunch last year, in April 2019.” Ray and Sears catch up on how blessed they’ve been both in their business and personal lives; Sears has five kids, with his son Jake at LGS, he notes, making sure to double check with Ray on the breadth of his family of 4 children, 8 grandchildren and 18 great-grandchildren.

Ray’s father, who immigrated from Italy, had a spot on the old Washington Street Market for his company, Benjamin Signore & Sons, before moving to Hunts Point. The company specialized in Belgian endives, French shallots, etc. One of the reasons Steve D’Arrigo brought Ray into the D’Arrigo fold, according to Sears, was the B&W Watercress account, a popular label that was sold in Hunts Point by a few other houses.

More impressive, Ray capitalized on his multi-lingual talents, speaking English, French, Italian and Spanish. “The great thing about working with Raymond was that he was a great mentor and inspiration. Ray was so willing to experiment, he understood different ethnic backgrounds and the variety of cuisines each encompassed, to find niches and sell across the gamut of retail independents, purveyors and restaurants that filled the New York Metropolitan area,” say Sears. “Every night at 3:00 in the morning, we would go to Chinatown and bring back 2,000 pounds of bean sprouts and tofu,” he adds.

During that time period, a lot of specialty items were being imported, such as colored peppers from Holland, Spanish Clementines, and Italian radicchio. “A simple thing like a direct connection with Fairway Market allowed us to sell the first Hass avocados in New York to reach a more mainstream customer in the late 70’s, and we built a ripening room for Hass avocados back in the 80s,” says Sears, noting how many of these items are now mainstays.

Other companies on the Hunts Point Market carried some specialty items, mixed into their assortments, but what was unusual about D’Arrigo was Steve D’Arrigo’s decision to build a separate specialty department, as opposed to having it as a sideline. “It was the smallest department in the company but began to grow exponentially,” says Sears. “My experience with Ray is part of the reason why I opened my own business, focused on Spanish Clementines and avocados, among other imported items.”

Blast from the Past is a regular feature of Produce Business. We welcome submissions of your old photos, labels or ads. Please send your material to editor@producebusiness.com.