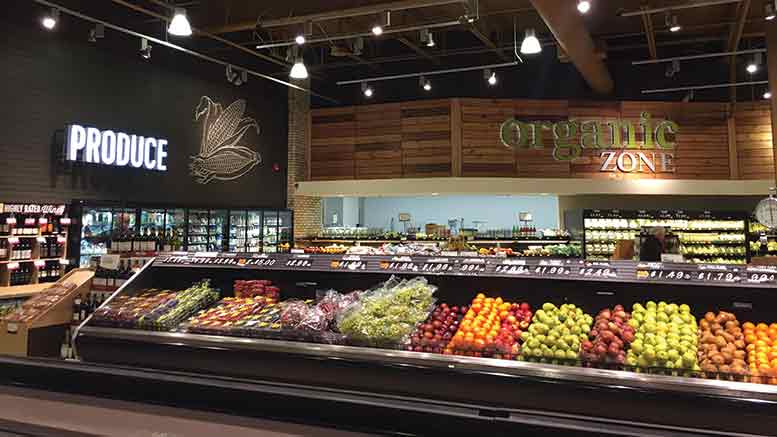 With a passion for produce, this successful fourth-generation business keeps evolving. 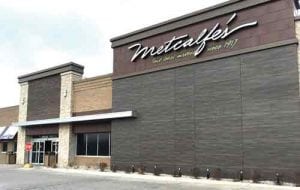 Metcalfe’s Market is a fourth-generation, family-owned-and-operated neighborhood market where, according to Lisa Grudzielanek, assistant director of operations and registered dietitian, produce and other perishables are a front-and-center success. The market, which has three locations in Wisconsin, is known for its bounty of local, premium produce.

“Today, [owners] Tim and Kevin continue to focus on the company’s steady growth and commitment to providing total customer satisfaction while offering only the best to the customers of Metcalfe’s Market,” says Grudzielanek.

A century in the making

Although the store is growing and modernizing at a great pace, it’s more than a century old. Started in 1917 by Henry and Teresa Hess (Tim and Kevin Metcalfe’s great-grandparents), the original store was built in Butler, WI, a suburb of Milwaukee. The family lived on the second floor of the store and rented the store areas to the Milwaukee Cooperative Association, a co-op grocery store. Twenty years later, Henry sold the store to his son-in-law, Vern Metcalfe, and the Metcalfe name was born. The second store location in Hilldale, on the west side of Madison, WI, was opened in 1979.

It was Tom Metcalfe, Vern’s son and Tim and Kevin’s father, who began to expand the stores and modernize facilities to meet the needs of his growing customer base. He remodeled the Hilldale store, adding more than 10,000 square feet, while doing major renovations. In 1991, the store was bestowed with its first honor, “Best Store in Madison.” This was the first in a long line of awards that Metcalfe’s stores have won over the years. They won “Best of Madison” in 2012, 2013, 2014 and 2015. Brothers Tim and Kevin also have won international awards for store design and lighting. 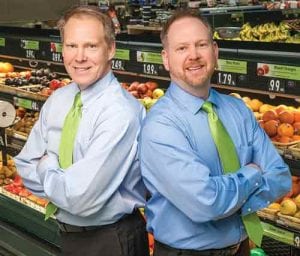 Tim and Kevin Metcalfe purchased the business from their father, Tom, 18 years ago. Since then, the stores have become 100 percent green powered, offsetting all of their carbon dioxide emissions from electricity use by purchasing clean, renewable energy.

The company also has expanded and now employs more than 600 employees. The stores began to offer online shopping in 2001, and today customers can shop online and pick up or have their groceries delivered. Tim took on the role as president of grocery operations, while his brother, Kevin, focused on the family’s real estate development holdings, opening the third store location in 2003.

Throughout the expansion, produce has been a central point of the store’s growth. The 10,000 square foot produce department is sourced mostly from Heartland Produce in Kenosha, WI and W. Newell & Co. in Champaign, IL.

“With our large selection of organic, local and unique produce items, we offer a fantastic selection. The quality of our produce is a differentiator for us,” says Grudzielanek. “We consistently receive feedback from our customers that one of the many reasons they shop with us is our high-quality and beautifully arranged produce department.”

Great merchandising and displays consistently draw customers in the door and boost sales, attests Grudzielanek. “Our produce departments do a great job merchandising front-and-center displays that set the standard for the level of quality our customers can expect from all the produce in our department. When customers walk through the doors and see stunning, well-built, beautifully arranged and clearly signed displays, it sets the stage for an enjoyable shopping experience.”

“When customers walk through the doors and see stunning, well-built, beautifully arranged and clearly signed displays, it sets the stage for an enjoyable shopping experience.”

Simple recipes on the website such as “Metcalfe’s Cowboy Caviar,” made with sweet corn, black beans, red peppers, Roma tomatoes and cilantro help customers learn to cook with their produce selections. Additionally, in-store demos and events regularly on Metcalfe’s calendar have helped cultivate a local community around the business. The events include an Earth Day celebration as well as tastings on Mother’s Day and graduation, and even a floral arrangement class. 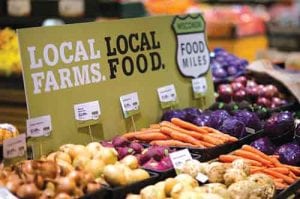 A decade ago, Metcalfe’s began to emphasize the importance of local foods and the distance foods traveled from farm to table, which is a boon for customers who relish the premium produce selection. What’s more, 20 percent of the produce is organic.

“We are passionate about ‘bringing local home.’ Local produce at Metcalfe’s Market means produce grown in Wisconsin,” says Grudzielanek. “We highlight local products in our stores with mileage signs. These signs denote how many miles the food traveled from the field to our stores. Customers really love easily determining where their food came from and how far it traveled with our mileage signs.”

While the owners have been focused on the importance of emphasizing the premium quality of their foods and the importance of reducing their impact on the environment, they also understand that price matters, especially in this increasingly competitive market space.

“We’ve heard from our customers, price is an important factor when purchasing produce. The grocery market is more competitive than ever,” says Grudzielanek. “It is ‘ripe’ with competition. We are working closely with our vendors and producers to remain competitively priced.” Each month silver balloons hanging throughout the store highlight “Metcalfe’s monthly deals,” which are laid out in an easy-to-access online circular.

Grudzielanek notes tropical produce is also important to customers. “We carry an assortment of tropical fruit such as mangos, dragon fruit, and papayas when they are in season. These fruits are not as popular as staples such as bananas, apples and oranges. However, pineapple is popular year-round and jackfruit is growing in popularity, more so in the ready-to-eat varieties.” Bananas and avocados are the top-selling items in the produce department, along with strawberries and blueberries.

The attention to detail and emphasis on keeping its growing customer base happy has allowed the company to survive and thrive a century later. From its humble beginnings as a co-op through its steady growth into three store locations, Metcalfe’s continues to demonstrate that quality in the produce department is a marker for retail success.