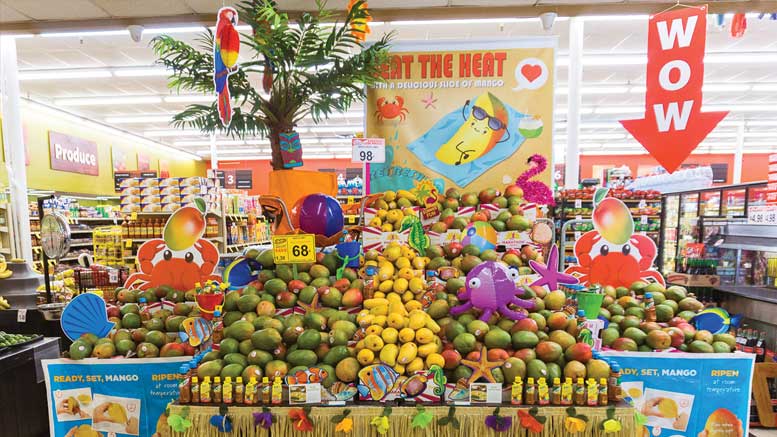 Season now stretches from January to September and provides 60 percent of all imports to the United States.

Mangos were once an unfamiliar fruit to American consumers. That’s changing. “Since 2005, mango volume has increased more than 76 percent,” says Angela Serna, communications manager for the National Mango Board, a research and promotion organization headquartered in Orlando, FL. “Specifically, weekly store volume has improved from 132 units per store per week in 2005, to 227 units per store per week in 2016.”

Tropical mangos don’t grow well in most parts of the United States. As a result, the majority of fresh product comes from Mexico. According to the U.S. Department of Agriculture, Mexican farmers provide 60 percent of all imports to the United States. Peru is a distant second, followed by Ecuador and Guatemala.

That means it’s likely you’ll be merchandising Mexican mangos to consumers most of the year. The season stretches from January to September. The outlook for this year’s harvest is promising. “We expect a good crop,” says Jerry Garcia Sr., vice president of London Fruit, a Pharr, TX-based company that’s one of the oldest mango houses in the United States. “There’s been no rain to affect the cosmetics.” The cold snap that hit the southern United States in January doesn’t appear to have affected growers.

Although shoppers are interested in purchasing local products when they can, produce managers say shoppers seem unfazed by the idea of buying Mexican mangos. “I think they’re in the same category as bananas,” says Keith Cox, produce category manager at Food City, an Abingdon, VA-based chain that operates stores in Virginia, Georgia, Tennessee and Kentucky. “Most people understand they don’t come from the United States. We’ve never had any complaints about mangos coming from Mexico.”
So go ahead and give in to Mexican mango mania. Putting mangos front and center in the department, offering them at the right price and continuing to educate shoppers about them can lead to increased sales.

The biggest reason for the surge in mango sales is the growth in consumer awareness. “The National Mango Board has done an excellent job of providing information and materials,” says Cox. “They have display bins that tell people how to choose a mango and how to cut one, with graphics right there on the display bin. Plus they provide recipes. There’s been very good education for the consumers.”

“There’s a lot of material about the nutrition starting to emerge, and that is a driver for a lot of consumers,” says Maroka Kawamura, program and category manager for produce, bulk and floral at New Leaf Community Markets/New Seasons Market, which is based in Santa Cruz, CA, and has seven locations in the northern part of the state.

Mangos have been called a superfruit because they contain more than 20 vitamins and minerals, including folate and vitamins A, B6 and C. They’re high in fiber and have no cholesterol, sodium or fat.

The interest in mangos does depend somewhat on the region. The National Mango Board’s 2016 Market Index Report shows the West South Central sub-region of the United States showed the strongest growth in mango sales. (Texas and Arizona have long been strongholds for mango sales, as has California.) Four other sub-regions saw marked increases, including the New England area. The two regions that showed declines were the Pacific and Mountain sub-regions.

According to a recent Attitudes and Usage Study by the National Mango Board, non-Hispanic white Americans make up the majority of mango purchasers. Hispanics, African-Americans and Asians are the next largest purchasers. People from parts of the world where mangos grow naturally, including Mexico and India, are an easy audience to target because they already understand how to prepare and cook with mangos, says Garcia. However, people born and raised in the United States represent a large group that can be converted to the benefits of eating them. 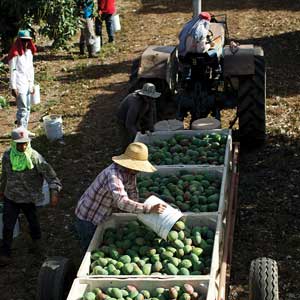 Mexican mangos begin coming on the market in mid-January and last through September. “Mangos out of Mexico are mostly Tommy Atkins, Ataulfos (honey), Kents, Keitts and a few Hadens,” says Gary Clevenger, co-founder of Freska Produce International, an Oxnard, CA-based company that sources mangos from all over the world. “Tommy Atkins are the most popular but not necessarily the best eating. The best eating in my eyes are Kent and Keitts for the creamy texture and sweet flavor.”

Industry professionals say honey mangos are showing big growth. “I’d say they’re currently the ones that have gained the most popularity,” says Garcia. “That’s the fruit of the future.”

Most consumers don’t know the difference between the different varieties of round mangos, even though there are notable differences in their skin color and flavor. This makes it easier for stores to sell whatever is available at the moment. “Since some varieties are seasonal, shoppers tend to buy what is in store,” says Serna with the National Mango Board. “Retailers are encouraged to carry multiple varieties and sizes if available to give shoppers more options.” It’s also a good idea to emphasize mangos are available year-round and are no longer a seasonal treat.

Spring is an ideal time to merchandise mangos because berries and other summer fruits aren’t available yet.

“Sometimes it’s nice to walk into the stores and see something very tropical and colorful when you’re just coming out of winter,” says Chris Ciruli, COO of Ciruli Brothers, a grower/shipper of mangos and multiple other fruits and vegetables. The company’s headquarters is in Tubac, AZ. “You can be writing promotions in March when the weather is still terrible. It gives shoppers that appeal that we’re headed toward spring and better things are coming.”

Retailers have honed in on price points that cause mangos to fly off shelves. “An everyday good price is two for $3,” says Cox. “We run them in the ad for 99 cents. When there’s a really good supply we’ve actually had mangos on the front page of the ad at 69 cents apiece. There have been times when we’ve done ads at 10 for $10 and five for $5.”
“We stay below $2.50 each for a Tommy type and $1.99 for an Ataulfo,” says Kawamura. “It can vary through the season, but the sweet spot for us is $.99 for an Ataulfo and $1.49 for Tommys. That’s when we try and promote them.”

“Mangos are sold per-each, so a regular display seems to work best at the retail level,” says Michael Nienkerk from Splendid By Porvenir, a San Bruno, CA-based produce distribution company that specializes in mangos. “We have experimented with specialty packs such as clamshells or smaller box sizes and net-bags, but they do not seem to make a difference.” 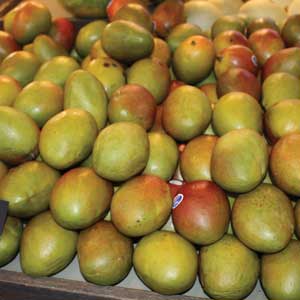 Although consumers are much more familiar with mangos, education is still critical to increasing sales. “It is not a dislike of mangos that keeps people from trying fresh, whole mangos,” says Serna. “They are simply overlooked and, some are still intimidated by them.”

“Use POS materials that help explain how to cut them,” says New Leaf’s Kawamura. “The ‘hack’ of peeling a mango with a pint glass is a really fun one that is easy to demo, and people get really excited about it. I’d say try that in the backroom with your employees and have them talk to customers about it.”

Picking mangos is another barrier to purchase that stores can help shoppers overcome. “Tell consumers not to ‘buy with your eyes,’ ” says Nienkerk. “People want pretty fruit and the best mangos are not always the prettiest. One thing the National Mango Board tries to push is to judge a mango by smell and touch. If it smells good and has a slight give, it is a good mango. Color is not the best indicator.”

Many consumers don’t know how to cook with mangos, so providing recipes can help. “They can be used for all meals: breakfast, lunch and dinner,” says Freska Produce’s Clevenger. “Also, a mango is not like an avocado, where it has to be ripe to eat it. You can eat a mango hard or soft.” Recipes for dishes such as green papaya salad will get consumers thinking about mangos in a new way.

“Mangos are a popular item during Cinco de Mayo and throughout the summer months,” says Jiovani Guevara, commodity manager for Robinson Fresh, a global produce marketing and distribution company based in Eden Prairie, MN. “Tie-ins with tomatoes, cucumbers, pineapple and limes give options to easily create salsas and smoothies. If sales of mangos begin to exceed supply, reduce the size of the display and move the item back to its modular home.”

The fruit can also make a fun snack. “This is not my invention, but put them on a stick like a popsicle, lightly score the mango vertically, peel back the skin like a banana, and eat away and get messy,” says Ronnie Cohen, vice president of sales for Vision Import Group, a produce importing company based in Hackensack, NJ. Here’s another easy idea to encourage consumers to cook with them: “Substitute mangos with any stone fruit recipe you have.”

The other key to merchandising mangos is to keep them front and center in produce. “We always try to promote mangos year round, especially if the retail is reasonable,” says Cox. “For most of the year we’ll have a secondary display location just to keep them in front of people. The bins we’ve used have been instrumental in helping promote them. We like to get consumers used to purchasing mangos like they would bananas — on a weekly shopping trip, for example. To do that we’ve got to keep displays out as much as we can.”

Ciruli adds, “We’re still in a boom period for mangos. It’s still an up-and-coming fruit. The hardest part is to get produce people to understand it’s no longer a specialty item or a small display item. It can be an endcap or a large display like Cuties or Halos. The bigger you build those displays, the more appeal they have when you walk in the door.”

There’s some debate about whether mangos should be merchandised with tropical fruit or more mainstream varieties. “With this continued growth, retailers often pull mangos from the tropical sections into the main displays of the produce department, as well as to the front of the store,” says the National Mango Board’s Serna. Clevenger notes mangos often do well when merchandised with stone fruit.

However, Kawamura still finds mangos sell best when placed with bananas, pineapple and coconut. “They also do nicely with avocados, especially for those ‘holidays’ such as the Super Bowl or Cinco de Mayo,” he says.

“We have found that retailer demonstrations with Tajin, a spicy seasoning that goes well with mangos, have been effective in helping to promote mangos,” says Guevara.

To help boost mango sales even more, make sure the fruit stays in prime shape. “Treat it like a banana,” says Vision Import Group’s Cohen. “Don’t keep mangos at temperatures that are too cold or co-mingle with all other produce items.”

Garcia with London Fruit says it’s best to merchandise ripe fruit whenever possible. “Have it on the shelves ready to eat,” he says. “We do this with a couple of chains: we color-sort our honey mangos, and when they get to the store they’re full color. You can bite into one and it’s ready to eat. Some stores put them out when they have a touch of green. Shoppers take one bite and they never buy them again.”

Give consumers who have had a bad mango experience a chance to discover why the fruit is winning raves. “Get out there and have those little sampling booths,” says Garcia. “Have a person who knows what they’re doing provide the right piece of fruit for them to taste.”