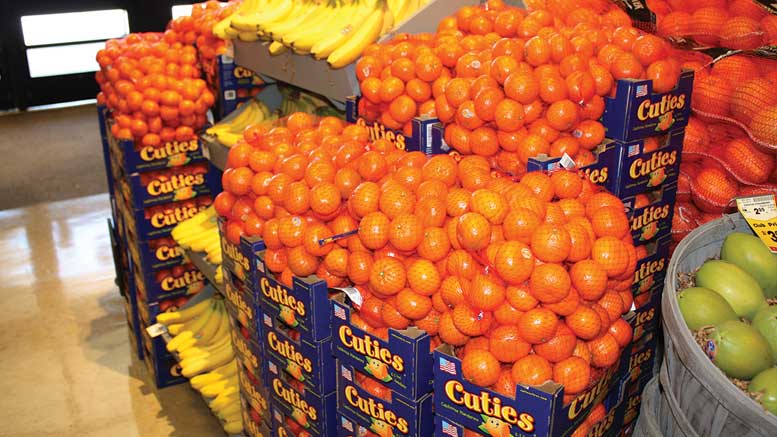 If it seems like mandarins are flying off the shelves, it’s not your imagination. The category continues to see strong movement and surges in growth.

Focusing on mandarins can reap big rewards. Produce executives can profit from increased interest in the tiny citrus fruits. This includes educating staff members about mandarins, storing them properly for maximum quality and allowing shoppers to sample their sweet segments.

“Mandarins have become a staple of the citrus category,” says Joan Wickham, director of communications for Sunkist Growers, a cooperative based in Valencia, CA. “Seedless, sweet and easy-to-peel, this nutritious segment of the category is in line with so many consumer trends. Consumers today are looking for healthy, convenient snacks that taste good –— and mandarins offer just that, naturally.”

Wickham says the popularity of mandarins has generated excitement in the overall citrus category. Because of their convenience, they are accessible. When consumers begin eating mandarins, they are more apt to try other citrus varieties to explore the various flavors the category offers, from Cara Cara navel oranges to blood oranges and Minneola tangelos. Organic mandarins, for example, are increasing every year and are up more than 60 percent from the 2016 to the 2017 seasons, she says.

Mandarins are fast outpacing their citrus counterparts. “Mandarin consumption has been growing by double-digits for many years now,” says Howard Nager, vice president of marketing and business development for Sun Pacific, Pasadena, CA. For the 52-week period ending in October 2017, dollar sales increased 8.7 percent over the previous 52 weeks. “The mandarin category is over $1.3 billion in sales,” he says. “Orange sales have been relatively flat, with sales of $800 million for that same timeframe.”

“We see a lot of upside in demand,” says Cooper. “About half the country buys mandarins, with 70-80 percent of U.S. households purchasing. Halos are a big part of that growth.”

Sales of 2-pound bags have been increasing and are up more than 40 percent in the 2017 season over the previous season, says Sunkist’s Wickham. The 2-pound bags are sometimes sold alongside 3- or 5-pound bags. “Overall, the segment seems to be leveling off some,” she says. “We are not seeing the exponential growth as in years past. However, it is still driving the entire citrus category and the largest segment in citrus.”

Because of the production and sales growth of the 125-year-old cooperative, Sunkist’s mandarin acreage increased significantly this year and doubled, says Wickham. This past fall, Sunkist launched Sunkist Delite mandarins, a fresh mandarin program that emphasizes California-grown quality and heritage.

Mandarins possess a prominent role in consumers’ shopping carts. “We can definitely say that mandarins have become a new staple in the homes of many families,” says Monique Bienvenue, director of communications with Bee Sweet Citrus, a grower-packer-shipper based in Fowler, CA. “Being that they’re sweet, seedless and easy to peel, it’s no surprise that mandarins are a huge hit amongst kids everywhere.”

Mandarins are a type of orange, although they’re treated as a distinct species of fruit. The mandarin season runs November to May, although different fruits are at their best at varying times. Besides mandarins, there are two other types of fruit in this category: tangerines and satsumas. The most popular mandarins grown in the United States are Page, Gold Nugget, Murcott and W. Murcott, with the latter two also known as honey tangerines.

“While all varieties are deliciously sweet, Page mandarins are noted for their high brix qualities,” says Bienvenue. “You can differentiate a Page mandarin based on its dark, red exterior.” Page mandarins harvest in December and January. Murcotts have been described as sweet with tart undertones. The fruit’s skin is yellow-orange to reddish-orange. Its season runs from late January to May.

Sunkist, whose cooperative members harvest from thousands of family farms in California and Arizona, offers Gold Nugget mandarins mid-February through May,. “It’s a deliciously sweet variety that gets its name from its beautiful, bright, bumpy peel,” Wickham says.

Ojai Pixies are another choice in the tangerine category. Small in size — 1 to 3 inches — they possess a light orange, pebbly skin and are easy to peel and segment. A late-season variety, fruit arrives in April and May.

Satsumas are among the first mandarins to hit the market. They become available in October and stay in stores until December. “Satsumas have a sweet aroma with a refreshing flavor that is warm and tropical,” says Wickham. “Varying in shape from flat to necked, they peel and segment easily and are seedless.”

Possessing a thick, orange-red skin that peels off easily, Clementines are the most popular tangerines. They’re typically available November to February.

The last varieties of the year, the Sumo and Gold Nuggets are bulk and the best-tasting of all the mandarins, says Jim Weber, produce director of Tadych’s Econofoods, a six-store chain headquartered in Iron Mountain, MI. “I think the gold nuggets are the best-tasting citrus available, much sweeter than the regular mandarins, and every customer I give a sample to loads up a bag,” he says.

“Consumers love easy-peel varieties and want to try more, but they need to know that these varieties are unique and special,” says Wickham. Use signage or other methods to let them know about the distinctive flavor profiles of the different fruits, she says.

The vast majority of domestic mandarins are grown in California, with Florida and Arizona a distant second and third, respectively. As the fruit has become more popular, California, in particular, has increased its plantings so farmers can keep up with demand. Although the industry may still experience an occasional shortage, expect that problem to decrease as trees mature and production climbs.

Moore suggests increasing mandarin sales by including them in weekly circulars. “We advertise whenever possible during the season because they help drive our overall produce sales and have a huge reach with our customers,” he says.

Mandarins are typically marketed in bags and boxes. It’s important to carry them in a variety of sizes. Bee Sweet packages its mandarins in 2-, 3- and 5-pound bags and 4/5 trays and 25-pound volume fills. By packaging mandarins in bags, consumers know exactly what they’re getting in terms of servings and weight, which allows them to prep their meals accordingly, says Bienvenue.

Giro bags are one of the most popular packaging types, says Wickham. The bags offer a great option because of flexibility in sizing. “The Giro also offers high-graphic real estate to catch consumers’ attention on store shelves,” she says.

One of the best ways to increase mandarin sales is to display them in multiple locations, Josephs says. Front lobbies are ideal locations. Even within the produce department, featuring 2- or 3-pound bag displays and separate 5-pound displays will lead to incremental sales.

To help capture impulse sales, during high traffic times and key holiday periods, retailers should erect secondary displays near registers. “Larger displays are important,” Josephs adds. “So make sure the primary — and perhaps secondary — displays are an eye-catching size. Also, make sure to clearly communicate the price.”

Wonderful’s Cooper recommends retailers erect displays in other areas of the store, including placing a Halos “grove” with a tree near check-out or in the store’s lobby. Providing shoppers easy access to healthy fruit fits with shoppers’ demands for healthier items, as 80 percent of shoppers state they want healthier options at checkout, he says. Such displays also show shoppers the store cares about healthy snack options vs. other stores that may not offer such choices, notes Cooper.

“We have seen the magic come out of these in-store displays in multiple points in the produce section,” says Cooper. “We know people are buying on impulse. It’s really vital for retailers to have multiple points of distribution.”