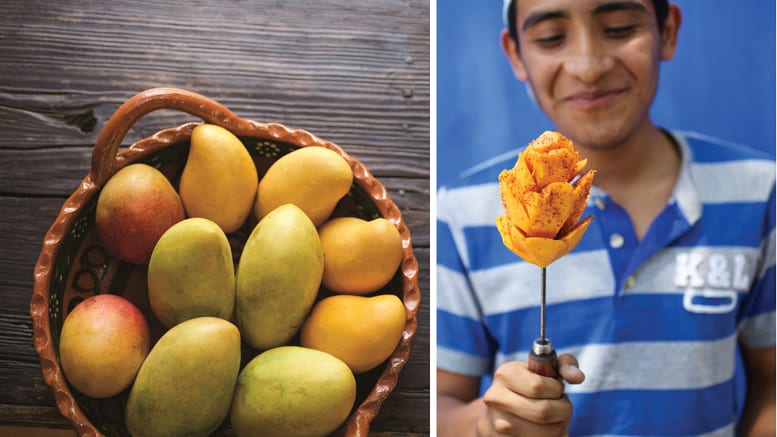 Positioning and robust price points can be key to leveraging tropical fruit year-round. 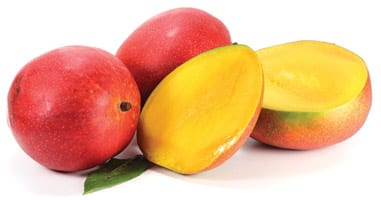 Mexican mangos are helping to keep the cash registers at a number of U.S. food retailers humming, according to industry experts.

“They sell great,” says Daniel Bell, senior produce and floral buyer at four-store Grocery Outlet in Emeryville, CA. “They arrive in as good a quality state as you can hope for, and we get a good range of sizing. Their fruit colors up and eats really well. The Hispanic population — especially in California — gravitates toward it.”

Also citing the popularity of Mexican mangos among American consumers, Ronnie Cohen, principal and category manager for mangos at Vision Import Group in Hackensack, NJ, says Mexico is the largest country-of-origin supplier to the U.S. market, and its proximity to the border allows fruit to be harvested and shipped at the most optimum stage of maturity. “It provides consumers with a high-quality piece of fruit experience and earns a repeat purchase.”

The interest in mangos hinges somewhat on the region. According to the National Mango Board, mango dollar growth outpaced total fruit in 2017. Fruit dollars/store/week grew about 1 percent to $24,658, while staple fruits, such as apples, oranges and melons had declining sales, driving the slow growth of total fruit. Mangos grew 4 percent to $226/store/week and 5 percent to 238 in volume/store/week and remain in the No. 20 position in sales and No. 15 in volume.

To that point, Matt Taylor, assistant produce manager at Tadych’s Econofoods, which serves Wisconsin, Michigan and North Dakota with six supermarkets, remarks that, based on his observations, “it’s really mostly about where consumers live and your store’s clientele. If you’re in a college town, where people are more into trying new things, you’ll sell [items such as mangos]. But here, we don’t even carry papayas, because they just don’t sell.”

Naturally, one factor many consumers base their purchasing decisions on is pricing. “Each region has its price points that generate good sales, but the more aggressive pricing during the peak production periods creates good promotional opportunities, which benefits consumers, Cohen remarks.

“During the summer, the everyday price of two-for-a-dollar will keep your Mexico sales clicking along, but when you go to three-for-a-dollar, look out.”

“During the summer, the everyday price of two-for-a-dollar will keep your Mexico sales clicking along, but when you go to three-for-a-dollar, look out,” says Mark Colvin, category manager and produce buyer at Save Mart Supermarkets, an 83-store chain based in Modesto, CA. “And when you go four-for-a-dollar, it’s ‘Katie bar the door!’ ”

Until 2015, where it saw the highest average yearly and monthly price, there seemed to be no roof on where mangos could go. Over the past two years, impressive growth by Mexico, Ecuador and Peru — the three largest suppliers — has been filling in some of the gaps in supply and helping to stabilize prices.

“I think when you take out the obvious advantage [Mexico] has on logistics, just putting it in a truck versus putting it on a boat, it impacts pricing quite a bit,” adds Bell. “It allows retailers to get a lot more aggressive in terms of retail and promoting the product.”

Positioning mangos in the tropical section, among other fruits, such pineapples and kiwis, is one way to merchandise and help spark sales, Colvin explains. “Unless you’re doing four-for-one-dollar — in which case you’d end-cap them — place them at a walk-in display or separate them off completely and do a spill-in or single table display.”

Bell of the Grocery Outlet notes, “you can take it to an all-fruit-or-tropical-salsa type of display. [Most grower-packer-shippers] put it in an attractive box that allows you to do spillovers, which accommodates promotions.”

Another effective merchandising tactic is to place Mexican mangos in large displays prominently positioned front and center of the produce department, as well as secondary displays. One of the most coveted spots is the checkout line, adds Cohen of Vision Import Group.

Another initiative to help encourage sales is cross-promoting Mexican mangos, says Bell. “They’re a really good pairing with Avocados from Mexico, so it would be huge to tie them in together. They also can be used for savory and fruity-type salsas and pineapples from Mexico.”

Colvin adds that Mexican mangos can be used in things such as salads and teas, “which I don’t think a lot of people have thought about. Mangos can be used as an ingredient and that’s catching on with consumers.”

They also can be sliced, frozen and eaten that way, notes Bell. “It’s almost better than ice cream. I do it in my house.” 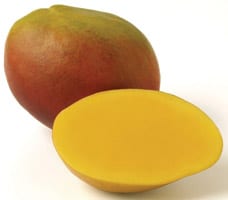 More broadly, conditions in the U.S. market for both organic and conventional Mexican mangos have been stronger than last year despite greater supplies, according to Nissa Pierson, who heads up the organic program for Mexican grower-exporter Crespo. Many growers are reporting a year-on-year volume rise of around 15 percent.

“So far it’s been really great on the organics side,” Pierson tells FreshFruitPortal.com. “We’ve really been neck-and-neck with demand, with a lot of different moments where demand has pushed past supply a little bit. In years past, especially at this time of year, mangos have become very voluminous and prices get really low. The conventional market has also been higher, and demand has been stronger this year, which has helped keep organic prices and demand more stable.”

As well as the planting trend toward early-season production, Pierson explains that over the years, many growers have moved over to the Tommy Atkins variety because of its benefits both for growers and consumers.

“Tommy Atkins tend to survive hot-water baths that resist disease better than some of the others, and they travel better. … So, I think that as consumers learn more about each variety, they’re starting to appreciate the nuances of each and, for the most part, are just enjoying mangos.”

On another front, the sales evolution of the fruit is tied with everything else on the product side from Mexico, says Grocery Outlet’s Bell. “I think, initially, there’s a lot of concern in terms of how safe the product is to consume. But Americans have become accustomed to eating fruits and vegetables from Mexico and are a lot more knowledgeable now, thanks to the Internet and knowing the quantity of product that comes from Mexico versus years ago, when they didn’t know.”

Then there’s the sniff test, he continues. “You can walk up to a mango display and smell the quality. A mango’s a very fragrant fruit and sells itself. I think things like Avocados from Mexico have helped bridged that gap, too, just by association.”

The health benefits of Mexican mangos, of course, are another high priority among consumers, says Bell, who notes they’re high in Vitamin C and fiber. However, he doesn’t believe they’re highly touted by a number of retailers, which can translate into a missed opportunity. “When you talk about antioxidants on avocados, you see the sales on it jump dramatically. I think there’s a lot of market research they could do and figure out ways to really hype how good that piece of fruit is for people. … Avocados from Mexico has done a great job getting that information out on avocados.”

Adds Cesar Garcia, sales director at New Mundoexport Fruits, Inc., in Hidalgo, TX: “We have to focus on education for new consumers because, in my opinion, American people are willing to try mangos.”

Angela Serna, communications manager for the National Mango Board, says one of the board’s primary missions is consumer education about mangos. “We have a direct-to-consumer program that includes heavy public relations outreach. We also do a lot of paid-amplification campaigns as well as work on our SEO strategies, so mango education has a surround sound on all digital platforms. Of course, social media plays a huge role in mango education and serves as a steady drum beat on continuous mango education.”

Although Bell says there’s aren’t many new varieties on the horizon, “some growing regions are continuing to move and get better at exporting quality fruit. Peru, Chile, Mexico, and Costa Rica are getting into the mango business significantly and making it a year-round fruit, much like avocados. I think it’s more like the growing regions coming online and exploring a quality piece of fruit.”

Palmers are the most recent variety that are being commercially grown and being marketed from a few of the exporting countries currently. Cohen of Vision Import points out, “we know there are some experimental groves to see if the production would be viable in their respective territory. So, we will have to wait and see what the next variety will be to complement the existing offerings.”